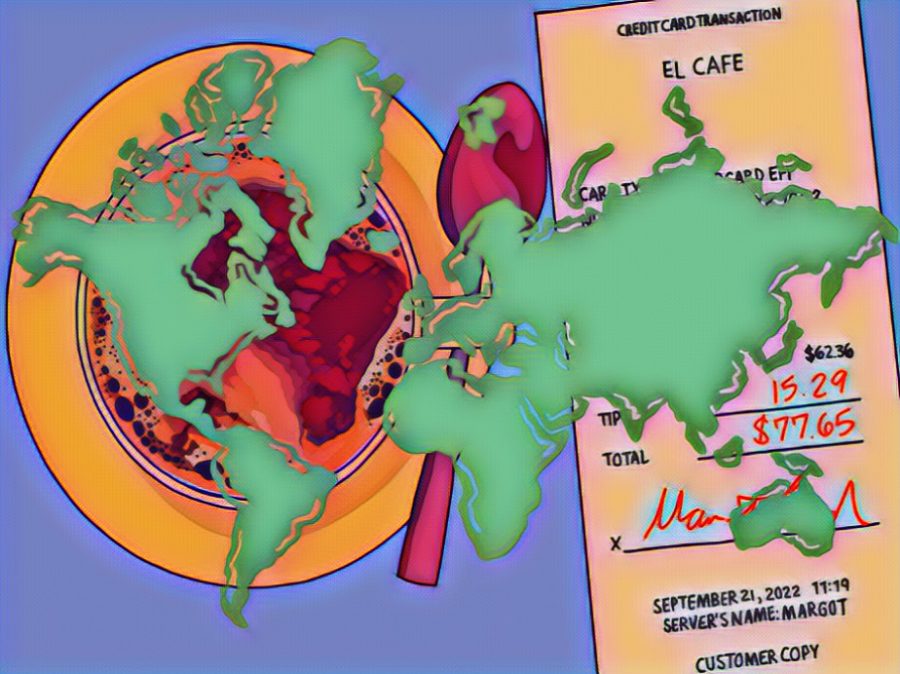 Tipping culture differs in a variety of locations, causing it to decrease in importance, but it is actually what many households rely on for an income due to inhumane paying practices.

Virtually every establishment nowadays has a tip outlet, whether it is a colorfully decorated tin at a takeout establishment or the check that returns to you at a restaurant. But, how important is it to tip? Do you have to tip 15 percent? Why do other countries look down on tips?

There are three categories that states are sorted by in regards to tips. Seven states, California included, require their employers to provide employees with the regular state minimum wage, in addition to the collected tips. 16 states follow the federal minimum wage of $2.13 per hour, so the employees must depend on sufficient tips to reach the tipped minimum wage. The idea is that if your hourly wage with tips does not reach $7.25, your boss must make up the difference. While the idea makes sense in retrospect, Sylvia Allegretto, co-director of the center of Wage and Employment at Berkeley thinks, “it does not happen very often.” This extra money employers owe falls through the cracks, and employees continue to make a subminimum wage. The remaining states also follow a tipped wage, but their starting hourly wage is higher than $2.13.

History of tipping and “penny places”

This inhumane practice by employers stemmed from slavery and was born in the 1900s, because restaurant corporations did not want to pay black workers, so tips from customers were their only source of income. Those working in factories were given 15-minute breaks, in which they would go to “penny places.” They would run in, grab food and slap a penny on the table for the slave that made the food.  Restaurant workers struggled long thereafter, as the 1938 minimum wage law signed by Franklin Roosevelt excluded restaurant workers, who were primarily black women.

The underlying meaning of tips to some individuals is way more than a reward of welcoming service. For some, it is the only way to pay rent and put food on the table. In this toxic cycle of tipping culture, the customer wields the power, and servers are forced to subject themselves to uncomfortable comments, some sexual, to keep the customer happy and yield a tip. Data shows that the restaurant industry has the highest rate of sexual harassment of any United States industry; five times the rate of all other industries.

A Texas waitress, one of the individuals earning the meager $2.13 minimum wage, spoke up at a Senate press conference.

Senators, what would it be like for you if your income depended on the happiness of the people you serve? Because my income depends on the people I serve, I have to put up with a guy groping my butt every day so I can feed my four-year-old son every day. ”

Have you experienced the dilemma of whether or not to tip? Or how much? This confusion can easily be eliminated by a quick Google search based on the location and the service provided.

However, tipping practices are not the same in every country. It is considered rude and insulting in many situations to tip in Japan. In the U.S., if a server receives no tip on a large order, it could ruin the server’s day. In Japan, tipping signifies an offensive display of wealth and pity, and tipping could ruin a server’s day. Although Japan is known for its incredible customer service, tips aren’t incentivized, rather the pride of doing one’s job is. This is the same practice in both Hong Kong and other places in China. Of course, this is not the case in every situation, so it is best to do extensive research before traveling to not offend someone’s culture. It is also important to know each country’s currency because only some countries accept U.S. currency on top of their own.

Then there is the grey area: fast-casual service places such as ice cream parlors, bakeries and coffee shops. While it is not customary to tip on most orders, consider tipping on large or complicated orders, or if the worker is going above and beyond and demonstrating fantastic customer service.