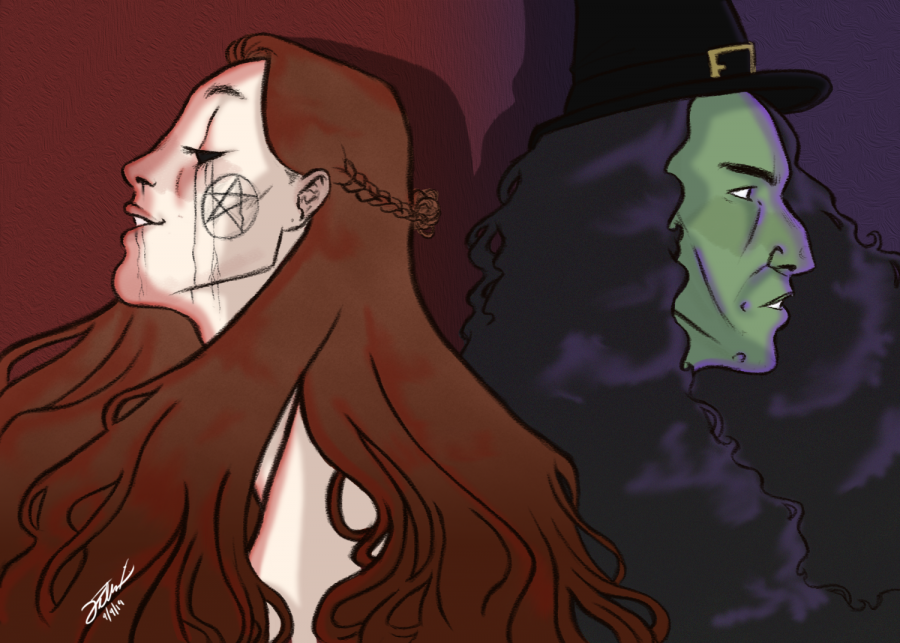 Although the witch archetype has been modernized, it’s origins lie in anti-semitic beliefs.

In forests or in castles, flying around on moonlit nights or lurking in the shadows, witches await in our stories for another child to scare. Every fairytale needs a good villain, and the witch archetype is always on hand to provide a clear villain to drive the central conflict. The witch archetype is commonly portrayed as an old woman, often living alone, who practices dark magic, such as Mother Gothel. Known to be dangerous and powerful, witches lurk as a looming threat in fairytales. As a well-known archetype, making a character a witch is often used to show evil intent quickly and easily. However, this archetype has close ties to hatred and discrimination. This trope frequently uses anti-semitic stereotypes and jew-coding in characters meant to represent evil. Although it may seem innocent at first, many witches are nearly indistinguishable physically, due in large part to the overemphasized stereotypical characteristics.

Early examples in folklore and early fairytales often have much in common with these negative stereotypes. Baba Yaga is a character in old Slavic folklore, portrayed as clever, dangerous and often villainous. In many tales, she is characterized as having a large repulsive nose. This mirrors one of the most major anti-Jewish caricatures. The stereotype of the “Jewish nose” is often used in anti-Semitic media, including Nazi propaganda such as “The Eternal Jew” and “The Poisonous Mushroom.” While in early folklore it was likely not initially tied to antisemitism, the feature is used in modern times to code characters as Jewish. Many other witches in fiction have demonstrated the same trait, which has become heavily tied to anti-Semitism.

Mother Gothel and The Blind Witch clearly reflect the idea of blood libel. Blood libel was a charge frequently leveled at Jewish people during the Middle Ages. People believed that any time a gentile (non-Jewish) child went missing that Jewish people had kidnapped and killed the child, either for ritual purposes or to use for food. Mother Gothel is a witch who imprisoned a young girl from birth. Although early versions of the tale characterize the witch differently, in Disney’s “Tangled,” the movie through which most people know the story of Rapunzel, Mother Gothel is shown to be imprisoning the girl to use in magic in order to survive, displaying a direct parallel to the belief that Jewish people would use a child in rituals. In addition, The Blind Witch of “Hansel and Gretel” is shown luring children to kill and eat them. According to the original Grimm Brothers fairytale, “When a child fell into her power, she killed it, cooked and ate it, and that was a feast day with her.” This is one of many tales that directly parallels accusations of blood libel, in a story that is still commonly known as a children’s story.

Although many archetypical witches can tend to lean heavily on anti-Semitic tropes, many modern witches have gone in the opposite direction, leading to a rise in different types of witches. Glinda the good of “The Wizard of Oz” and associated works is often portrayed as a good witch, bubbly and glowing and altogether not stereotypical. Indeed, more and more good witches have been portrayed in recent fiction, embodying positive ideas and traits. Witches such as Morwen from “The Enchanted Forest Chronicles,” often directly oppose the archetypical witch, subverting the archetype entirely.

It is entirely possible to use a witch character without being anti-Semitic, but it’s important to consider that people continue to lean into these anti-Semitic tropes in the portrayal of witches. The archetypical witch often directly mirrors anti-Semitic tropes. The Wicked Witch of the West from “The Wizard of Oz”, who is arguably one of the most well-known witches in modern fiction, is portrayed with a long hooked nose, so frequently used in anti-Semitic “Jew-coding.” The portrayal of such traits as being associated with evil in media for children sets a dangerous precedent.

It can be enjoyable and easy to put a witch into a story, either as a villain or a possible red-herring to throw readers off. However, it is important to consider the message this archetype often sends. While the archetype itself is not inherently bad, portrayals often lean on anti-Semitic tropes as shorthand to make the character seem evil. The next time you attempt writing a witch, be careful with the characteristics to avoid turning an easy villain into an anti-Semitic caricature. Be sure to think about the ‘witch’ message you want to send.