The overbearing bonds of church and state 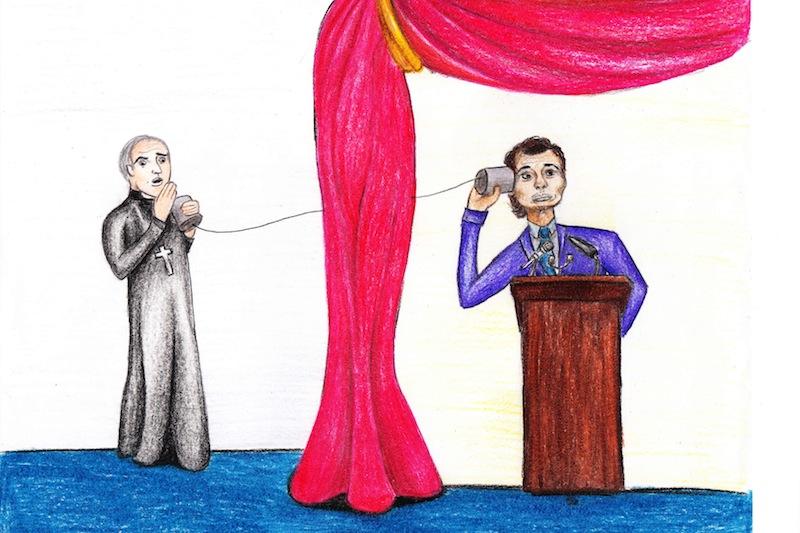 The United States: a country founded on religion and a government founded on democracy.  But which do we put first?  Although the Constitution never clearly states that there shall be a “separation of church and state,” it is undeniably implied.  So if the 1st Amendment to the Constitution declares that “Congress shall make no law respecting an establishment of religion,” why is the influence of religion in government (that is, Christianity) so blatantly obvious, and how much does it obstruct the principles of democracy?

As we have all learned (yet may not remember), the Puritans, a Protestant sect of zealous religious devotees, played a pivotal role in the foundation of American society.  Their success as one of the first colonies made them “A City Upon a Hill” to the rest of Europe, thus cementing the role of Christianity in America.

However, in opposition to this religious fervor, the United States Constitution was written by the Founding Fathers, who were disciples of the age of Enlightenment, an era of reason rather than religion.

And thus a long lasting ideological conflict was born between religion and reason, society and government, cultural beliefs and democratic ideals.

The entity dominating this conflict has been and still is Christianity.

Look upon any bill or coin and staring back at you is the famous American phrase, “In God We Trust.”  Recite the Pledge of Allegiance and hear yourself say “One nation under God.”  Elect a president and watch him sworn in with one hand on the Holy Bible and the other raised high. Testify in court and find yourself pledging honesty to the Bible.  The influence of religion in government is inescapable, and thus the government contradicts itself.

Separating church and state is a fundamental principle of democracy.  By allowing the two to intertwine we may not persecute other non-Christians but we create a strong bias for those who are.

There has not been one president who is not a Christian.  A list of the religious affiliations of the 113th Congress shows that 90.5 percent of Congress men and women are of some branch of Christianity.  When a politician does something un-Christian they are forced to apologize for public opinion, even if it doesn’t change their policies, or actions for that matter.

With the prominence of Christianity, we have created a partial government rather than an objective one, corrupting the actions of all branches of government.

For example, laws promoting intolerance, such as those banning gay marriage and abortion, stem from the morals of Christianity, clearly exemplifying cases of religion impeding the ability of the government to fairly provide its citizens with equality and freedom.  Judges and juries have ruled on cases through the bias of Christian morals.  The president has to live up to Christian standards and conduct affairs in accordance with proper Christian customs.

However, some may argue that the overarching influence of Christianity is reflective of the views of the people and that the impact of Christianity holds a certain moral standard for the government to abide by which in turn promotes fairness for the individual.

But this most certainly is not the case.  The true greatness of this country is at the heart of the melting pot, the uniquely eclectic blend of customs and cultures, people and ethnicities, beliefs and religions.  This diversity is what makes America so lasting in stature and so adaptive to the changes of the world.

Even though in the United States 77 percent of people identify as Christian, yet 20-30 percent of those Christians say religion is not important in their daily life, revealing that many must identify with it due to societal (including governmental) influence. Choosing one religion to revere our government cuts off diversity and monopolizes the nation to one set of standards, one moral code, one template of living.  By choosing one religion to revere, we force our posterity to conform to a Christian life instead of allowing people to think for themselves and arrive at their own conclusions.

Let us not forget that among the Puritans were Quakers and Native Americans, slaves and slave owners, prisoners and lawyers, aristocrats and peasants.

In the long run, our nation’s greatness comes from the ability of its citizens to think for themselves, which is the principle behind this country’s founding, and is the reason why we continue to be a nation.

This principle of democracy is what makes us “A City Upon a Hill,” and shouldn’t be inhibited by the immersion of church and state.