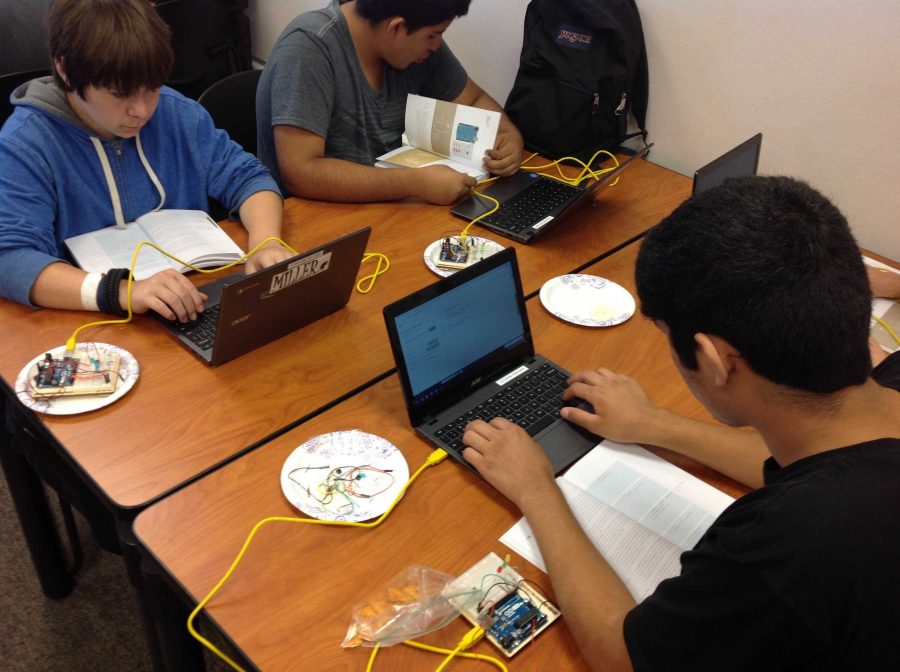 After weeks of learning about and experimenting with Arduino boards, students in the D-Tech Academy presented their group projects during Foothill Intervention, Reinforcement, and Enrichment Program (FIRE) on Tuesday, Dec. 8.

After weeks of learning about and experimenting with Arduino boards, students in the D-Tech Academy presented their group projects during Foothill Intervention, Reinforcement, and Enrichment Program (FIRE) on Tuesday, Dec. 8. Ranging from stopwatches and alarm clocks to games of “Simon Says,” teams created their own circuit board projects.

A lot of preparation went into these projects. Students first had to learn the basics of coding and circuit board design.

D-Tech Advisor Kurt Miller introduced the project by allowing students to self-direct themselves through an Arduino “textbook” with instructions. They “went through a bunch of projects from the book that showed them step-by-step processes.”

One group was successful in their endeavors to build an alarm clock.

However, some of the other teams weren’t as successful in completing a fully functional project. Sophomore Aiden Holcomb planned to create a stopwatch.

“It was working at first, [but] some of the circuitry was out of place. A lot of the instructions we used online were incorrect,” Holcomb said.

Sophomore Martin Gama encountered difficulties as well when he couldn’t find a clear example picture to go along with the instructions of his project, which was a thermometer displayed through LED lights.

Miller took these obstacles as an opportunity to teach students about the importance of detailed documentation when creating prototypes.

Students saw “the limitations of projects posted online, [and] the issues with documentation and schematics. Some of the students have this mentality that they can just, kind of, wiggle their way through it, but when it comes to coding and circuit design, things have to be very precise. That’s one of the things they noticed.”

Despite drawbacks in his project, Holcomb enjoyed the opportunity to use Arduinos.

“It was kind of fun to work with these […] Arduinos because it was new. It’s not necessarily something a lot of other schools have, it’s sort of isolated to this one. I haven’t really seen any other high school that works with 3-D printers or Arduinos in our area,” Holcomb said.

Holcomb also said it was fun to just understand how circuitry works, and “to learn how basic electrical engineering is done.”

“The issues came in the project when they had to kind of figure out the gray areas, when they had to learn their own sort of processes. Some of them were able to do that, and other students not quite as much. So, we’re seeing the limitations in what they know, which is a very important thing. You can’t assume you know everything,” Miller said.

Next, Miller hopes to take on 3-D printing. The students will “learn the principles of 3-D printing and 3-D design,” and then construct their own rockets.