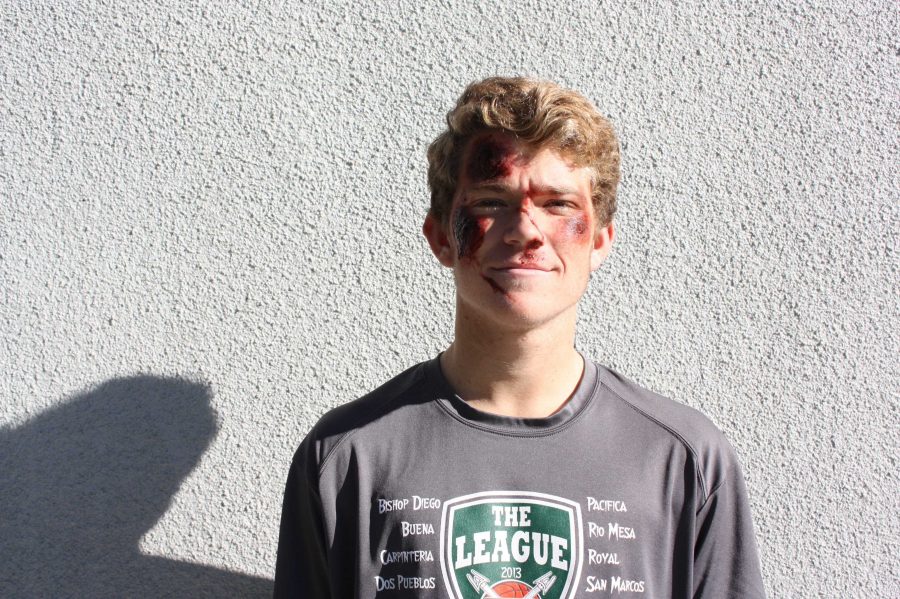 Junior Kevin Waechter died in the hospital after a drunk driving accident in the Every 15 Minutes simulation. Credit: Jessie Snyder/The Foothill Dragon Press

Junior Kevin Waechter feels like a “changed man” after his death was simulated as part of “Every 15 Minutes.”

Junior Kevin Waechter feels like a “changed man” after his death was simulated as part of “Every 15 Minutes.”

Waechter played the part of a drunk passenger involved in a DUI collision after leaving a simulated party with drunk driver and junior Rhiannon Tircuit. The crash left senior Lauren Dalmatoff (the passenger of the struck car) dead on impact.

Ventura Fire and rescue crews had to extract Waechter from the vehicle in order to safely remove him from the car while taking cervical spinal precautions. Waechter had no idea exactly how the process would take place.

Waechter described how the simulation made him think about the reality of drinking and driving.

“When I was taken to the hospital, I realized that for me, this is fake, however this actually happens to a lot of people in the world for real,” Waechter said. “I want everyone to know that no one is really safe while driving, even if you are just driving on the road, you are still at risk of getting hit. I’m just lucky that all of this is fake and I’m actually alive.”

On the second day of the event students attended a funeral for Waechter. His coffin sat in front of Foothill juniors and seniors as his parents read their final goodbyes.

“My mom had to write my eulogy and her impact statement for a child that was not really dead,” Waechter said. “This event affected my parents and I from the beginning, to the crash scene, and all the way up to the hospital. I kept thinking to myself throughout the process that even though this is fake for me, this happens to people every day and that’s what impacted me the most.”

Every 15 Minutes has changed the life of Wector for the better and he hopes it will change others lives too.

“I wanted to be a part of Every 15 Minutes because it was going to help me in life when I come across a tough decision on my driving and hopefully save my own and others’ lives.”