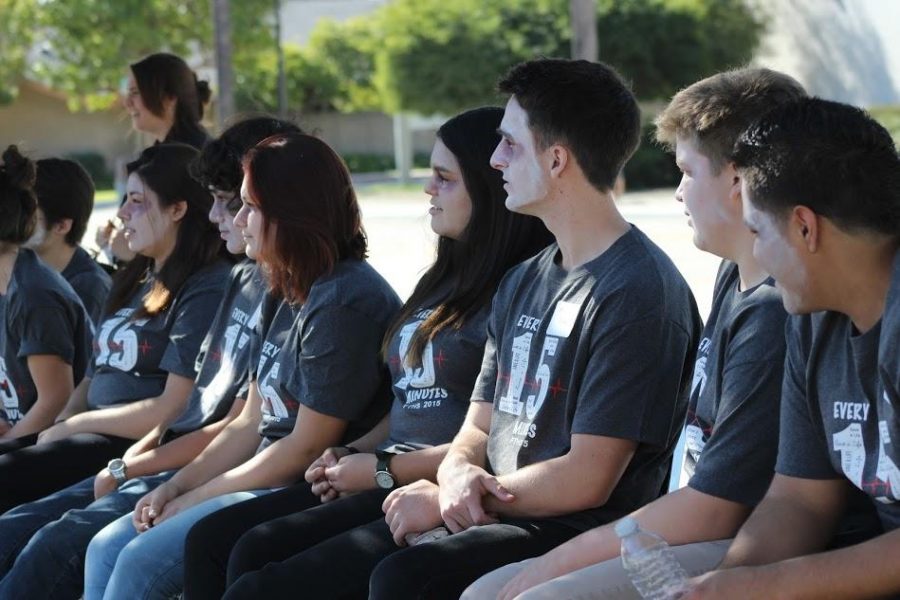 Senior Austin Shaw (third from the right) hopes that the simulation teaches students that anyone can be the victim of a driving while impaired accident. Credit: Rachel Horiuchi/The Foothill Dragon Press

“Even through what I saw leading up to [Every 15 Minutes] and what I knew was going to happen, I still was tearing up. I think the message itself is very powerful and I hope it’s effective,” senior and Every 15 Minutes participant Austin Shaw said.

“Even through what I saw leading up to [Every 15 Minutes] and what I knew was going to happen, I still was tearing up. I think the message itself is very powerful and I hope it’s effective,” senior and Every 15 Minutes participant Austin Shaw said.

Shaw decided to participate in this event because he believed that it was a “great message” which was “proved by what we saw today.”

Shaw, along with 16 other students, was chosen to be one of the “living dead.” These students represented the statistic that a person is killed or injured every 15 minutes by a driver under the influence.

“One of the goals of student involvement and participation in the event was to get a diverse group of kids from all different peer groups,” Shaw said. “We, the living dead, really got to delve into the topic of impaired and distracted driving, and we are meant to take what we have learned and further spread the message throughout the school.”

Senior Troy Kauffman was “devastated” by his long-time friend’s “death.”

“He had such a bright future ahead of him,” Kauffman said. “It is horrible that such a wonderful human being was taken from this world for such a stupid reason.”

Kauffman described Shaw as a hardworking person and selfless friend that “could always cheer you up and put a smile on your face.”

“When I imagine the future, everything is a bit hazy. But, it is very clear to me that I want Austin at my side. And he wants to be there for me. If I were to lose Austin, I would be losing the clarity of my future,” Birch said.

“It’s actually a little ironic because Austin teases me that I always act like I’m never going to see him again, whenever we say goodbye. Well I’m going to continue to do so. The simulation emphasized the idea that life is terribly delicate. I never know for certain that I am not saying goodbye for the last time.”

Being able to participate in the program allowed Shaw to take the topic of distracted driving more seriously.

“To me, the simplest yet most important message that really benefited my view was the fact that nobody thinks this can happen to them. They don’t think it is possible for them to make a poor choice and end up as a plain statistic,” Shaw said.

“I’ve learned from this event how easy it is to become one of those horrible statistics or crashes and death, despite what we might believe. It can happen to anybody, and I want to make sure it doesn’t happen to me or anyone else I know.”