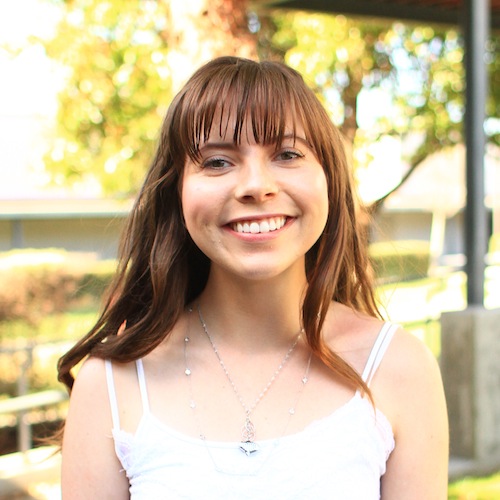 They say that the best way to overcome fear is to face it; Sara Jane Patterson chose to write a speech about it. She chose to do her presentation on her own fear of public speaking.

Patterson has experienced a fear of public speaking for quite sometime, making the 12 minute presentation both nerve-racking and ironic.

“I decided to use this opportunity to learn more about my fear of public speaking instead of trying to suppress it, ignore it, and be ashamed of it,” she said.

Embracing her fear, the idea for the presentation came naturally for Patterson as she thought of the unbearable day.

“One day, I was just imagining having to give my presentation and dreading how nervous I would be and how awful it would feel during that whole time period surrounding that day. That’s when I realized that the fear I had for that presentation day is a topic in itself,” she said.

After arriving to her choice of topic, Patterson has to overcome the task itself. She hopes that the topic will resonate with others and help in solving a problem that personally affects her.

“Hopefully my project reveals that I am owning my nerves and trying to overcome them. I am a senior, and I still dread any type of public speaking and I’m choosing not to let it dominate my communication, how others perceive me, or how I perceive myself,” she said.

Patterson is not alone in her fear. Commonly referred to as glossophobia, the fear of public speaking affects 75% of people.

“It’s a phobia that’s so incredibly common; it’s not something that should make you feel less than. Because I found ways to help this problem, other people can decide to do it for themselves,” she said. “That doesn’t just go for this phobia, but any obstacle in life. We can accept, learn, and try to grow.”

Melanie “Captain” Lindsey, senior advisor for the Dragon Talks, decided to create a club next year that would help students become better public speakers in preparation for their Dragon Talk after listening to Patterson’s speech in class.

Patterson hopes that not only will the club help future students with their presentations but that her talk will be relatable to the students.

“From my speech, I at least hope that they realize how much they are not alone with this fear and that everyone has the potential to diminish it,” she said.

Like most of her fellow seniors, Patterson has spent large amounts of time preparing to deliver her message and hopes that her audience, who are hearing their speeches for the first time, will be receptive.

“Wednesday is something totally new, because my audience will be freshmen who don’t know me. I don’t know if they will participate as much as the seniors did or be as friendly of an audience. But I am excited to share my message and I really hope they benefit from it,” she said.