The Foothill Dragon Press • May 22, 2013 • https://foothilldragonpress.org/4936/news/seniors-receive-recognition-for-hard-work-at-annual-senior-awards-night/ 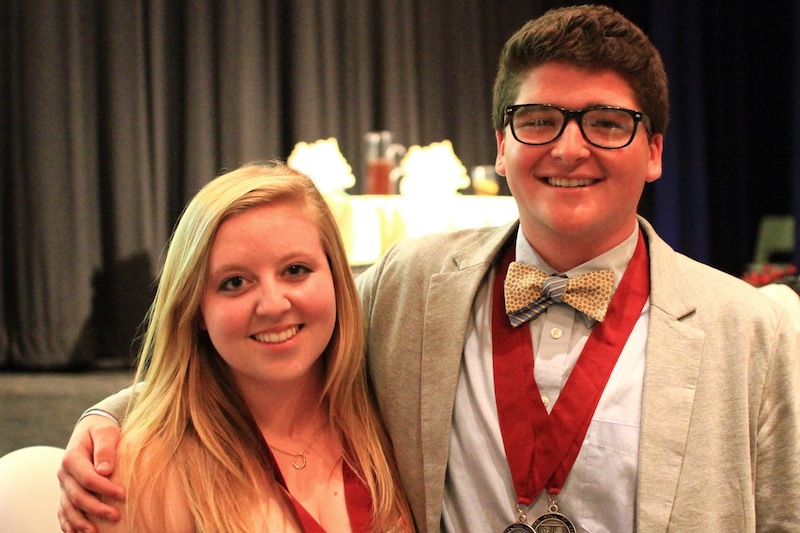 The crowd that gathered in Buena High School’s auditorium on Tuesday night hushed as Senior Class Advisor Melanie “Captain” Lindsey called for the beginning of Senior Awards Night, and for an end of the seniors’ high school career.

Senior Awards Night is an annual event that serves to recognize the graduating class for their hard work in courses such as Bioscience, ASB, Speech, Language, Journalism, and more. Other awards, such as Most Inspirational, the Phoenix Award, Scholar Athlete and Best All Around Female and Male, serve to honor excellence within the senior class. {sidebar id=81}

“Students have done a lot all four years, and sometimes they can feel like it’s not being recognized or noticed, especially if they don’t get into the school they wanted or something like that. So this is a way for them to feel good about themselves and see all the accomplishments that they have done and what their peers have accomplished,” Senior Class Advisor and art teacher Justin Frazier said.

The event began by honoring students who had received scholarships from organizations like Project Understanding, the Ventura Unified Education Association, the Philanthropic Educational Organization and more. Students were then recognized for their participation in activities on campus, such as the California Scholarship Federation, F.I.R.E., and National Art Honor Society.

“It felt really nice, I’m not gonna lie. Often times I will be working really hard on homework and stuff and I don’t really see how it’s important to be doing this, and it doesn’t seem like it will be recognized,” Park said. “But the fact that it is worth mentioning makes it really rewarding.”

Nominees and winners for the Dragon Hall of Fame awards were announced next. These awards are given to students who exceeded expectations in specific courses at Foothill.

Senior Megan Lenington received an award in the Dragon Hall of Fame for Fine Arts. The nomination was such a surprise to her that she began tearing up as she walked up to the stage to receive her award.

“The nomination for the Dragon Hall of Fame was a complete and total shock. I have put three years into the drama department and it has been my entire life. I love it so, so much. To be recognized for that is just indescribable how excited I was, I began tearing up,” Lenington said.

“The criteria for Best All Around include academics, leadership, community service, extracurricular activities, and the most important, having a lasting impact on the school,” principal Joe Bova said.

Senior Stephen Mariani, who is graduating with a 4.47 GPA, is ranked fifth in his class, is a Finish Strong nominee, and an honors graduate, received the award of Best All Around Male.

“I was not expecting it at all, it’s amazing. But I’m also more proud of our class overall and all the awards people have received today,” Mariani said.  “It’s weird because a year ago I wouldn’t have thought that I would be doing all this now, and to be able to see where people are going to go and what people are going to do, it’s all exciting.”

Following, it was announced that senior Hayley Abourezk-Pinkstone received the award of Best All Around Female, specifically for her well rounded-ness and for taking initiative to improve the lives of others. She will be graduating with a 4.5 GPA and as one of the three Valedictorians.

“It was really exciting. I had no idea, and it was a total surprise. It’s a great accomplishment, especially here at Foothill,” Abourezk-Pinkstone said.

At the end of the event, senior Annabelle Warren was the winner in a laptop drawing.

Senior Awards Night was intended for the seniors to “leave high school knowing what they have achieved,” as well as “inspire them to work hard in the future,” according to Lindsey.

“I thought it was great,” senior Megan Lenington said. “I thought the theme was awesome and whimsical, and Captain and Frazier were hysterical, I love them. You can really tell how much each teacher cares about all the students, and how they want to ensure the education of all of us and make sure our senior year is the best it can possibly be, and that we excel in every possible light.”