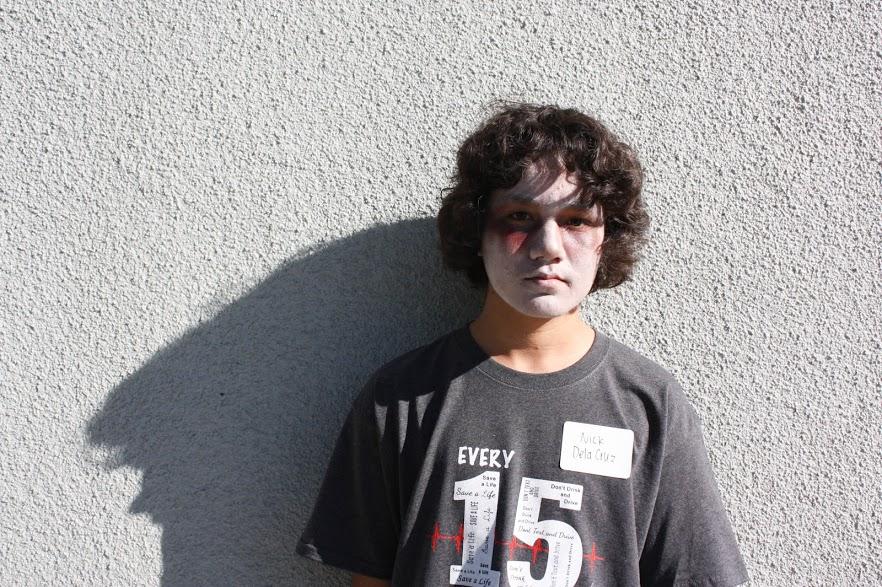 Junior Nick Dela Cruz played the role of one of the "living dead" in Every 15 Minutes 2015. Credit: Jessie Snyder/The Foothill Dragon Press

For junior Nick Dela Cruz, participating in Every 15 Minutes as a part of the living dead was one of the “most powerful experiences” of his life.

For junior Nick Dela Cruz, participating in Every 15 Minutes as a part of the living dead was one of the “most powerful experiences” of his life.

On the first day of Every 15 Minutes, Dela Cruz watched the car crash simulation from special seating with his fellow living dead.

The living dead then spent the night in Foothill’s “black box” without access to their phones or other technology in order to simulate the feeling of being dead.

During the second day, Dela Cruz took part in the procession of the living dead and actors and sat with them during the funeral, in which his mother, Barbara Meyer, read his eulogy.

“It’s a difficult feeling to describe, having your mom cry about you in front of half of the school. It’s intense. […] I was choked up inside, I really wanted to go up there and hug her for the entire thing, but I knew that I couldn’t and I just had to sit down and stay there and take it. […] It put me to tears, definitely,” Dela Cruz said.

Dela Cruz described how Every 15 Minutes made him realize the devastating reality of drunk driving.

“I see it as a much bigger deal, I always thought of drunk driving as. ‘Oh, you’re probably going to mess up someone’s mailbox and they’re going to be mad about it,’” said Dela Cruz, “but, seeing these real life victims of drunk driving made me realize how huge of a deal it really is.”

During the funeral, a courtroom scene was shown in which the drunk driving actress Rhiannon Tircuit was given seven years in prison as a consequence for her actions.

Dela Cruz stated that after “seeing how [drunk driving] ruins others’ lives,” seven years of prison seemed like “nowhere near enough time.”

Overall, participating in Every 15 Minutes changed the way Dela Cruz will act in the future.

“Honestly, I probably would have texted in the car before this, but definitely not now. I just can’t imagine someone doing that now,” Dela Cruz said.

“I am going to be a lot more harsh with people who text and drive or drink and drive, and on myself too.”