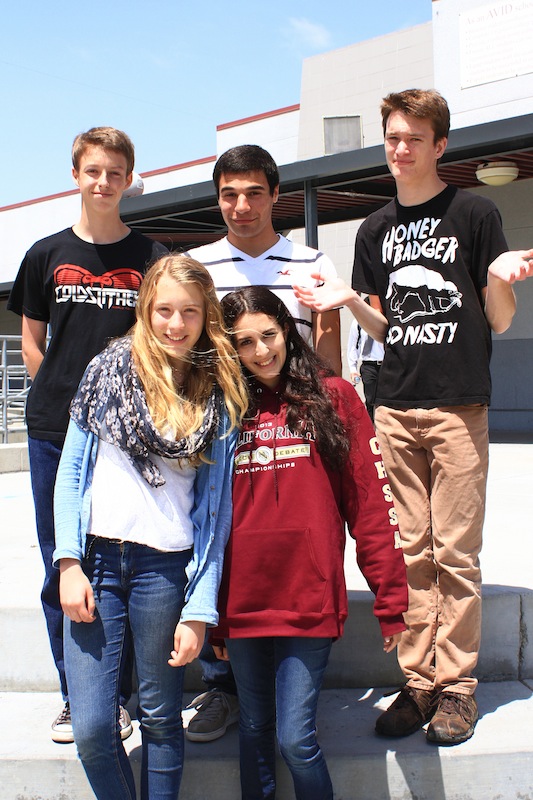 In a club where the secretary has to make pies, the vice president can overthrow the president, and “quote recorder” is a position, it may seem like it would be difficult to get anything done.

The speech and debate team, however, manages to defy this assumption again and again.

This year was no exception, with six members qualifying for state and two qualifying as alternates in nationals.

English teacher and speech coach Jennifer Kindred began the team when she came to Foothill in 2003 after unsuccessful attempts to start one up at Ventura High School, where she’d had to compete with too many other electives and could never get more than five members.{sidebar id=75}

She now coaches the team alongside math teacher Anthony Villa. This year, the core group is about 15 students, though it has gone up to 50 in past years.

Kindred also teaches the speech class at Foothill. Though some of the debate members are in the class, it is separate from the team and focuses on drama along with debate. The team has practice every Tuesday and Thursday after school, where they prepare for upcoming debates.

There are four different types of debate they compete in.

“These are the adrenaline junkies,” Kindred said.

In the other forms of debate, Public Forum Debate and Congressional Debate, the participants are given roughly a month to prepare for the topic. Congressional Debate is a group debate in which students present resolutions and debate the merit of changing laws. The structure is very similar to that of the actual U.S. Senate, with a senate chamber, a presiding officer, and a system of priority for speaking. The more times you speak, the less priority you have.

In Public Forum, the debate is done with a partner. The pair prepares and researches the given topic before the debate. They have to know about and be ready to defend both sides, because during the debate they are required to rotate between the affirmative and negative between each round.

Juniors Ana Bello and Ami Ballmer have been Public Forum debate partners since their freshmen year. Ballmer said that although she has dedicated a total of over a hundred hours to debate preparation, most of it is more fun than arduous.

“It’s not as big of a time commitment as people seem to think it is,” she said. “Plus, all the time you spend prepping is really more like half research, half eating pita and joking with Mr. Villa.”

Senior Adam Braver, who qualified for state this year, joined the team as a sophomore to improve his speaking skills.

“When I was younger, I had a speech impediment and on top of that, I didn’t start speaking until I was five. My speaking wasn’t that bad in my freshman year, at least I don’t think I was, but I did it to improve my speaking skills, originally,” he said.

Now, as a senior, he said the team has taught him a lot about “the art of politics and what it takes to be a good speaker,” but it has also done a lot more for him than that.

“Through speech and debate, I gained a lot of upperclassmen friends, especially as a sophomore, and later as a junior. I’ve learned a lot from them,” he said.

Ballmer, too, said that one of the most valuable aspects of being on the team is the friendships she has made.

“High school would not be the same without speech and debate. It’s made me really learn how to communicate efficiently and convey ideas, but even more importantly, it connected me to some of my closest friends,” she said.

Kindred said that while winning is nice, it has never been her or Villa’s main goal for the students.

“What I’m hoping for from students is the same thing I got in speech and debate, which is an added confidence that I didn’t have before,” she said. “I was super shy and quiet and like a wallflower kind of person, if you can imagine. And speech and debate brought me out of my shell,” she said.

Along with added confidence, Kindred hopes to create a community with speech and debate.

“I know that participation also binds you to a group of people and it gives you a sense of belonging. And that’s true whether you’re on a sports team or band and that’s, I think, vital to high school,” she said.