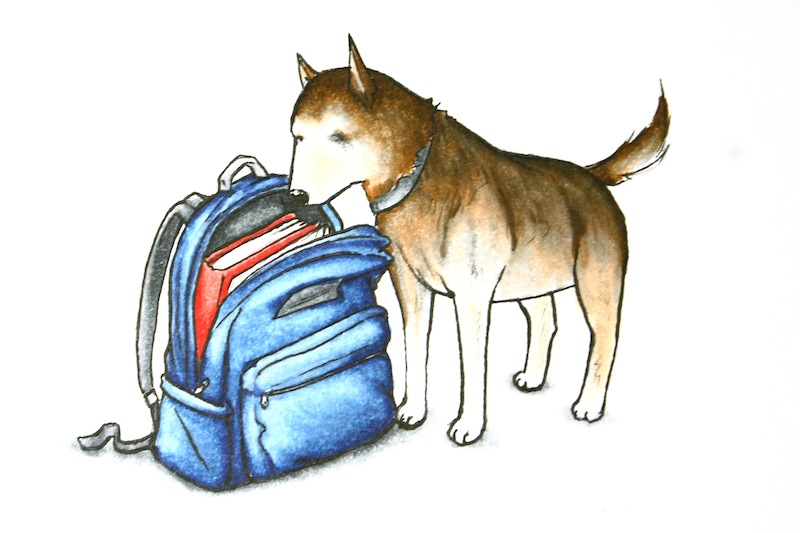 Due to rising concerns of drug use by students in the Ventura Unified School District, the school board has decided that it is in the best interest of the high schools to allow drug-sniffing detection dogs in classrooms.

For the past six years, dogs have been used to search locker rooms and parking lots of district schools, but they have never been used in classrooms.

“There was concern from high school principals and a lot from parents about drugs on campus, and checks in parking lots and locker rooms are very limited,” said Kyunghae Schwartz, director of VUSD Student Support Services. “We looked at the evidence – the number of suspensions and expulsions and that kind of thing – and we thought maybe this should happen.”

Other Ventura County public schools have used detection dogs in classrooms for several years; however, using the dogs in Ventura Unified for classroom checks was proposed in spring of 2012.

“At first I was really opposed to it, and I think my exact term was that it was a ‘culture killer,’ ” principal Joe Bova said. “Now I think the district has evolved, and we have evolved, and there is a consensus that the safety of students has outweighed the negative effect it may have on the school culture.”

Part of Bova’s new toleration of the idea of using dogs in classrooms stems from his fear that there has been an increase in drug use in previous years due to the growing use of prescription drugs and medical marijuana.

Bova also feels that the dogs, which are also trained to detect gun powder, fuels, and other accelerants, may help remedy the recent heightened fear of school shootings.

“It is not just a drug thing. This will help with safety in general, as well,” he said.

Although previously the dogs were only used quarterly to search the parking lots and locker rooms, they now will be brought into Foothill classrooms once a month.

The process used to select classrooms for inspection is random, and classrooms that are searched once are not exempt from further searches.

Before the dog is taken into the room, students must exit while leaving their belongings in the class. The dog sniffs the air around the backpacks and alerts the officers if it gets a “hit.”
Classrooms searched for first time March 22
During second period on March 22, the dogs were taken into Foothill classrooms for the first time. Although 10 classrooms were randomly selected, only six were searched due to lack of time. Bova estimates that the searches were longer than usual because it was the first time the dogs had been used at Foothill.

Education in the Digital Age teacher Kristen Pelfrey’s room was one of the six classrooms searched, and she said she did not feel that it was time-consuming.

“I didn’t feel it was a disruption. It took less than five minutes and then we moved right on,” Pelfrey said.

Pelfrey believes that the goal of safety is commendable and the request for five minutes is reasonable.

“I am not an expert, and I don’t know what the outcome will be, but the safety of my students is the bottom line and that will always be my bottom line,” she said

Honors World History and AP Government & Economics teacher Cherie Eulau, however, disagrees with the philosophy of using dogs in the classroom.

“It is treating everyone as though they are guilty, and that is a Stalin-like slippery slope. I don’t like the atmosphere that it creates,” Eulau said.

As a result of the search, two students were suspended. Bova estimates that the dogs incorrectly hit on four or five other backpacks that did not contain any drugs.

Junior David Astorga said he was called out of class for having a Mexican lollipop in his backpack that supposedly contained the drug tetrahydrocannabinol (THC). Having gotten the lollipop from a jar in his kitchen, Astorga did not believe there were any drugs on the candy. His parents were called and the hit was assessed as false. No disciplinary action occurred.

“I was astonished, and I couldn’t believe it was actually happening because everyone was sort of just treating it as a joke,” Astorga said. “It was almost embarrassing, too, when Mrs. Kindred put her arm in front of me and told me I couldn’t go back into the class.”
Students divided on the new policy
Students debated the possible repercussions and effectiveness of bringing the dogs into classrooms at a Foothill Political Action and Awareness Club meeting shortly after the decision was announced last month.

PAAC member and freshman Keegan Bell feels that using the dogs is a breach of his rights.

“I was raised in a libertarian household, and I take my rights as guidance. I believe this is an infringement on my right to privacy,” Bell said.

“Kids expect safety when they come to school,” Mariani said. “The intent is not to expel kids but to deter them from bringing drugs to school in the first place.”

Schwartz emphasizes the philosophy of safety.

“Our focus is to do these safety checks in a respectful way. We don’t want to be punitive or threatening or invasive,” Schwartz said. “This is not about punishing but keeping schools safe and getting students with substance abuse some help.”