“A competition to the death.” How eating disorders are affecting teens 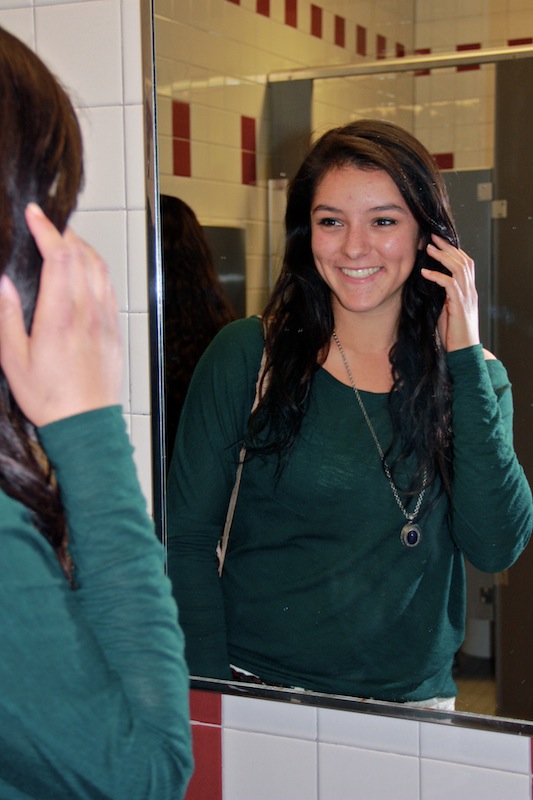 Every day when she was in eighth grade, senior Amanda Torres would play what she calls the “I hate myself” game while her teacher went over the daily class agenda.

“I would list from head to toe every different part of me that I disliked,” Torres said. “So to say that I was sad and hated on myself is an understatement.”

Torres’ low self-esteem led to her developing an eating disorder. She was later diagnosed by a therapist and a nutritionist as having anorexia nervosa.

Although there is no known direct cause of eating disorders, many different factors can lead to them. According to an article by Teens’ Health, some factors that trigger eating disorders are depression, anxiety, puberty, academic stress, peer pressure, body image and media influence.

Eating disorders are extreme, unhealthy eating habits that negatively affect a person’s overall health. Common eating disorders include anorexia nervosa (eating little and essentially starving one’s self), bulimia nervosa (eating a large amount food at one time and purging it out of the body through vomiting, laxatives, or extreme exercise), and binge eating (compulsive overeating). They can result in extreme immediate and long-term consequences. {sidebar id=73}

Malnutrition, dehydration, and electrolyte imbalances are just few dangers associated with eating disorders, however there are thousands of consequences to these risky eating habits.

Eating disorders commonly start during the prepubescent and teenage years. They can affect both girls and boys, but disproportionately affect girls as roughly 85 to 90 percent of those suffering from eating disorders are female.

Torres believes her eating disorder was caused by a lack of self-esteem. After her diagnosis, she confided in her friends and family. During her recovery, she realized how influential the disorder was in her life.

Fellow senior Vanessa Lopez developed bulimia nervosa in middle school. She would not eat all day, and what she did eat, she threw up.

“I puke when I’m nervous — but it’s like when I’m really, really nervous. So one time that happened, and I was like ‘Oh,’ and I didn’t eat like the whole day and I was like, ‘Oh, I could get used to this,’” she said. “I started out experimentally, and then towards the end I was like, ‘Oh my god. I need this to stay fit and to stay, like, happy.’”

Lopez traces the cause of her disorder to lack of self-esteem and confidence in her body in elementary and middle school.

“I had always had body issues all the time. Just throughout elementary school I was always the biggest in the class, you know. Always like the fat girl,” she said.

Her experiment soon became habit, and over the course of little over a year she lost a lot of weight. She soon realized that her routine wasn’t good for her, and she stopped gradually. When she came out about her issue to her 8th grade class, Lopez recalled that while the girls understood her predicament, the boys weren’t as sympathetic.

“A lot of guys, they were like, ‘Wow. That’s a typical girl. Of course she’s going to do that.’ I think… and people joke around about it all the time. ‘Oh yeah, I’m anorexic,’ or something like that,” Lopez said. “I don’t think people take it seriously enough and I don’t think there is a good enough support system for people who do have those self-esteem issues and who do go to that level of trying to feel pretty and stuff.”

Eating disorders are a common issue among teens, and after Lopez came out about her disorder, she said that she was approached by other girls who were going through the same issue and thought she was brave for coming out.

For some, like Torres and Lopez, eating disorders are akin to a game where the end goal is to look beautiful and thin. However, the process is unhealthy and dangerous. Lopez would feel accomplished with her results, especially when she received compliments from her peers.

Foothill nurse Mary Johnson has seen many eating disorder cases over the past 13 years working in the district. The most serious case she’s seen was with a boy who had to be sent to a rehabilitation center in Los Angeles. Students who are diagnosed by her must receive medical attention.

“If it’s bad enough, it changes a life, and it’s really life threatening. So it’s hospitalization and therapy and medication, the whole treatment,” she said.

When asked what she believes causes eating disorders, Johnson’s answers matched what most researchers say.

Because of Foothill’s high stress environment, Torres’ therapist has seen a few student clients from the school for eating disorders.

“Foothill is, in some respects, a breeding ground for eating disorders,” Torres said.

Both Lopez and Torres don’t see themselves falling back into their old habits.

Lopez said, “I’ve done fine without it for three years. I don’t need to go back to it. I feel like I’d just be letting other people down if I went back.”

Torres says that she now knows that eating disorders aren’t worth the work that they take.

“But now, this far away from it, the effort that you would have to put in to eat that little, work out that much, hate yourself that much, I don’t have it in me,” Torres said. “There are way too many other things in life to focus on, like school, and friends, and being happy.”