Pelfrey wins YALSA award for best literature program for teens, only one in nation 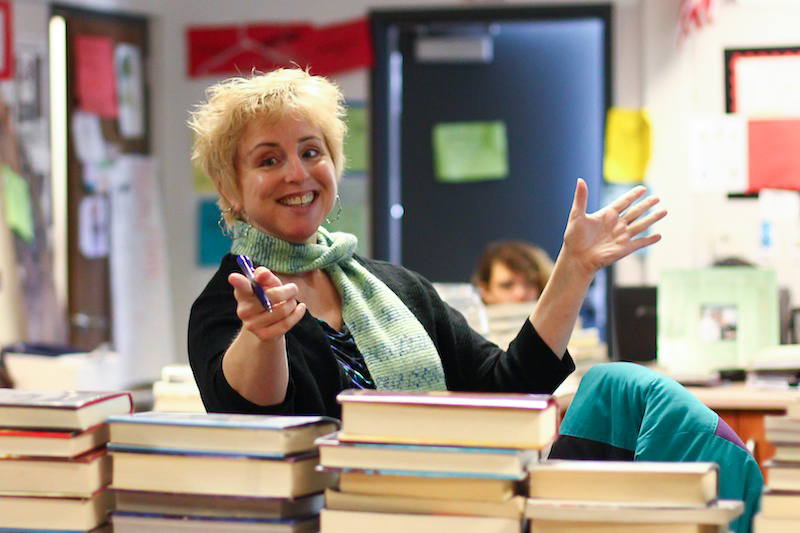 While the sophomores, juniors and seniors were at Magic Mountain celebrating their test scores on Goliath and X3 earlier this year, freshmen were relearning the importance of reading and literacy when the Teen Literacy Project, also known as the “Angel Potato Revolution,” was launched.

“I am BT, and BT equals ‘beyond thrilled,” said Pelfrey of her achievement.

The project began earlier this year when Pelfrey wanted to encourage their students to to “unplug” and read. Pelfrey then worked with Education in the Digital Age teacher Conni Carr to create “The Angel Potato Revolution,” a project that requires EDA students read three to five books from the YALSA Top 100 Best Fiction for Young Adults list to read for pleasure and then participate in activities relating to the books, such as writing reviews and blog posts about them.

“We were trying to get students to unplug from technology, which is funny since we are their EDA teachers,” said Carr.

Some students also realized the irony of EDA teachers encouraging their students to “unplug.”

Since the launch date, students have worked with published authors A. S. King and Andrew Smith, who stressed the importance of reading. The students we able to ask these writers questions and also blog and review books with them.

“Having the support from the authors was amazing and unavailable,” said Pelfrey.

The authors were also available over Skype on the launch date, which was important since the launch set the tone for the rest of the project. That day, freshmen were rotated through four different stations, each of which stressed the importance of reading.

“We tried to make [the activities] active and interactive,” said Carr.

Freshman Ben Stogsdell had positive things to say about the event.

Since the launch, Pelfrey has received books on the YALSA list and has made them available for all of her students to read. The project is being funded by grants from YALSA and the NEP organization.

“I can find a book for anybody; I know books,” said Pelfrey.

Principal Joe Bova told Carr that the program was sure to stick around, every October, whether or not the upperclassmen go to Magic Mountain.

Freshman Daniel Perez feels like the project has been worthwhile.

“I personally think it’s really cool, since I’ve been reading books all my life,” he said.