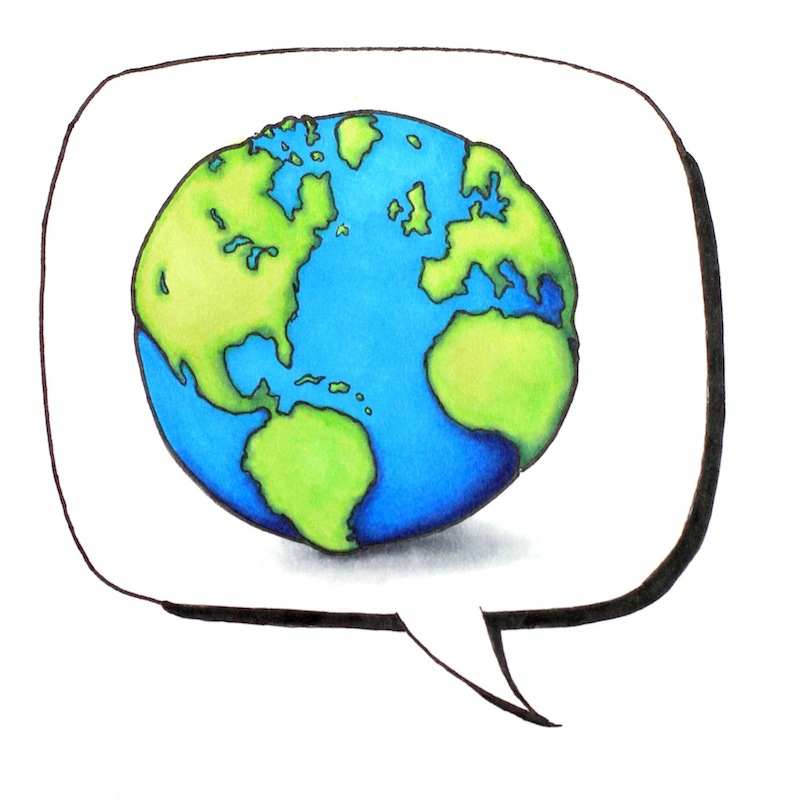 Right now, I am talking to you in your native language, your first language. Often times, a person’s first language is referred to as their “heart language.” It is a part of you; it always has and always will be, no matter what. So, what if my heart language was different? Let’s say it was Mandarin, or French, or Swahili. Would I be giving this speech to you right now? No. Seriously. I would barely be able to communicate with you, and even if I could, it would be in the most primitive form like weird hand motions and sounds.

Imagine what humanity could accomplish if the world could communicate without the barrier of language. Imagine what would happen if a middle class American could pick up a phone and call a South African. Imagine all the people coming together as one. Imagine, two soldiers on the front lines of World War One, talking with each other and coming to know each other’s customs rather than shooting each other on sight because they could not beg the other for mercy, because they could not communicate.

What I would like the whole world to do is learn a single language, so that everyone can speak the same language. How absurd does that sound? Asking all 7 billion people of planet Earth to learn the same language. That’s impossible and on top of that, it’s culturally destructive.

You see, a person’s language isn’t just how they communicate; it’s how they live. A language can define a culture beyond the typical stereotypes. Without the French language, who would the French be? Really good American bakers with bad hygiene? Who would Russians be without their Russian language? British people with very pale skin and a high appreciation for vodka? A language defines your culture. It draws a very distinct line between one society and the other. It’s not like we can just destroy hundreds of languages and cultures because I think there’s a unique beauty in them which then creates a beauty in us, a beauty in humanity.

So how can we destroy this beautiful barrier? We weaken it. We adapt to it. We join it. We learn a new language. We join the ranks of our foreign brothers and educate ourselves for the better of humanity, for the better of us as individuals. If we taught ourselves the languages of our allies, we could act with tremendous force and brute destructiveness against any armies that stood in the way of us. If we learned the languages of our enemies, we could act with tremendous grace and compassion, bringing peace to places that would’ve never experienced stable, political tranquility.

Even right here in California, with our very dense Latino population, we could be working miracles if we were all fluent in Spanish. We could help the poor, and cooperate with eachother ten times more efficiently, creating a community that is safer and better than ever before. Learn a new language, not only for others, but for yourself as well. Learning a new language isn’t something that is beneficial to one side, but it benefits everyone.

Those people you just saw were stoked for a couple reasons: they had pride in the fact that they could speak multiple languages. They were happy, because they could talk with their grandmas, and grandpas. Their confidence has been built up as their knowledge built with them. Learn a new language.

You have no excuse not to, other than stereotypical American laziness. There are hundreds of ways to learn a language. Here at Foothill we have an excellent Spanish course that is free. It even offers programs that study abroad. However, according to trending statistics, one-third of the sophmore class will not learn a language next year. Rosetta Stone has taught over 3 million people a new language just this past year. We already have the resources. We already have the ability. It is up to us to take action. We can’t blow off our extra time playing senseless video games, and spending hours a night looking at Instagram and Facebook. If we do this we benefit humanity. We benefit everyone. We benefit the world.