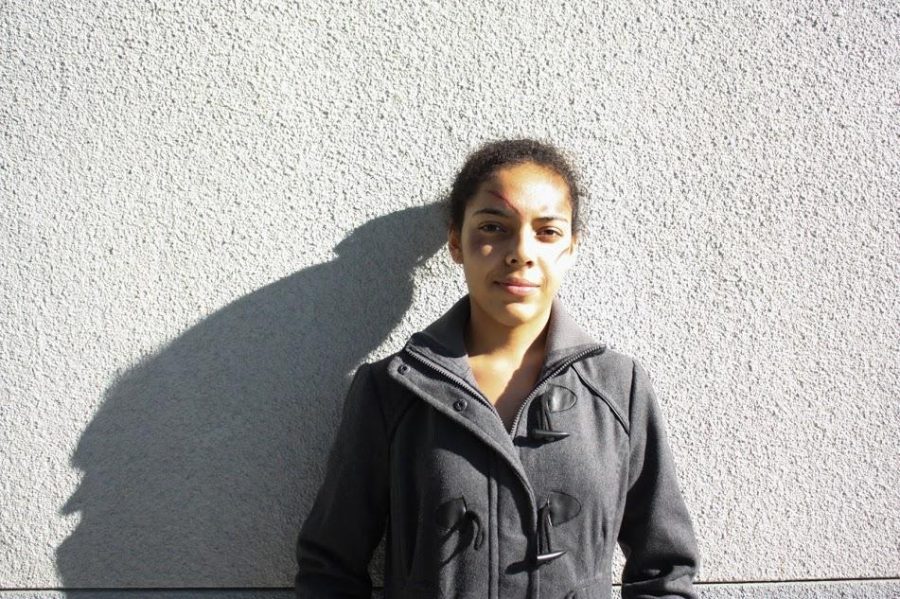 The atmosphere was heavy Monday morning as juniors and seniors gathered at the entrance of Foothill’s campus to watch the unfolding of Every 15 Minutes’ car crash scene. One of the students standing under the spotlight was junior Rhiannon Tircuit, the drunk driver.

The atmosphere was heavy Monday morning as juniors and seniors gathered at the entrance of Foothill’s campus to watch the unfolding of Every 15 Minutes’ car crash scene. One of the students standing under the spotlight was junior Rhiannon Tircuit, the drunk driver.

Even before knowing about the major role she would be assigned to play in the program, Tircuit was excited to participate in Every 15 Minutes and experience the event firsthand.

Some aspects of the simulation that stood out to her most prominently were the emotions dealt with from the aftermath of the car crash. Tircuit is not one to become emotional easily, but her heart ached at the sight of junior Kevin Waechter, the student participating as a severely injured victim, and his mother at the hospital.

“When Kevin was in the hospital and his mom was crying, it just really showed how much a son or daughter really means to their parents. It kind of hit me at that [moment],” she said.

At the scene of the car crash, Tircuit was taken to the side of the road as those who sustained major and minor injuries were placed in the ambulance and rushed to the hospital. An officer then performed field sobriety tests on Tircuit. She was asked a series of questions, as well as walked in a straight line and underwent a horizontal gaze nystagmus test, before Tircuit was given a breathalyzer test. After concluding that her blood-alcohol concentration was above the legal limit, the officer arrested her.

After being taken off of Foothill’s campus, Tircuit faced a mock trial in which the judge found her guilty and sentenced her to seven years at Ventura Youth Correctional Facility. The scene was pre-recorded before the Every 15 Minutes event.

According to event coordinator and senior Cody Clark, Tircuit did an amazing job portraying the drunk driver.

“What I really liked about her was that she was very open to inputs from other people. If other people had ideas on how she could better portray the drunk driver, she [would take] that and she work with it. She wasn’t closed-minded. She was very open-minded and willing to just do anything we needed her to do,” he said.

“Just to be able to get up there and do that in front of the entire school is crazy. […] I’m very proud of her,” Clark continued.

Senior Charlie Klucker had a similar view of Tircuit’s portrayal, saying that it was really interesting to watch her act out the role of the drunk driver as Tircuit is not one who would put herself in an under the influence driving situation.

“She’s not a partying type or anything like that, so it just added an air of ‘there’s something wrong with the picture’ to it. But she did great,” Klucker said.

Klucker had some personal ties to the event overall, as her father was a California Highway Patrol officer for 30 years and has been a victim of a car crash in the past. Although her father is well and the accident luckily only left him with “a gnarly scar,” Klucker understands what it feels like to be in such situations where you’re “not the one making the bad decisions.”

Tircuit believes that the simulation was effective in raising awareness about distracted driving and driving under the influence due to the event’s immersion.

Although Tircuit has not suffered from a loss due to under the influence driving, her stepmother was involved in a car crash due to distracted driving.

“My step mom was in a car accident because a college student was texting and driving, and he T-boned her. But she got out fine. She only had a few bruises, so that was good,” she said.

Although Tircuit hasn’t officially started driving, the simulation has taught her to be more cautious for when she does get behind the wheel. She also better understands the gravity and impacts of distracted and under the influence driving.

“There are more important things than your own little guilty pleasures, like other people’s lives. It’s not just about you; it’s about everyone,” she said.