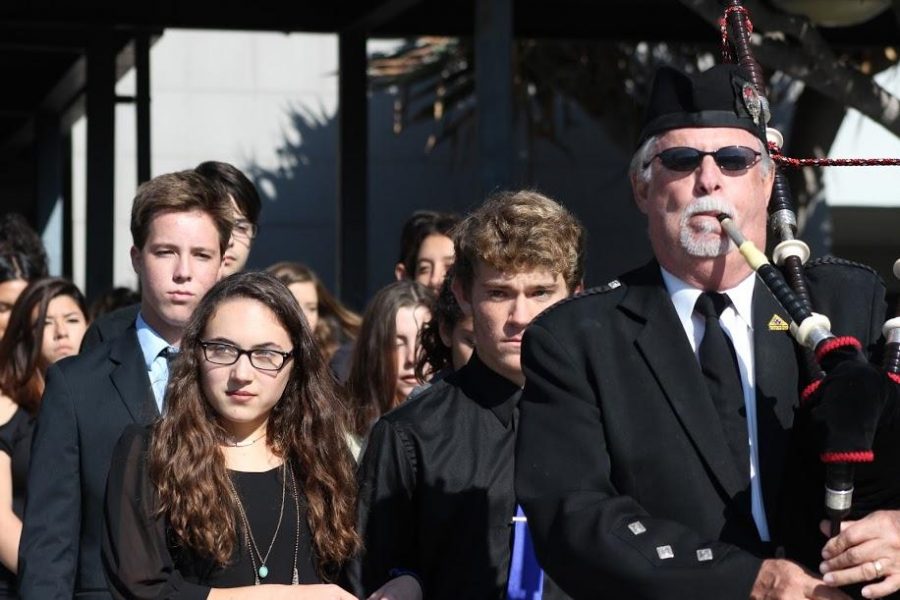 The seventeen “living dead” students, as well as the four actors from the simulation, entered wearing black clothing in a procession led by bagpipes. Principal Joe Bova introduced and opened the ceremony to guest speakers.

Senior Asia Moore gave the first speech, a eulogy for her friend Lauren Dalmatoff, who had died on impact in the simulation.

“In the very beginning actually, it [the eulogy] was actually written all in present tense, because it’s kind of weird to write in past tense about a friend you just saw yesterday,” Moore said.

Sharon Waechter gave a eulogy for her son Kevin, who had died at the hospital, according to the simulation.

“Kevin touched all of our hearts. I stand here today with a shattered heart. The loss of a child is something that nobody prepares you for. It is a tremendous and irreversible tragedy,” Sharon Waechter said. “Kevin had dreams and plans for the future: graduation, college, lifeguarding, sports, and a life filled to the brim.”

“I have nothing to celebrate today,” Meyer said. “How can I, as his mother, celebrate a life he did not get to live?”

Juniors and seniors also watched a video prepared of yesterday’s crash by CAPS Media Team. The video also included scenes by the student actors that were filmed in the weeks leading up to the simulation.

The footage showed junior Kevin Waechter taken to Ventura County Medical Center (VCMC) and Sharon Waechter crying over her son as medical personnel worked on him. It also showed junior Rhiannon Tircuit getting a blood test at VCMC and being booked in jail, as well as the police telling Shannon Colitti, the mother of Lauren Dalmatoff, that her daughter had been killed.

In the simulation footage, Sharon Waechter and Shannon Colitti gave impact statements in the courtroom. Tircuit’s mother asked for “fair and just punishment” for her daughter.

Tircuit was charged with seven years in a California Department of Corrections for vehicular manslaughter, driving under the influence and bodily harm caused to others.

Pedeferri was paralyzed from “basically the armpit down” when he was hit by a 20-year-old driver under the influence of marijuana at a traffic stop.

Pedeferri described the impacts that the incident has had on his life.

“Even when you don’t die, sometimes you wish you did,” Pedeferri said. Since the accident, Pedeferri has gone on to represent the United States on the Paralympic Team at the 2012 London Games.

Pedeferri, as well as others, became emotional when he talked about how he’d never get the opportunity to dance with his daughter, after which he ended his speech.

This year’s Every 15 Minutes was dedicated to Chris Prewitt and Nick Haverland. Chris Prewitt was killed by an impaired driver on April 6, 2014 while he was jogging. Prewitt taught at Foothill, forging bonds with many students and teachers, and had been serving as the Vice Principal at DeAnza Middle School (DATA).

Nick Haverland graduated from Foothill in 2009 and was killed on May 11, 2011 by an impaired driver. Foothill Principal Joe Bova read a piece of writing by senior Riley Knouse, who knew him. Nick Haverland’s parents were present at the funeral.

“It was heartbreaking to see a drunk driving death reenacted because we lived that with our son Nick,” Nick Haverland’s mother, Susan Haverland, said. She, echoing the sentiments of many others, said she wanted to encourage students not to drink and drive.

Each guest shared speeches with the audience. Click the circles to hear their thoughts on impaired driving: 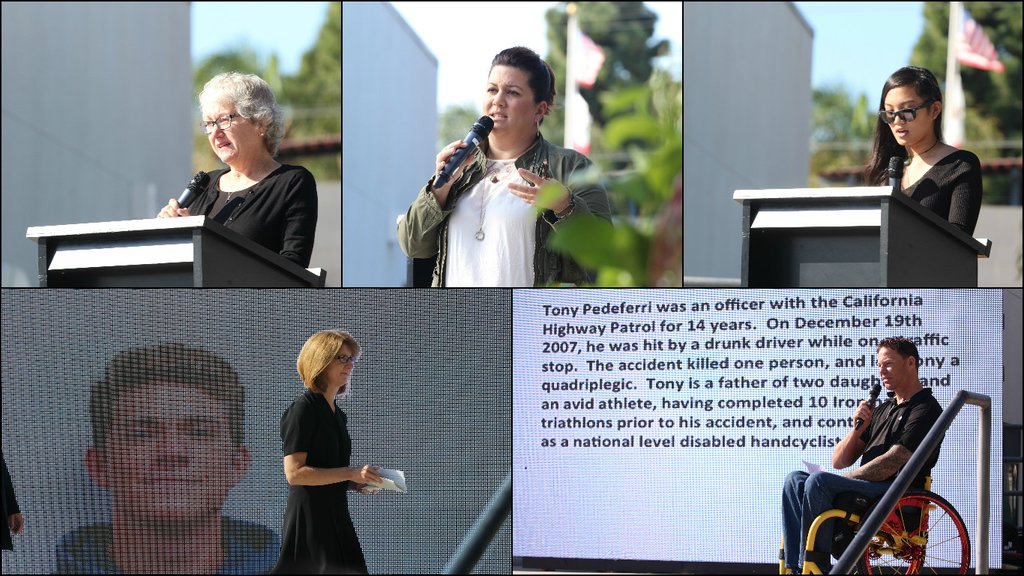 “Driving under the influence of anything is simply irresponsible. You put people at risk. It’s never worth the consequences. And it’s fundamentally the wrong thing to do.”

Erin Prewitt, wife of the late Chris Prewitt, gave a speech about finding your life’s purpose.

Erin Prewitt said that Chris “embraced life with a big smile” and encouraged those present towards “jumping in and living life to the fullest.”

Senior Casey O’Neill said that Erin Prewitt’s speech made her thankful to be alive.

“It made me feel very thankful and blessed to be able to wake up, because I drive to school every morning and I take that risk every morning of someone killing me in a car crash and so I feel very blessed,” O’Neill said.

At the end of the funeral, students were encouraged to sign the pledges by their seats. These included Casey’s Pledge and Oprah’s No Phone Zone Pledge. Both are pledges intended to end distracted and impaired driving.

Many students felt immensely impacted by the funeral.

“It was real when I saw the crash, but it became more real when it became the funeral. It hit more when the parents were reading their eulogies for their kids, it hit harder when I saw my friends, the living dead walk to sit in their seats,” junior Allison Shields said. “It was hard for me because these are my friends and I don’t want that to happen to them.”

“I was thinking about my best friend, her name’s Melissa, like what if she died […] I was just thinking that if I lost her then I’d probably lose myself as well.”

Junior Courtney Corbett felt that the guest speakers and parents added a layer of emotion and reality to Every 15 Minutes.

“And sitting through the eulogies for Lauren and Kevin- you could still see them sit there yet everyone was tearing up because the whole experience we’ve been through in the past day and a half made it feel like we could have actually been at their funeral.”

For students that knew the car crash victims of the simulation, like junior Olivia Cate, the funeral was “insane” and “scary.”

“I’m not super close with them, but I know them, and I think if they were gone that would just kill me,” Cate said. “I was tearing up and then when they brought up Chris Prewitt, my heart was breaking.”

Some opinions shifted as the simulation progressed. Junior Ethan Ambler felt that the second day made more of an impact on him than the first.

“My own father was wheelchair-bound and he did wheelchair sports for a time before he [got] up and back on his feet. But it really got to me and it was really heavy to see everything and hear everyone talking about everything,” he said.

“I think a lot of the time their initial reaction, especially with the freshmen, is to sort of be like funny or goofy about it, mostly […] because they, I think, didn’t know how to react,” Guzik said.

“I expected this morning to see a lot of of my juniors and seniors a little bit more impacted.”

Others saw the first day pale in comparison to the funeral service and memorial, such as senior Matt De Santi, who felt that the crash simulation was ineffective.

“I can respect the intention [of E15M] but personally, I think the whole thing would be a lot better if they got rid of all the acting stuff and they just focused on the real people perspective, like when they did the tribute to the kid who went here that died and Chris Prewitt,” he said.

“That was the thing I think people care about and that’s what hits people the hardest and that’s a more powerful, thoughtful message I think than doing the whole [acting] thing.”

Although some students and teachers had differing opinions on the effectiveness on the program, most agreed on one single message.

“For me to stand here and say ‘Don’t ever drink,’ I think is pretty unrealistic, but recognize you can’t make good decisions. You can’t. It’s impossible. I don’t care how old you are or whether it’s legal for you to be drinking or not. You know you’ve been drinking. Walk home, call someone, take a cab, I don’t care if you don’t eat for the rest of the week because you had to pay for that cab. But do it, stay alive.”