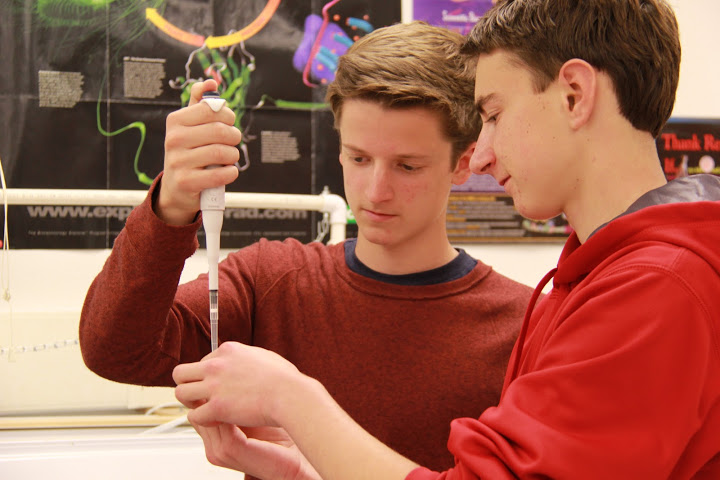 Students of all grades and experience levels collected fish samples from grocery stores and sushi restaurants in order to use DNA Barcoding to identify whether stores are actually selling consumers the type of fish they think they are purchasing.

The entire process, hosted by Bioscience Academy Chair Darcy Duffy began with an orientation meeting last Monday, and spanned a total of one week and four days, ended with analysis of the results on Friday the 18th.
In the program, students had the opportunity to conduct an investigation into consumer products, and received three hours of lectures specific to DNA Barcoding, coupled with over three hours of hands-on lab work.
Sophia Horigan, a senior, enrolled at Foothill as a junior and never had the opportunity to join the Bioscience Academy, but was fascinated by the investigation.
“The opportunity this presented seemed very unique,“ Horigan said.
Kalin Moore, a junior, also felt that participating in this extracurricular was a valuable experience.
“I’m not in Bioscience, but it [DNA Barcoding fish] gave me an opportunity to do what Bioscience does,” Moore said.
Though most students who participated are not in Bioscience, some students from the Biotech class at Foothill decided to help mentor the participants through the lab.
Senior Senin Ranasinghe, one of the mentors for the lab, was inspired to help the participants learn by his experiences as a FIRE Leader. He also wants to make his mark on Foothill and the Bioscience Academy and feels that mentoring would help.
“I was a FIRE Leader and I was fulfilled by how I gave freshmen an insight into their years to come,” Ranasinghe said.
Not only did students use this program to satisfy their curiosity, but also as a means to prepare for the more advanced science classes at Foothill such as Biotech, where lab work is an integral aspect of the class.
“I’ve always been interested in Science and I thought it [the investigation] would be would be a good opportunity to prepare for Biotech,” said junior Claire Jurgensen, who interested in Biotech.
“They’ll [participants] gain a good experience of what a Biotech lab looks like,” Ranasinghe said.
Duffy felt the program was a great learning experience and great preparation for future classes, no matter the participants’ grade level.
“Our older students who had biology and chemistry were able to really learn some of the finer points of those concepts and how we can apply them in the lab in barcoding, and I think some of our younger students, in addition our older students, were all able to see the lab techniques and get acquainted with them,” Duffy said.
Unfortunately, despite students’ hard work, most of the experiments failed and the DNA was not able to analyzed. However, Duffy has offered to attempt the lab again on Thursday, January 24 and Friday, January 25.
“Students who are available will be doing the samples again, we will probably have smaller groups because it will be after finals, so that will be one thing that helps, and then I’m going to run some of the samples myself as a control,” said Duffy.