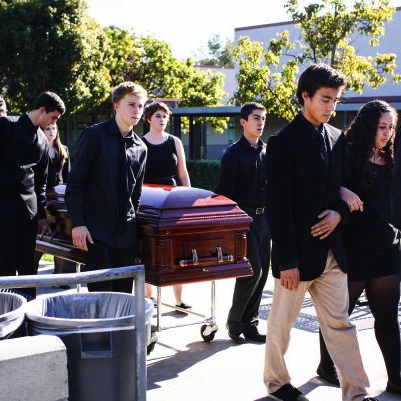 The service began with junior Paige Schouten and senior Annabelle Warren reading aloud letters they had written to their friends, Camarillo and Vaughan, who were both “killed” in yesterday’s crash simulation.

The emotions felt very real, though the crash was a simulation and the two caskets were empty.

“It was very emotional to me because she’s my close friend,” Schouten said. “When we saw the caskets, it was surreal. I was crying.”

Warren’s voice trembled with sadness as she spoke on behalf of her friend Vaughan, who “died” in the hospital yesterday after the simulated crash. She described her friend as “hilarious, beyond beautiful, and brilliant” and remembered her love for winter and the snow.

“Now your angel face matches the angel snow, so let our tears fall like snowflakes,” she said.

Mike Takeda followed them; he read the letter he had written to his son, junior Austin Takeda, who was the drunk driver that caused the accident and was sentenced to 15 years in prison during the simulation.

“I would never want to be the parent of the child who causes this kind of pain,” his mother Rosemary Takeda said. “I wouldn’t want to face the other parents.”

Patty Braga was emotional and tearful as she spoke in remembrance of her daughter, junior Carly Camarillo, who “died” at the scene of the crash simulation yesterday.

“You are my joy. And I will miss you, every part of you, every inch of you, if you were ever to leave this earth before me,” Braga said.

The next speaker was Officer Tony Pedeferri, a Ventura highway patrol who was hit by a drunk driver in 2007 while he was standing next to a car he had pulled over. The accident killed one person and left Pedeferri a quadriplegic. He spoke about his traumatic accident and his mission to educate people on the dangers of driving under the influence.

Pedeferri was followed by the showing of the Every 15 Minutes video, which showed the aftermath of the crash scene from Thursday.

As the service came to a close, students were asked to take Casey’s Pledge against drunk driving and Oprah’s No Phone Zone Pledge. Most students took both pledges, promising to never drive while distracted or under the influence.

John Silva’s son, junior Blake Silva, was one of the “living dead” students.

“Because he wasn’t in the crash, for me, writing the letter as if he was gone…that was hard,” he said. “But I guess that also makes it the best part, for this purpose. It made me more aware of things I already knew, like how much I love him.”

In her speech about Vaughan, Warren expressed an important message of the program: that the dangers of driving under the influence or while distracted is a lesson that should be learned in a simulation, rather than in real life, where the “dead” will not return after 24 hours.

“I must remind you not to make the mistake of justifying her death. I want to tell you that we will take the important lesson from her passing about the dangers of driving under the influence, but I know that this would be wrong, because Marnie did not want to be at the expense of a life lesson,” Warren said.