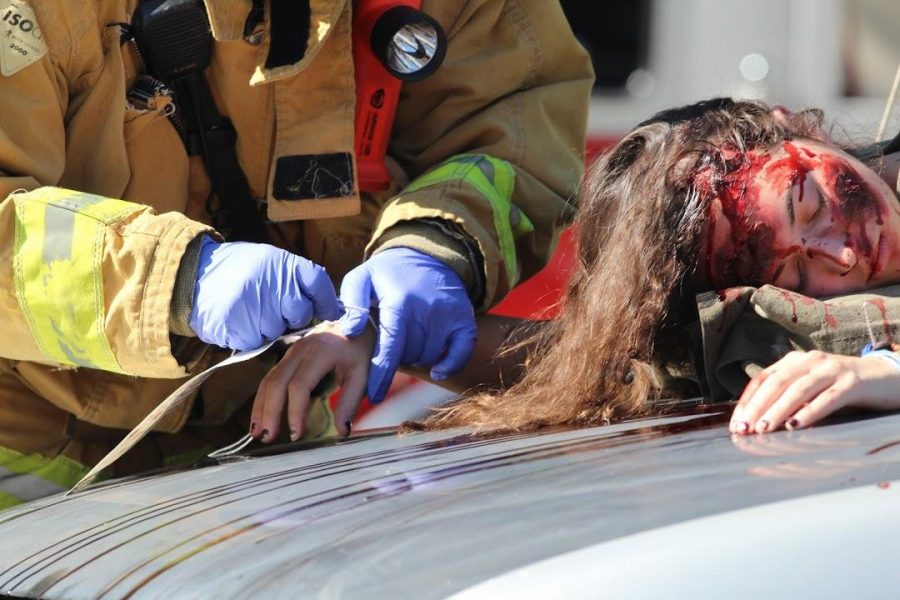 At 8 a.m. on Monday, an announcement rang throughout the campus reporting the deaths of seniors Nicole Rockholt and Belen Brashears. After that first announcement, two more students were pronounced dead every 15 minutes for the rest of the school day.

At 8 a.m. on Monday, an announcement rang throughout the campus reporting the deaths of seniors Nicole Rockholt and Belen Brashears. After that first announcement, two more students were pronounced dead every 15 minutes for the rest of the school day.

Today marks the first day of the two-day distracted driving simulation that Foothill stages with the help of the Ventura community and a California Office of Traffic Safety grant. The event is based on the statistic that someone in the United States dies because of an alcohol-related traffic accident every 15 minutes.

“[Every 15 Minutes] is just a great reminder, an emotional reminder to students. It’s hard to get students’ attentions about things but when you […] put it right in front of their face and they hear their own fellow students’ names and they get to see this reenactment happen I think it’s much more impactful,” Foothill Principal Joe Bova said.

About 650 students, parents, and guests poured into seats at the front of the school at 10:48 a.m. to witness the simulation, in which no students were actually harmed.

Four students were involved in the crash simulation, which was staged in the roundabout in front of Foothill. Seventeen members of the “living dead,” students who were proclaimed dead throughout the simulation, wore corpse-like makeup as they watched the scene from the opposite side of the crash.

Junior Rhiannon Tircuit played the role of a drunk driver along with her passenger, junior Kevin Waechter, who died in the hospital after the crash.

Tircuit’s car was in a collision with the car driven by senior Michael Vaughan, who sustained minor injuries, and his passenger, senior Lauren Dalmatoff, who was ejected from the vehicle and killed on impact.

“Before, I was nervous and there were a lot of superficial things we were thinking about, like the hood of the car is hot or there’s still glass in the car, things like that,” Dalmatoff said.

“And then it was happening and I was under the [tarp] and I could hear Kevin in pain and it definitely felt very real and when they drove me away and I came out it was like, “Did that just happen? Where am I?’ [because] I couldn’t see.”

After completing a breathalyzer test and attempting to walk in a straight line, drunk driver Tircuit was arrested. After several minutes of removing the top and door from the car to safely extricate Waechter’s body, he was driven by ambulance to Ventura County Medical Center (VCMC). Shortly after, a medical examiner analyzed Dalmatoff’s body and drove her away.

“I felt like I was definitely going to be dead at that point,” Waechter said.

Waechter died in the hospital after “30 minutes” of medical attention according to the simulation, though only 21 minutes had actually passed. He had received chest compressions and multiple doses of cardiac stimulant epinephrine, followed by automated external defibrillator (AED) shocks.

After medical personnel detected no blood pressure or cardiac movement, he was pronounced dead at 11:31 a.m.

“Once we were in the ambulance, and then came here [to the hospital] I felt scared just for what’s going to happen and how my family’s going to react to it,” Waechter said. “And then after that I felt like… I felt dead I guess, I don’t know how to explain it. It’s definitely going to change the choices I’ll be making later in life, college, the rest of my life.”

Throughout the day, California Highway Patrol (CHP) officer Rolando Tejada walked into the classrooms of the “living dead” students as the announcement came on and read a short eulogy to the classroom and put a rose on their desk.

“My role is to go from classroom to classroom, read obituaries and let the students know how they passed away,” Tejada said.

“I’ve definitely seen students… they become quiet, they’re focused, you can tell they’re thinking about the whole incident. Along with me, I look at the students, I see how they’re impacted by it, by what I say.”

Senior Renee Steiminger was one of those affected students.

“It was really sad to see the roses on people’s desks and to hear what the offices were reading about them and it’s like that’s a life that had so much potential and to have it wasted on a drunk driving accident is really sad,” Steiminger said.

“It is definitely impacting and I’m not really an emotional person but I think this definitely hit the target,” she said.

The student body watched a prepared video of Foothill students at a party, deciding to get in the car drunk and making the subsequent 911 phone call after a crash. The video was prepared by CAPS Media Center.

As juniors and seniors watched the simulation outside, freshmen and sophomores stayed in their classroom to watch an informational video about the perils of drunk driving.

“The video gave four scenarios and it talked about how people’s lives were drastically changed after these accidents,” Tan said. “It was definitely pretty sad because these people’s lives were just like ours but they’ve changed so much over just a couple seconds.”

Senior and “living dead” participant Nicole Rockholt was very affected by the simulation.

“What scares me is that we’ve worked so hard to get up to this point in our senior year, and then to have it cut off like that, it’s tragic and to know that you’ll never be able to go on with the life you’ve wanted, it’s just really sad,” Rockholt said.

“I’ve actually had family members that have been affected with narcotics and drug usage, so to me I just want to be able to do anything I can to raise awareness and the dangers of this usage in society,” she said. “One of my aunts died in a car accident. I didn’t really know her well, but to see this with my classmates, it is emotional.”

“My dad was in a drunk driving accident when he was a teenager and the car flipped and I don’t think anybody died, but there was severe injuries and he told me that it was one of the most traumatic experiences of his life,” Oliver said.

“Some of his friends who he was sitting with having a good time were all of a sudden in a serious critical life or death situation and it didn’t seem real to him before that so it related to me in that way.”

Senior Kailey Schuyler’s mother got into an accident with a man driving under the influence of drugs last year.

“No one was injured, but our car got totaled because there was a man who was on drugs and he went straight through the red light and then he smashed into my mom’s car – I mean everyone was okay but it was definitely scary for me, especially since I was home alone and they didn’t come home for a while and I was left to wonder what happened.”

Jeff Magbitang, a paramedic with American Medical Response (AMR), said that his goal was to show students the reality and consequences of their choices.

“While this is a simulation, we see people like this on a daily basis and they have consequences to deal with. So if we can prevent another fatal consequence from happening, that would be great,” Magbitang said.

“This is not something that happens to me every day, but these calls do happen every day. People get maimed, people die and a lot of times it is preventable.”

During the simulation, students also got to see the full procedure that the police officers, firefighters and medical professionals take in the case of a drunk driving accident.

“I think I learned about the hard work that goes into the rescue team and the people who take their time and money and all the resources that it takes to help an accident and help the people who they’re trying to save. It just makes the girl who is drunk driving or man very stupid-looking to cause that harm to innocent people,” senior Leah Kopp said.

The effort into planning and organizing the event itself took “a lot [of time],” according to event coordinator and senior Cody Clark.

“We started back in May with our first planning meeting so it really does take almost a whole year to plan and there’s so many things that go into it,” Clark said.

Fellow coordinator and senior Emily Marostica added that “it probably took a crew of about a 100-120 people to get this done.”

Kopp felt that Every 15 Minutes provided a “quiet solitude” in which students could watch the simulation and reflect on the drastic effects of drunk driving.

Many students felt that the simulation had a positive impact on their awareness of drunk driving.

“I think I can learn to take more precautions if I want to drink ever, to really think about having a designated driver and how much each of us should really drink because even if you’re not driving, it can really affect anything in the car,” senior Bailey Rowland said.

Junior Jessica Rocha felt that Every 15 Minutes helped students realize the reality of how a drunk driving accident can occur to anyone – even students at Foothill.

“I think something we could all gain is how closely it can affect us. Everyone is seeing it and everyone is thinking ‘Oh, it’s just a simulation,’ but it really could just happen to anyone and we don’t think about that,” Rocha said.

Sharon Waechter, mother of Kevin Waechter, was present when her son was pronounced dead. She said the experience hit her hard.

“It’s a powerful thing as a parent to have to sit and write impact statements; we had to write a eulogy; it’s really powerful [because] you sit and think about how fragile life is.”