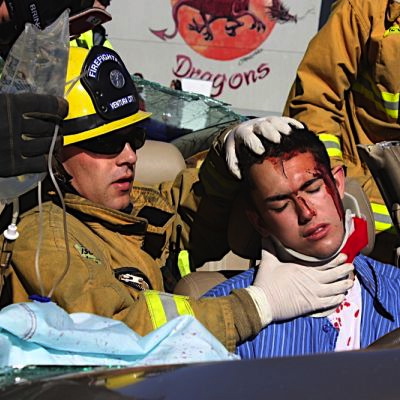 Every 15 minutes someone dies as a result of an alcohol-related collision. This Thursday and Friday, Foothill students will actually experience the detriments of driving while under the influence during a two-day-long program and simulation.

Throughout high schools nationally, school districts partner with local police officers, highway patrol and hospitals and carry out a staged car crash using real high school students as actors through a program called “Every 15 Minutes.” The CHP funds Foothill’s program through a grant to raise awareness of the effects of irresponsible driving.

ASB teacher Darcy Duffy, injury prevention coordinator at Ventra County Medical Center (VCMC) Elana Gutierrez, and a parent volunteer have been working together to put on “Every 15 Minutes” at Foothill.

“It’s a lot of work for something that I don’t ever want to know the result of,” ASB advisor Darcy Duffy said.

The event happens every other year, so that the staged crash will seem just as real as the first time students saw it.

On the first day of the event, students are “killed” every 15 minutes. These students are dressed as the “living dead” to represent the mass amount of students who are killed each year in collisions with drunk drivers.

This year, the Grim Reaper will not be taking students out of class during the program like it had two years ago.

“The Grim Reaper seemed to take away from the program, but there are more of the “living dead” than last year,” film crew video production support senior Jackson Tovar said.

Later that day, a staged car crash will bring the fire department, an ambulance, and police services to assist. The rest of that day is carried out like a normal car crash, where students are given medical attention and put under arrest.

During the second day of the event, students will reflect on the accident and the product that results.

“Anytime students get involved, it builds a positive culture [at school]. It’s an opportunity to help connect students to school,” said Duffy.