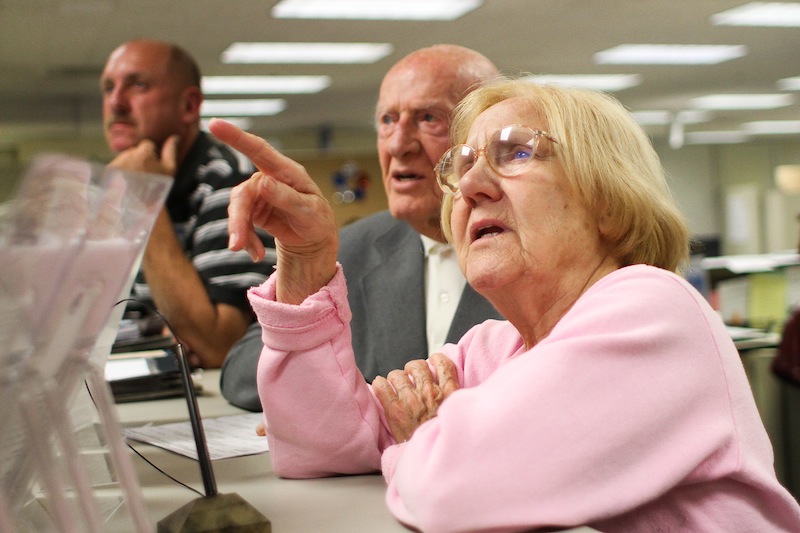 Now that the remaining votes have been counted, the numbers show that Proposition 30 has passed. Measure Q looks as though it will pass, but the close numbers mean that uncounted absentee ballots could sway the result. The close congressional race has ended with a win for Democrat Julia Brownley, who had a slight lead over Republican Tony Strickland. Incumbent Barack Obama has cinched the presidency once again, earning 303 electoral votes out of a possible 538.

Anticipation crowded the air of Ventura’s polling locations on Election Day as the ballots were both distributed and accepted as mail-ins. The three polling stations in the Ventura County Government Center were kept busy throughout the day until the doors closed at 8 p.m.

Volunteer Sandy Stanley was surprised to see the amount of people who came to vote this year. Stanley reflected that this was the most people, it seemed to her, that they have had.

After the voting process was finished and the public trickled out, the actual election process began. Politicians from the county and state came to observe the status of the election.

Jackson stressed the importance of voting in the election.

“I’m excited to get out there and vote… and I think it is important that people do vote,” said Jackson.

A crowd gathered around the television screen to see the current results.

According to major news outlets such as the Los Angeles Times and the Sacremento Bee, Proposition 30, has passed with 54 percent of the vote. The proposition needed 50 percent to pass. The Dragon Press is waiting for official confirmation.

Measure Q looks as though it will pass. The polls showed that 67.13 percent of Ventura residents voting in favor of the parcel tax, according to results released by the Ventura County Elections Office at 2:11 a.m. The measure needs at least 66.7 percent of the vote to pass, which means there are enough uncounted absentee ballots to potentially change the projected outcome. {sidebar id=62}

The congressional race for the newly formed 26th district, which now represents Ventura County, has been close for most of the night. The final results, however, show that Democrat Julia Brownley secured 51.85 percent of the vote while Republican Tony Strickland received 48.15 percent.

The news of Ohio’s Democratic vote pleased some of the observers.

When the news of Ohio’s polls came in the county office, many people were relieved and excited. The result of the state led most to believe the election was already decided.

“I wasn’t going to get up tomorrow if [Obama] hadn’t won,” said Empol.

Foothill junior Carson Graves watched the results of the election at his house and is upset by Obama’s victory.

“I am in shock,” he said. “I knew it was going to be a razor-thin election, but I never could have expected this. Considering the nation is in the midst of the worst recession since the Great Depression and we have hardly any tangible evidence that Obama’s policies have helped dig us out of this massive hole we have been in for the past couple years, I am worried not only for my personal future, but for the nation’s future,” he said.

Foothill junior Sedona Powell, on the other hand, is happy with the presidential election results.

“I am relieved. We are on the path to create a better and more equal nation. The opportunity to succeed in the pursuit of happiness will proceed to be in reach of all,” she said.

Editor’s note: This article was updated at 6:26 a.m. on November 7 to reflect the final numbers for the election. Assistant editor-in-chief Allison Clark contributed to the reporting of this article.