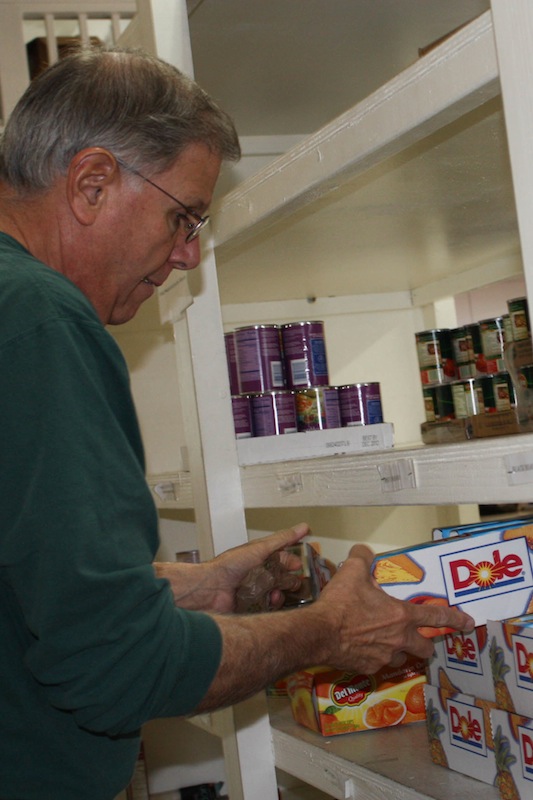 A meager amount of canned foods and non-perishable goods sit on almost empty shelves at the Food Pantry at Project Understanding, waiting to be distributed to Ventura homeless.

The volunteer organization passes out food to the homeless three days a week from 9 a.m. to noon.
The Food Pantry acquires its food from either FOOD Share or direct donations. Recently, a lack of donations from individual participants and group organizations has decreased the Pantry’s food supply. Consequently, the Food Pantry must use its money to purchase food from FOOD Share instead of putting it into its other beneficial programs, such as its nine tutoring centers.
“All for free, you know, all the kids that can’t afford the expensive tutoring centers. To know you have some free help, that would be huge,” volunteer Susan Kolbeck said.
Janine Dykstra, coordinator of the Food Pantry, has noted the small food stock.
“There’s a shortage of food and an increase in clients. About 900 to 1100 people come that depend on our food to get through their week, or month, or whatever their gap is,” she said.
The food given helps a wide variety of Ventura homeless: old, young, large families, single mothers, mentally handicapped, and people recovering from addictions.
The food they give out is usually enough to sustain them for a few days, sometimes even a few weeks.
“That’s big when you’re hungry,” Kolbeck said.
Volunteer Frank Maggio understands how vital it is for Food Pantry to have enough food to provide for the homeless community. People have to pay for gasoline, rent, and food; however, most people usually spend less money on food in order to survive, he said.
“We’re in a position here at Project Understanding, especially with the Food Pantry and some of our other services, to fill that gap,” Maggio said.
Dykstra believes the shortage can be solved if people are informed about their facility, the people they serve, and on ways to help out.
“People can be educated on who we serve. We don’t just serve the homeless drunk guy on the corner. I think people just don’t understand what homeless looks like anymore,” she said.
The conventional idea about what defines a person as homeless has shifted. Now families, as well as single mothers, are included in the homeless category. And it is families that are the main recipients of the food at the Food Pantry.
If donations continue to be minimal, the Food Pantry will not be able to hand out as much food to the families. The families will then sustain themselves with unhealthy foods, because they are inexpensive and easier on their wallets.
“Healthy foods are so expensive and crappy foods are so cheap; it’s easier for them to buy their kid a box of Ding-Dongs than a box of crackers or something more healthy,” Dykstra said.
Nutrition is important at the Food Pantry. They want to pass out healthy foods to the homeless, and healthy donations are a plus. For now, they must settle with the little they have, pass out as much as they can, and accept donations graciously.
Delete Image
Align Left
Align Center
Align Right
Align Left
Align Center
Delete Heading