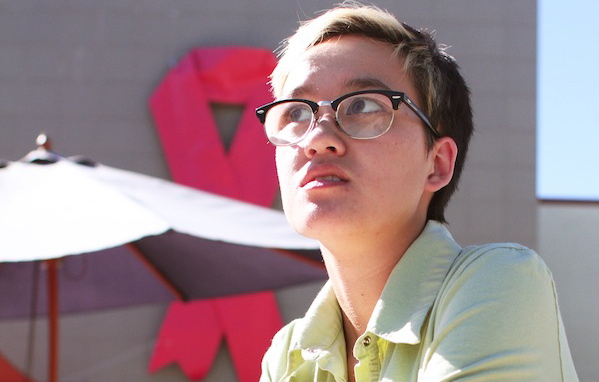 The 16-year-old Ventura resident feels this presidential election will very much impact the organization that she volunteers for as well as gay rights and gay marriage overall.

“I have seen some of the rather drastic measures that Mitt Romney has allegedly said he placed. Like he was going to take away [funding for] Planned Parenthood,” she said. “It might be harder for transgender people to get hormones that way. It could be harder for gay or lesbian couples to get any kind of protection, and heterosexual couples for that matter. Obviously, gay marriage is going to be jeopardized.”

Foothill senior Mimi Babb, president of the GSA (Gay-Straight Alliance) club, agrees with Dela Cruz that the outcome of the election will affect gay rights.

“It’s kind of obvious that if Romney wins, it’s not going to be very good for gay rights since one of his platform agendas is to make it so that gay marriage is defined between a man and a woman,” Babb said.

If Dela Cruz could vote during this presidential election, she said she would be greatly influenced by her mother’s point of view.

“My mom has always taught me to see both sides of the story. She doesn’t say ‘I’m voting Democrat because I’m a Democrat.’ She says, ‘I’m voting this way because I like their views and they happen to coincide with mine.’ ”

“Some of the more ridiculous stuff I’ve actually, this is sort of embarrassing, but I’ve gotten it from Tumblr. However, I have checked it out afterwards. I’ll Google it or I’ll hear it on the news or someone will be talking about it at school […] I do watch the debates when they’re on, and I do try to keep up with the Barack Obama Tumblr,” she said.

Dela Cruz becomes fired up about her views when she hears students or others in the media criticizing gay people.
“Honestly, I get pretty mad. I mean I get kind of almost irrationally mad because, you know, if it was a racial thing, other people would be mad but what they don’t understand […] it’s not very nice. Like it’s a horrible, horrible thing to say and it’s discouraging,” she said. {sidebar id=62}

Dela Cruz says that she has experienced ridicule for being gay herself.

“You’re preventing people from wanting to come out and express themselves and if you’re in the closet through high school, it’s horrible. It’s torture. I’ve tried it. It doesn’t work,” she said.

“You’re lying to yourself and everyone around you every day about something that’s just so easy to say but you’re afraid to say it because of the people around you, and that’s pretty much a form of psychological torture.”

Sophomore Morgan Castro, a friend of Dela Cruz’s and a member of the “Rainbow Umbrella” and the GSA club at Foothill, thinks that a lot of people say hurtful things. She says she wants these things to be addressed.

“People will always be like, ‘Oh my gosh, are you bi or lesbian?’ and it’s just because I have a deep, strong, ridiculously loud voice. All the stereotypes, all the horrible things people say, it gets me angry myself because I’m friends with Olivia and other people like Mimi Babb […] I think definitely my parents being open-minded about almost everything helped a lot with that,” Castro said.

Dela Cruz shares the same views as Castro and is overall looking for a way that gay rights will be recognized and welcomed even more during this election season.

“I just want people to be aware that this is a thing that’s happening. It’s not going to change. It’s happened throughout history, since the beginning of time. And it’s not a new thing and it’s not going to go away. It just needs to be accepted,” Dela Cruz said.

Editor’s Note: As part of a collaborative project with other high school journalism programs, this article was prepared by Dragon Press staff for the Ventura County Star to use in its special high school election package October 28, 2012.