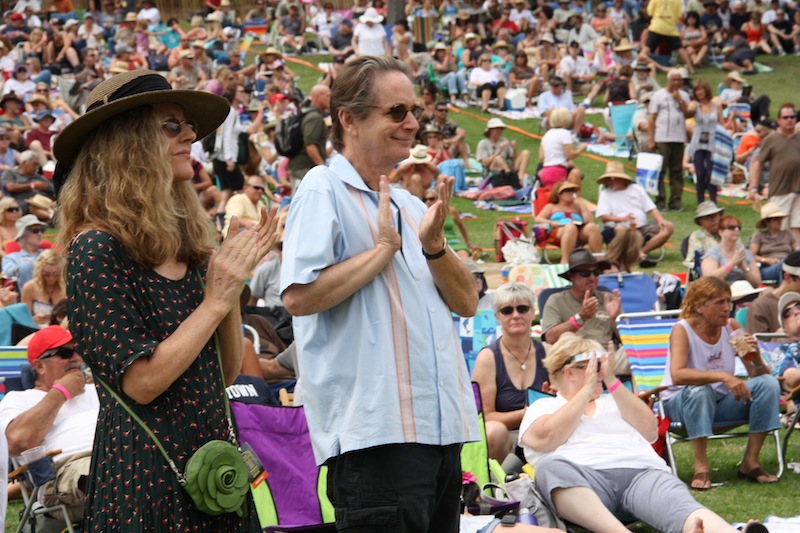 To kick off the celebration, the founder of the Ojai Raptor Center, Kim Stroud, released a juvenile red-tailed hawk from the hilltop.

“This is a great way to educate the public in order to protect animals and keep the wildlife,” Stroud said.

First to perform at the concert was Elvin Bishop.

“It was a lot more bluesy jam, less pop than I expected, which I really appreciated,” community member Deborah Thurber said.

Dr. John was next on stage. He became interested in music by spending time in his father’s record shop, and dreamed of becoming a pianist like the many musicians he listened to.

“I love to play music so much, having them singing to my music meant something good to me, I’m glad they listened to my records,” said John.

Not only did the crowd enjoy the performance, but the band members had fun as well.

“The audience was great. People here are really nice and enthusiastic,” said Sarah Morrow, who plays the trombone for Dr. John’s band.

The last act was a group called Blues Traveler, who made the crowd get up out of their seats to dance and sing along.

Craig Lieberg has been to almost every single concert and is always impressed with the musical groups that play.

“This event is important because it helps them [the conservancy] with their fundraising, and it’s important to preserve these beautiful hills we see around us. It is one of the most beautiful parks around,” Lieberg said.

The Ventura Hillsides Conservancy has put on the festival for ten years now. Proceeds from the concert go into conservation work, helping to acquire properties in the Ventura River and eventually on the hillsides, so that they can conserve space in and around Ventura.

“The Hillsides Conservancy make awareness of open space and people become aware of the environment. As a Coastal Commissioner that is one of the top issues in the coastal act, to make sure the environmental habitat is protected,” said Brian Brennan, who is a member of the California Coastal Commission and the Ventura City Council, “Environment associations like this go a long way.”

Tim Coonan is the board president this year, and decided to join the conservancy four years ago so he could continue helping the environment outside of his job with the Channel Islands National Park.

“I wanted to do some conservation work here on the mainland, so I joined the Hillsides and did some biological work for them in the river,” Coonan said.  “It is a very worthy cause and I’m happy I joined.”

Foothill junior Victoria Bonds volunteered at the event for the first time, and worked at the Ventura Hillsides Conservancy booth.

“It is very important to raise money so they can keep the hillsides and not let them become over-developed,” Bonds said.