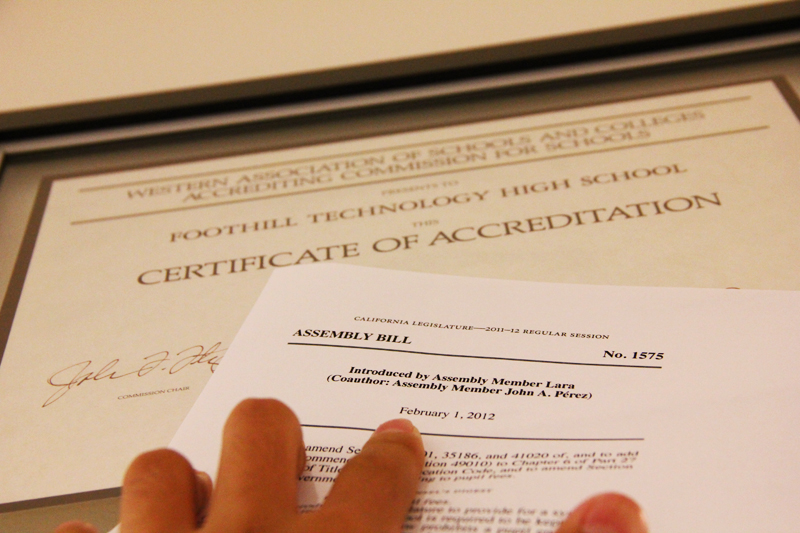 [dropcap size=dropcap]T[/dropcap]he majority of Foothill students and staff will be facing drastic changes in many classes, programs, and activities due to a recent bill awaiting the governor’s signature.

Many public schools across California have relied on money from parents and students to maintain various electives, advanced courses and extracurricular activities. The reinforcement of state Assembly Bill 1575 will demand change in the expenses and abilities of many of those programs.

“The assembly bill is nothing new­ – it is based on a law that has been in effect for many years. It is a reminder that we must comply,” Superintendent and Secretary to the Board Trudy Tuttle Arriaga said.

The bill reinforces the existing legislation that states it is illegal for California public schools to ask a student to pay a fee, deposit, or charge for an integral activity. This includes fees for supplies, class materials, equipment, or the opportunity for a class of a higher educational standard. Fee waivers for those who cannot pay can no longer be offered.

In the 1984 case of Hartzell vs. Connell, the Supreme Court concluded that any “integral fundamental part of elementary or secondary education” or “necessary element of school activity” was to be taken out of the school budget and not the students’ pockets.

Barbara Hartzell sued the Santa Barbara School District because they were asking parents for additional funds to compensate for the budget cuts that came into effect in 1980.

This ordinance was intended to protect the students’ right to a free education, as identified in Article IX of the California Constitution. {sidebar id=60}

“It is of the utmost importance that all students have access to education,” Arriaga said.

For the last 28 years, many California public schools have been asking parents and students to pay extra money for various programs, activities, and classes.

The first major student activity that will be affected at Foothill is the annual Magic Mountain field trip. Every year, the school promises to take sophomores, juniors, and seniors to Magic Mountain for a day in the fall if they meet the CST testing goals set by the administration.

In the past, students who wished to attend the trip were required to pay a fee for transportation and entrance to the park. Under the new legislation, students will be asked for a voluntary donation.

“The problem with that is we don’t know how many people are actually going to give this donation. We expect that most of our students and their parents will understand that it’s for our trip, but if we don’t get enough people to donate $40, then we won’t be able to go,” principal Joe Bova said.

Until the ACLU (American Civil Liberty Union) filed a lawsuit two years ago, student fees had been generally overlooked. The file claimed that two students in the Los Angeles Unified School District were not given equal opportunity because of their lack of funds.

The ACLU has not returned a call made by The Foothill Dragon Press requesting an interview.

“This landmark decision marks the first time that any California court has held that the State is ultimately responsible for ensuring that no child be charged fees for educational materials in our K-12 system,” said Mark Rosenbaum, chief counsel of the ACLU of Southern California, according to their website.

AB 1575 is currently waiting on Governor Jerry Brown’s desk for approval. Brown vetoed an earlier version of the bill on the grounds that it was too extreme.

The bill also establishes a complaint process for those who believe that their school is not abiding by the law in terms of fees, deposits, and charges for an activity.

Brown is expected to approve the revised version, which would come into effect for the 2012-2013 school year. This has raised concern at Foothill and in public schools across the state who will have to reform aspects of their budget.

“I don’t think anyone disagrees with the spirit of the lawsuit in terms of making sure that all kids have access to activities,” Bova said.

The Ventura Unified School District is considering the changes that will likely have to be made once the bill is signed.

“In the past, we’ve had the luxury of saying ‘Parents, you need to pay this really whether you can afford it or not,’ and we can’t do that any longer,” VUSD School Board President Velma Lomax said.

Programs, such as speech & debate, art, music, science, and journalism, will also have to adapt to the restrictions on fees. Because the new bill cannot be fully enforced until March of 2013, many Foothill students are unaware of the possible effects.

For example, sophomore Johnathan Carriger said he’s never even heard of the bill.

Some teachers, like Cherie Eulau, want to raise awareness of the new rules among the students.

She hopes to have the school district attorney come talk about AB 1575 at PAAC (Political Action and Awareness Club) so students will be well-informed on the topic and can attend a school board meeting to “give their two cents” on the subject.

Eulau thinks that the new bill will present many difficulties for public schools in California.

“The goal is admirable, making public education free. But like lots of government programs, the effect is different than the intention,” she said.

She believes that the creators and supporters of the bill underestimate the importance of the programs that will be affected.

“Part of me sort of wants to say ‘just stop everything,’ so California can see how much we do outside of just teaching in a classroom,” Eulau said. “I’m not advocating it. It’s extreme, but it makes the point. No sports, no AVID, no anything… it would make people appreciate their value more.”

English teacher Melanie “Captain” Lindsey also thinks that the reinforcements will be more detrimental than beneficial.

“It’s a fight fought from a time that no longer exists,” she said. “[The creators and supporters of AB 1575] need to re-examine what 2012 looks like, what education looks like. They’re fighting for equality in free education, but instead they’re diminishing free education.”

Editor’s note: This is the first in a series of stories about the potential impact of AB 1575.

This article was updated at 4:45 p.m. on Saturday, September 15 to correct the spelling of Cherie Eulau’s name.