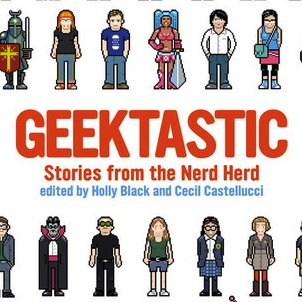 Many Foothill students can relate to being ridiculed for going to a “nerd school” or being a “geek,” but a silver lining to these terms takes itself in the form of a book – a book about geeks, nerds, and the things they love.

“Geektastic: Stories from the Nerd Herd,” an anthology of short stories written by several different authors, edited by Holly Black and Cecil Castellucci, celebrates all areas of “geekdom” through its memorable characters and heartfelt storylines.

The idea of this book arose when Black and Castellucci met at Comic-Con and composed a story about a Jedi Knight (Star Wars) and a Klingon alien (Star Trek) who fall in love despite the disapproval of their respective fandoms. In order to publish their story, they contacted different authors and compiled their short stories into one “geektastic” book.

Whether you’re into “Star Wars” or “Star Trek,” cosplay or role-playing, anime or manga, “Lord of the Rings” or “Buffy The Vampire Slayer,” there is something for every reader to identify with.

The book, albeit having different authors, has a consistent tone that connects the stories together. The stories are broken up by funny, witty comics that give the reader a break between narratives and are sure to get a few chuckles.

A personal favorite of mine was “One of Us” by Tracy Lynn, the story of popular cheerleader named Montgomery K. Bushnell who pays a group of “resident geeks” to teach her the “ways of geek,” in order to impress her jock boyfriend. However, after spending quality time with them, she discovers she has more in common with them than she originally thought. The interactions between Montgomery and her geek tutors are believable, and their characteristics are dynamic and well-rounded.

It isn’t just the characters that make this book unique and special, but the situations the characters face and how they use their interests to overcome these problems. They deal with everyday life situations that the reader can identify with, such as moving to a new school and being bullied like Felicity, trying to find the courage to defend friends like Tony, or discovering the true personalities of other people, like Jane.

The characters are easy to identify with because, like them, we use the movies, books, TV shows, plays, and music we love in order to overcome tough situations. These characters are extremely human.

With a mix of light-hearted and bittersweet tales, a multitude of quirky comics, and a wide-range of memorable characters, “Geektastic” is the perfect book to carry around campus and read after a test or right before class starts. “Whether you’re a former, current, or future geek,” as the book’s summary says, “Get your geek on!”