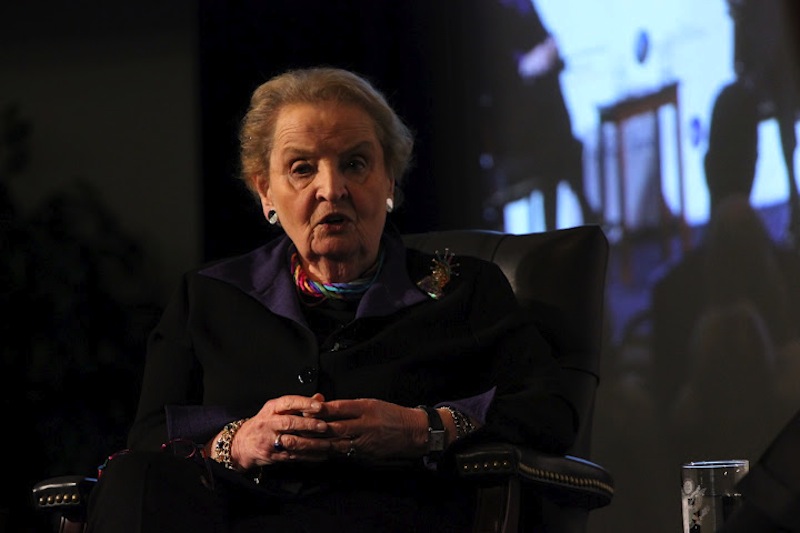 Myroslava Gongadze was only 28 when her husband, Georgiy Gongadze, was kidnapped and killed for his work as a reporter investigating corruption in Ukraine.

“Seeing what is right and wrong was like breathing air for him,” said Myroslava of her husband at the Ronald Reagan Library on Tuesday.

Gongadze, who became a human rights activist after her husband’s death, was one of several speakers at the library’s “Democracy in The World After Thirty Years” event, which was held to commemorate the thirtieth anniversary of President Ronald Reagan’s Westminster Address.

The event began around 9:30 a.m. with a discussion between former Secretary of State Madeleine Albright and former Peruvian President Alejandro Toledo on how democracy has changed over the past 30 years.

Albright shared her belief that two essential parts of democracy are the existence of opposing parties and a combination of political and economic development.

“The bottom line is that people want to vote and eat,” Albright said.

Albright, who was honored by President Obama last week with a Medal of Freedom, was also awarded the National Endowment for Democracy’s (NED) Democracy Service Medal Monday night.

“Secretary Albright has been involved with the NED and the struggle for democracy all her life,” said NED President Carl Gershman. Gershman also served as the moderator during the conversation.

When asked about how she views the current state of democracy, Albright answered with a laugh, “I’m an optimist who worries a lot.”

{sidebar id=59}Toledo, who has received over 100 death threats during the course of his political career, cautioned against deceiving leaders.

“There are some people who put on a mask of democracy just to win elections,” Toledo said.

After Albright and Toledo finished speaking, an excerpt of the documentary “A Whisper to a Roar” was shown to introduce a panel of activists who shared their own experiences with democracy, or a lack thereof.

Tunisian Radwan Masmoudi, Ethiopian Birtukan Midekssa, Chinese Xiao Quiang and Gongadze spoke about the struggle for democracy at the conference.

“It’s very important to understand that silence doesn’t save you,” Gongadze said, advising the audience of about 60 people to speak their mind and seek the truth.

Masmoudi, who was once arrested for a week as a high school student for his activism in Tunisia, is hopeful that with support from the international community, Tunisia will soon be a democratic “trendsetter in the Arab world.”

It was that week in prison and the time he spent in the United States for college that helped solidify his belief in democracy.

“They often say that America ruined me,” Masmoudi laughed. “I learned to be free.”

At noon, attendees and speakers met for lunch in the Air Force One Pavilion. After a three-course meal, former Secretary of State George Shultz gave a closing speech.

In response to an audience member’s question regarding Israel and Iran, Shultz critiqued the United States for having a lenient policy towards Iran.

“We should be confronting Iran a little more forcefully,” Shultz said. “And why are we hesitating with Syria? Assad is in bed with Iran.”

Shultz ended his address by telling the audience that the opportunity for doing something helpful has never been greater.

Despite the differences in age and nationalities among the many speakers, an idea they all seemed to share was embodied by what Masmoudi said about freedom.

“Life without freedom is not worth living,” he observed. “That is the lesson.”