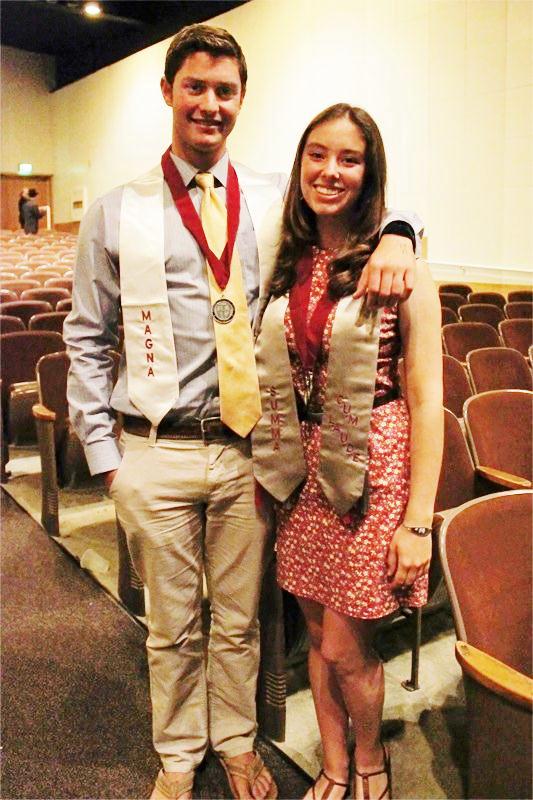 After four years of classes, bonding with other classmates over cram sessions and coffee, and countless hours of homework, Foothill seniors slowly piled into Buena’s auditorium Monday night to receive recognition for all of their work at the annual Senior Awards Night.

“They [the class of 2012] embody the back of the senior shirt, which is that the world is not ending in 2012, the seniors are taking over,” assistant principal Carlos Cohen said.  “They have a can-do attitude, and I believe it is that attitude that is going to help them achieve things that most kids at most schools won’t be able to do.”

The event began by honoring the students who received scholarships and recognizing individuals who participated in F.I.R.E., Associated Student Body, Speech and Debate, Journalism, the BioScience Academy, and more.

“What a great future our country will have because of all you hard working kids,” Buenaventura Senior Men’s Golf Club Scholarship presenter Don Brunner said. {sidebar id=58}

“I was surprised I was even nominated for the Dragon Hall of Fame awards,” club and school service nominee Lujain Al-Saleh said. “Being nominated was an award in itself.”

After announcing that the senior class of 2012 would be graduating with Foothill’s highest API score of 914, Bova proudly presented this year’s Best All Around Male and Female awards to Henry Ashworth and Anaika Miller.

“I am extremely honored and gratified, and I honestly didn’t think I was going to win the award. I was pretty surprised. I actually made a bet with my friends that I wouldn’t win, and now I owe them a sandwich,” Ashworth said.

Ashworth and Miller were both shocked that they received the award, but felt honored to win.

“I was flabbergasted, actually. I never thought that I would be in the running for it, and just to be nominated would be such an honor,” Miller said.  “It is nice to recieve recognition for the work that I put into the school.”

The night ended when Ashworth won a raffle for a new laptop and Rick Smith became the owner of a new iPad.

Editor’s note: This article was updated at 9 p.m. on Tuesday, June 5 to credit teachers Justin Frazier and Heather Ferris with helping at Senior Awards Night. It was updated again at 11:20 to correct the mistake made regarding Trevor Kirby winning an award for BioScience Academy.