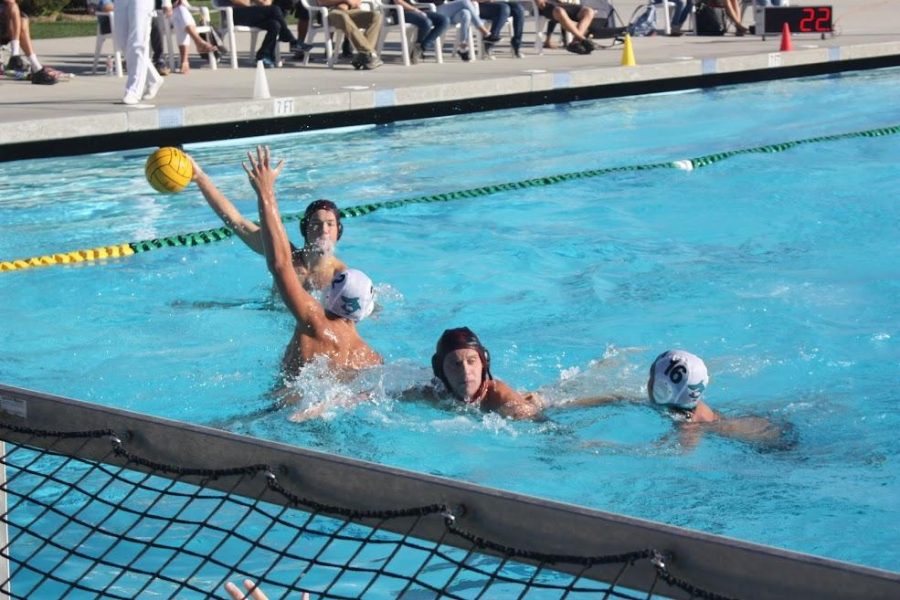 As the wind ripped through the Ventura Aquatics Center, junior Niko Ford threw the ball while surrounded by opposing players to senior Mitchell Caldwell, who made a backhand shot and scored one of Foothill’s first goals.

As the wind ripped through the Ventura Aquatics Center, junior Niko Ford threw the ball while surrounded by opposing players to senior Mitchell Caldwell, who made a backhand shot and scored one of Foothill’s first goals. It was “probably one of the best quality plays,” according to Head Coach David Wallace.

At their final home game of the season on Wednesday, the boys’ water polo team played against Malibu High School. The Sharks defeated the Dragons with a final score of 3-15.

During the first quarter of the game, junior Kevin Waechter was first to gain possession of the ball and attempted to score within the first minute of play. Malibu regained possession of the ball shortly after and made their first goal of the game, with five and a half minutes left in the seven minute quarter. With three seconds left on the clock, Malibu tried to score once more, but the goal was blocked by sophomore and goalie Alex Abele.

Once the second quarter began, Malibu made three more goals in the first three minutes. After Waechter got the ball and attempted to score, the Sharks scored five more consecutive goals, with one in the last fifteen seconds. The first half ended with a score of 0-9.

In the first 30 seconds of the final quarter, junior Parker Harris was ejected, which is when a player is temporarily taken out of the game for playing too roughly. Malibu did not score on this advantage and the ball was taken over by junior Dale Starr who made one attempt to score and Caldwell, who made two attempts. Malibu made the last goal and the game ended with a final score of 3-15.

Even though the Dragons were defeated, Wallace believes that the team has improved since the last time they played Malibu.

“We controlled the ball better. We gave them more to think about on defense; we played smart defense,” he said. “We much improved from the first time we played them this season.”

Caldwell noticed how the team progressed well but fell short by not making shots.

“In terms of fundamentals, I think we definitely made a huge progress, but in this game, [we] fell to just simple turnovers, although we didn’t turn over the ball as much,” Caldwell said. “We still need a little work on that and we need to make more shots.”

Waechter saw the team improving their focus as the game progressed.

“The most exciting part was us focusing on the game more, and us coming back,” Waechter said. “It was definitely exciting because we all joined as a team and brought the team together.”

“When we came together as a team, we played as a team and were focused as a team,” he said. “It’s better to stay as a team rather than an individual.”

Wallace saw that the team needs to “get faster” in the water, which he thinks swim season will help them improve.

In the next few years, Wallace hopes to compete in the California Interscholastic Federation (CIF) playoffs and place first in the Tri-Valley League.

The Dragons play their final two games of the season against Cate School on Friday, Oct. 30 and Carpinteria High School on Wednesday, Nov. 4.

“There’s a lot of hope for the program in the future. We still have two more games, so we are going to try to win those games,” Wallace said. “We played real[ly] close to Cate, only losing to them by two, so we are hoping to get another win before the season is over.”

Wallace thinks that respect is one of the most important aspects in and out of the pool, despite wins and losses.