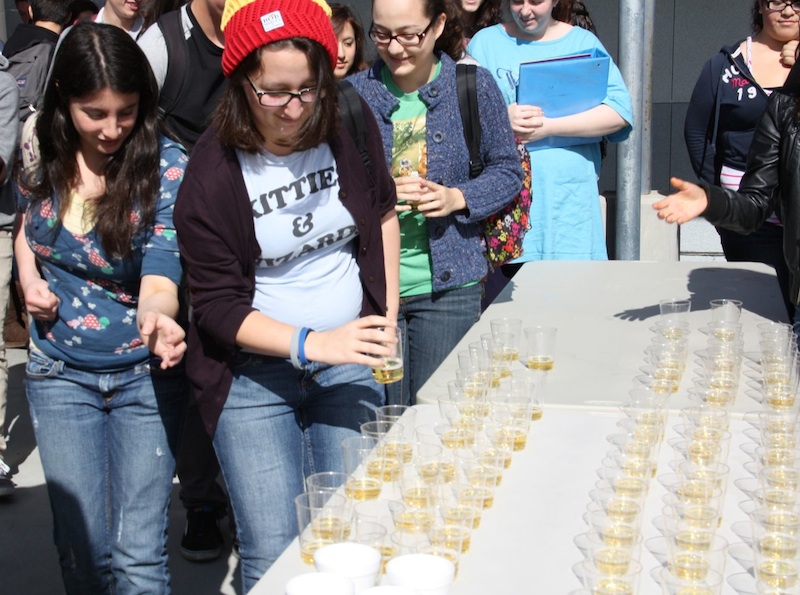 With second semester under way and graduation approaching, Foothill is encouraging the Class of 2012 to finish strong. Senior advisors Melanie “Captain” Lindsey and Justin Frazier hosted the annual senior rally to help inspire them to continue working hard through their last semester.

“It celebrates the academic achievements of the senior class and it also establishes a bonding period so they can become more like a family,” said Senior Class President Trevor Kirby.

During the rally, this year’s senior class officers, Trevor Kirby, Lujain Al-Saleh, and Taylor Rios, were recognized for planning the Seniors Only Academic Rally.

“It was really important because I wanted a place to recognize the three of them because they are so in tune with the class and so responsive to the needs of the class. I’ve never seen senior class officers like this before,” Lindsey said, “And I wanted a place for them to stand up in front of their peers and be recognized.”

Current twelfth grade teachers selected students for awards in four categories, most achieved, most improved, most participatory, and most inspirational. They also awarded the seniors that have completed 25 hours of community service for their hero project. The highest recognition of the day was of the valedictorian and salutatorians.

Valedictorians Averi James and Alexa Constantine took all honors and AP classes during their four years and never received a grade less then an A, meaning they received a 4.9 on a 4.0 scale.

While cheering and applauding their fellow peers, seniors were divided into four teams based on where they were seated to play some games. Each team was assigned a color, red, blue, yellow, and green, with streamers and banners representing the colors showing their spirit.

Tissues were flying, balloons were popping and pie was covering faces, as representatives from each color competed to earn point for their team. At the end, the team scoring the most points received a prize.

“The games were lots of fun because they were the most interactive and a lot of people were dying to volunteer to be a part of it.,” said Al-Saleh, senior class vice president.

Also, members of the senior class performed three songs for the rest of the grade .

At the end of the presentation, the seniors raised glasses of apple cider and toasted to finish strong in their last semester at Foothill.

The senior class finish strong motto is, “Regardless of what came before or of what has yet to come, what matters most right now is how I choose to respond to the challenge before me. The choice is mine and I choose to Finish Strong.”