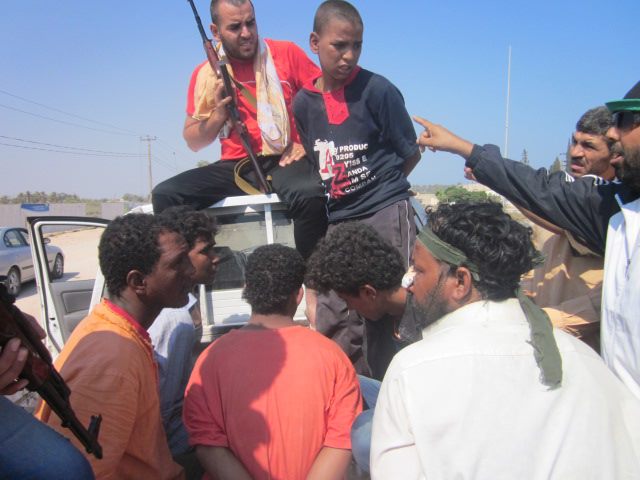 Ben Gill
Jalal al-Gallal was a father struggling to shield his children from the atrocities being committed right outside his door in Benghazi, Libya, this summer.
At the same time he was doing his best to convey the gravity of the situation to his 8-year-old son, Mohammed.
“I think he found it difficult to comprehend, but I had to be an adult with him,” al-Gallal said in an interview this month. “It was not something I could hide. He could hear the weapons. He could hear the firing or see the funeral processions that were taking place everyday in the streets, so I had to be as honest as possible.”
Charred husks of dead soldiers lay in the streets. Young men were hell-bent on winning their freedom at any cost. In February, the people of Libya followed in the footsteps of those throughout the Middle East; they took up their arms against their country’s oppressive dictator of 42 years, Col. Muammar Gaddafi.
And within eight months, the man who claimed he would “purge Libya inch by inch, house by house, home by home, alleyway by alleyway” was captured in a sewer pipe and assassinated by the very “rats” he had previously vowed to kill.
The Tunisian and Egyptian revolutions provided the impetus that propelled the Libyans towards theirs, said al-Gallal, who is now the media committee spokesmen for Libya’s interim government, the National Transitional Council (NTC).
“The people of Libya were ready to rise against Gaddafi,” he said. “After 42 years of tyranny, of human rights abuses, of a state of hopelessness and subjugation, the time was right.”
The Foothill Dragon Press set out to explore the role of children and youth in the Libya’s civil war, the impact it had on them, and the challenges of creating a democratic nation in which their voice is heard. Skype and telephone interviews were conducted in November and December with two international journalists, a UN Under-Secretary-Generaland al-Gallal.
Like other revolutions throughout the Middle East this year, the uprising in Libya was driven by the people, many of them ordinary citizens from all walks of life. While this force was composed of individuals of all ages, a large portion of the fighters were young men, some as young as 17.
However, in contrast to wars in Somaliaand Sierra Leone involving the widespread forced use of child soldiers, Libya’s NTC implemented measures to prevent children from fighting on the front-lines.
‘In some places they were turning children away’
“They sent down a command order asking that children not be recruited, and in some places they were turning children away,” said Radhika Coomaraswamy, the UN Under-Secretary-General for Children and Armed Conflict.
First-hand observers of the Libyan conflict witnessed adherence to the policy forbidding the use of children in direct combat.
“I saw them preparing meals, and I saw them helping prepare (improvised) weapons…most of the people that I met were going to great lengths to say that they were not using under-age people to fight because they had more than enough volunteers to do that,” said journalist Tony Birtley, correspondent for Al-Jazeera English. 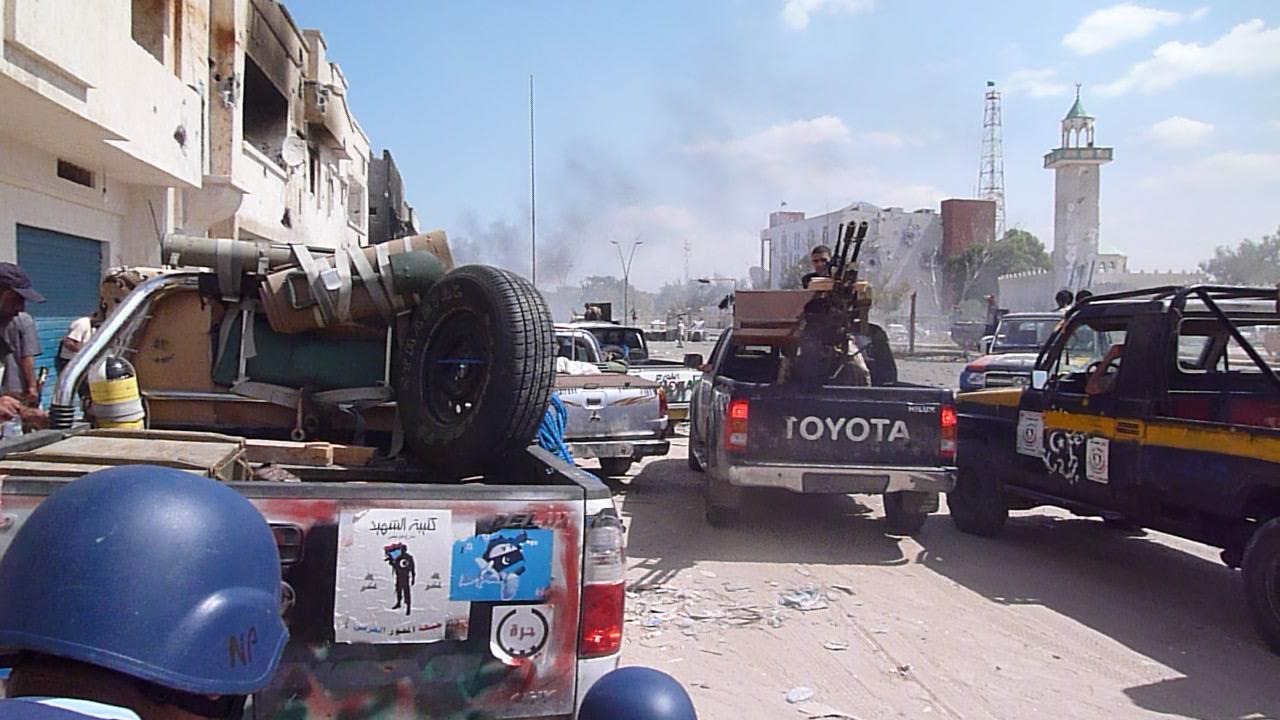 There were instances of child soldiers being used by pro-Gaddafi forces, according to journalists who interviewed teens in Libya. Gaddafi loyalists were said to have forcibly recruited minors from schools in Tripoli to fight against the revolutionaries.
The Foothill Dragon Press hasn’t been able to independently verify these reports; however, Zeina Khodr, a correspondent for Al-Jazeera English, said she witnessed the beating of a suspected pro-Gaddafi child soldier captured by rebel forces on the road to Tripoli, Libya.
“I saw one (minor). They put about six men in the back of a pickup truck, one of them was a 14-year-old boy…they were hitting his head and pushing him around and telling him, ‘Tell her. Tell her. Tell her how they made you hold a gun and that your father was holding a gun, but we killed your father, and we found you with the gun,’” she said.
‘And I was telling the fighters to stop it. He’s a child, leave him.’
“The boy was just scared [expletive],” Khodr said. “And I was telling the fighters to ‘stop it. He’s a child leave him.’ ‘No (said the rebels), we’re not gonna do anything to him. We’re just gonna take him back to our command headquarters…’”
The boy was the only supposed under-age fighter she encountered during her coverage, Khodr said, and all the dead bodies she saw were men.
Because the Libyan civil war was fought largely in civilian inhabited areas, bringing the bloodshed directly to many people’s front doors, the psychological impact of the war on Libya’s youth may be widespread.
“I had two different reactions from my boys,” said al-Gallal, a father of two. “The elder one was extremely anxious, he was scared…he wanted really to leave the country as soon as it was possible.”
The younger child responded with enthusiasm.
“The younger one was very excited. He was asking very inquisitive questions: ‘When will we get rid of (Gaddafi)? Can I come with you and check the weapons?’ ” al-Gallal said.
Al-Gallal said he managed to send his children away to avoid them seeing atrocities. 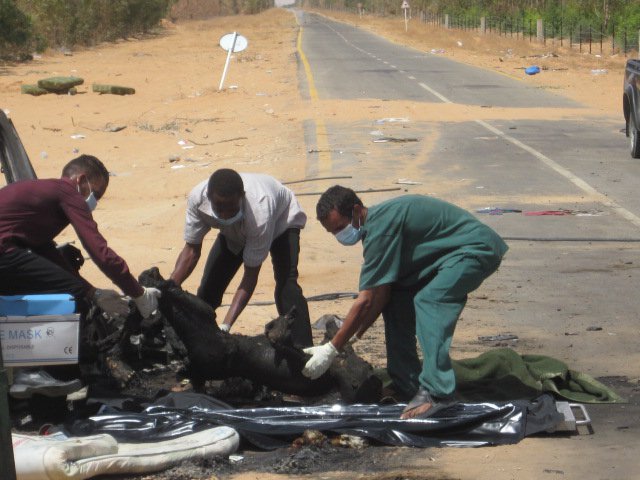 “I explained to Mohammad this is war–this is the younger one–it’s not a game. A lot of brave young men are dying, but it is something that is necessary in order that they would have a better future. I think he found it difficult to comprehend.”
In certain cities within Libya, especially Misrata and Zawiya, the fighting was particularly fierce and prolonged, and exposure to violence was more intense.
In the Battle of Misrata, for example, Gaddafi soldiers surrounded revolutionary forces in the city for nearly four months between February and May 2011, resulting in 1,083 dead and approximately 4,000 wounded.
“There is no doubt that for the people of Misrata and other cities the war was protracted and was long…they (children) have been extremely affected,” said al-Gallal.
The difficulties that soldiers and civilians face transitioning from a war zone to a peaceful environment are numerous, according to Birtley, who has spent 30 years reporting international conflicts.{sidebar id=45}
“They’re (revolutionaries) basically going from this environment whereby it’s not anarchy but it’s a combat situation where there’s no black and white. There’s lots of gray areas,” Birtley said. “The problem (for young fighters) is readjusting, and decompressing, and coming back to normality if they can.”
Witnessing graphic violence in combat makes readjusting very difficult, he said.
‘It’s a pretty hideous way of living your life’
“Readjusting from seeing what some of them are seeing: colleagues and compatriots being blown apart…people ripped apart by rockets, mortars, and tank rounds…it’s a pretty hideous way of living your life,” Birtley said.{sidebar id=46}
Some have been critical of the NTC’s response to helping children cope with the long-term psychological effects of the bloodshed. This includes al-Gallal, the NTC’s own media spokesman, who spoke honestly of his disappointment.
“Unfortunately, the National Transitional Council does not comprehend the effect of this psychological trauma that these children have gone through,” al-Gallal said. “And I think they have not prioritized it…so far we have not seen any progress from the NTC regarding this.”
In the absence of adequate psychiatric care from the government, non-governmental organizations (NGOs) and private Libyan psychologists have stepped in to fill the void and help children disturbed by the violence, he said.
To understand the sacrifice many of these young men made, said journalist Zeina Khodr, one must recognize the motivations driving them to risk life and limb for their nation’s liberty.
Libya’s youth fought for the chance to get a proper education, more job opportunities, the ability to take part in the decision-making process, and the chance to have a voice and live without fear, she said.
‘If things don’t go their way they are perfectly likely to pick up their weapons again’
But now that these young men have finally overthrown the symbol of their oppression and sampled freedom, the stakes are higher, Birtley said.
“If things don’t go their way they are perfectly likely to pick up their weapons again and fight for what they believe in,” he said. “Somebody said to me, ‘The first revolution was difficult, the second one will be easier.’ “
The revolution was, as al-Gallal characterized it, carried out by the youth, with the rest of the population joining later.
“I think the initial intentions of the NTC were good,” he said. “But I think… as they got entrenched in their positions… they’re losing sight of the reason for this revolution.”
Al-Gallal feels that the NTC “must engage the youth” in order to be more inclusive during the government’s development. 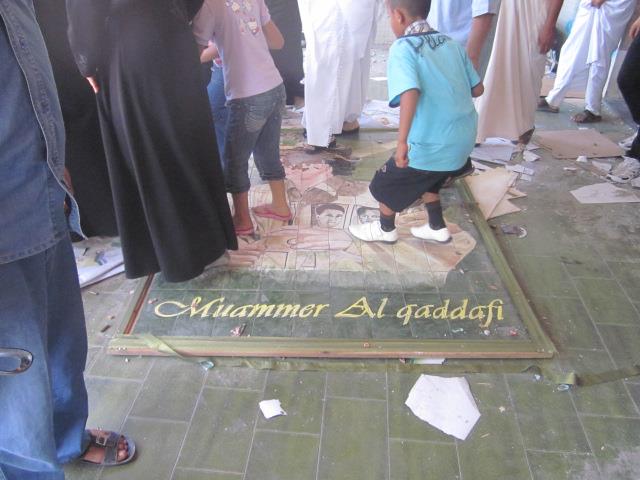 “The youths are growing frustrated, they’re growing resentful,” he said. “They feel they’re being bypassed, given all the sacrifices that they have made.”
The collective demands of Libya’s people have already begun to rear their head. On Monday, in the city of Benghazi, approximately 2,000 protesters took to the streets once again, calling for transparency and justice from the nation’s leadership.
The most critical factors for the NTC to consider, said al-Gallal, are transparency, equality for opportunity, and government accountability.
“Engagement of the whole population until we get to the election of the National Assembly; I think that is the single most important thing Libyans need to break away from the past,” he said. “These are the fundamental things we (the NTC) need to attack and address immediately.”
With the will of the people struggling against the political power of the government, the outcome of the revolution remains uncertain.
“I think the National Transitional Council is not doing a very good job, ” al-Gallal said. “I think they need to think very carefully about this and act promptly. Otherwise, we might just have the second phase of the revolution happening in Libya as it happened in Egypt.”
Delete Image
Align Left
Align Center
Align Right
Align Left
Align Center
Delete Heading