The New SAT: What you need to know and what others think 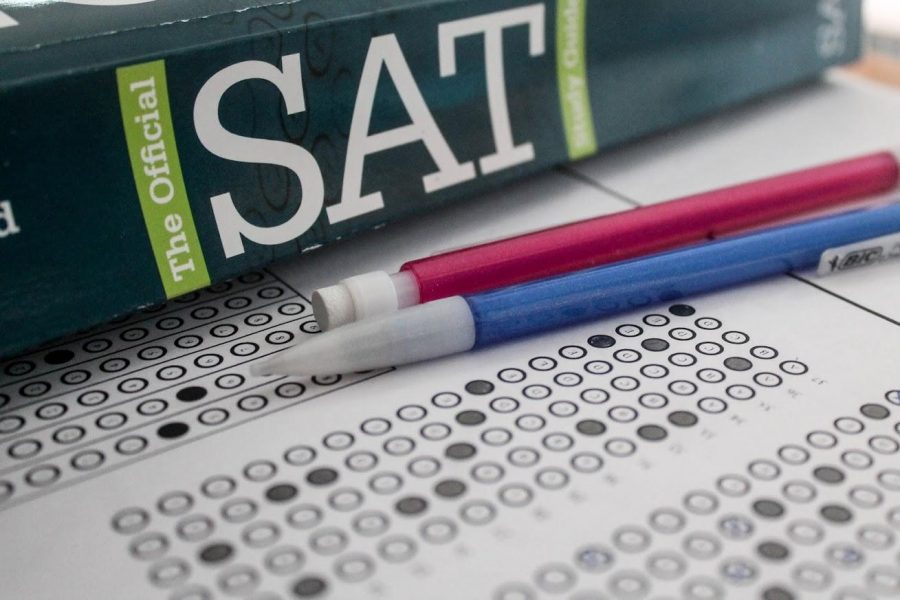 On March 12, 2005, the SAT was administered and brought along changes the test hadn’t seen before. This included an essay portion, an expanded mathematics section and a changed scoring scale from 1600 points to 2400 points.

On March 12, 2005, the SAT was administered and brought along changes the test hadn’t seen before. This included an essay portion, an expanded mathematics section and a changed scoring scale from 1600 points to 2400 points.

Now that a decade has passed, the SAT is facing changes once again and this new, redesigned SAT will be administered on March 5, 2016.

The SAT will be changed in many areas, including scoring, sections, question types and the skills necessary to answer the questions found on the test.

Many of the new changes reflect the Common Core State Standards, and will employ the skills and thinking often used in Common Core classes.

According to College Board’s website, “The new test will be more focused on the skills and knowledge at the heart of education,” rather than “memorizing words and facts you’ll never use in the real world.”

Previously, the top score was 2400, with 800 points being the maximum in each of the three sections: Critical Reading, Writing and Math, with the essay being scored separately and counting towards the Writing section score.

Now, the SAT is returning to the 1600 point scale, with 800 for the two mandatory sections. Reading and Writing are joined together in a single section called Evidence-Based Reading and Writing. Math has been changed as well, but is still 800 points.

Additionally, the guess penalty will be removed. Previously, if a student were to answer a question incorrectly, their score would be deducted a quarter of a point rather than zero points if they left it blank. This will be removed, encouraging the use of critical thinking.

Reading and Writing will be replaced with Evidence-Based Reading and Writing, which is designed to test analysis skills of previously published documents, finding evidence to support a claim and using vocabulary in context. Instead of only answering a question, you will be required to support your claim using a citation.

Although College Board has been frequently advertising that the essay is optional, some colleges still require it. University of California schools, for example, will be requiring students to submit essay scores. Cal State University schools, on the other hand, will allow the student to choose if they will take the essay.

Vocabulary has been changed to include words that “you will probably encounter in college or in the workplace long after test day,” according to the College Board’s website.

The SAT will be employing a heavy amount of algebra skills, such as linear equations, systems and data analysis. Not only is algebra tested, but also some geometry and trigonometry skills.

Although calculators were previously permitted at all times of the mathematics sections of the test, the new SAT includes a “no calculator” portion of the test, designed to test understanding of math concepts.

Interpreting and creating graphs will also be important for the SAT, including questions that may require the test taker to analyze the graph.

Is the new SAT a Common Core test?

Michael Boothroyd, Executive Director of Pre-College of Kaplan Test Prep said in an interview with the Dragon Press that “the new SAT reflects a lot of the Common Core philosophy. It is not a Common Core test, […] but obviously what is in the Common Core is embedded in the SAT, and they’re closely correlated.”

This direction that the SAT is taking has caused concern for many people, students and staffers alike. Counselor Steve Boyd said he thinks the change should of happened earlier so students would of been prepared by the time they had to take the test.

“The change is positive; I don’t think it’s fair,” said Boyd. “If you’re going to make a change, why start in the 9th grade year?”

Many students, such as junior Bianca Copeland, also share the same concerns over the influence of Common Core.

“I don’t particularly like it because [the 11th grade] hasn’t been trained and properly educated for that because now there’s Common Core classes like Math 1,” Copeland said.

“I feel like we’re not prepared for that, but I’m glad we have teachers […] that are giving us assignments that do have Common Core paragraphs.”

“Common Core, a lot of it just doesn’t make sense, it’s really underdeveloped and the kids struggle,” Hoover said. “I’m a little worried for it, just because I feel it’s not going to be that great because of the new changes.”

English teacher Jason Dinkler doesn’t think that the change will be too drastic and likes the fact that the test is including more relevant skills such as citing evidence.

“If it’s more relevant, it’s obviously much more practical, and therefore a better exam,” Dinkler said. “I would see the value of it being something that’s really important for [students] ten years from now using it that way.”

Sophomore Kainoa Barrios believes that the ability to understand the question is more important than the curriculum you have been taught.

“It really doesn’t matter, regardless of whether math education we use, whether it’s Common Core or something else,” Barrios said. “I feel that as long as you can understand it, it makes sense and it’s intuitive, it should be fine.”

How can I prepare for the SAT?

The PSAT is highly advised by Boyd, and many students plan on taking it.

“The number one thing […] 10th and 11th graders can do is take the PSAT,” Boyd said. The PSAT is offered on campus and for the first time, during the school day.

Many students plan to take the PSAT, and it will be a key study component to students such as sophomore Sherlyn Khouvilay.

“I’m going to look over the booklet that they gave us,” Khouvilay said.

After being informed about receiving practice tailored to PSAT results, she thinks that the new feature is a good idea.

“You can help get the answers that you got wrong, and learn why and how to do it,” she said.

“I was planning to take the practice [SAT], and I was going to learn from my mistakes,” Hoover said. “Go online, there has to be stuff online that you can learn from, and you just got to learn from that kind of stuff, the material that they give you.”

Another reason the PSAT is heavily recommended is because it allows the student to get an idea of the duration of the test.

“I would say it’s a test of perseverance as well because it’s a four hour exam, so make sure that you are taking the PSAT, and you know, the reality of the PSAT will give you a better perspective on the time that it takes for these exams,” Dinkler said.

Boothroyd believes that success with the SAT ultimately lies within school.