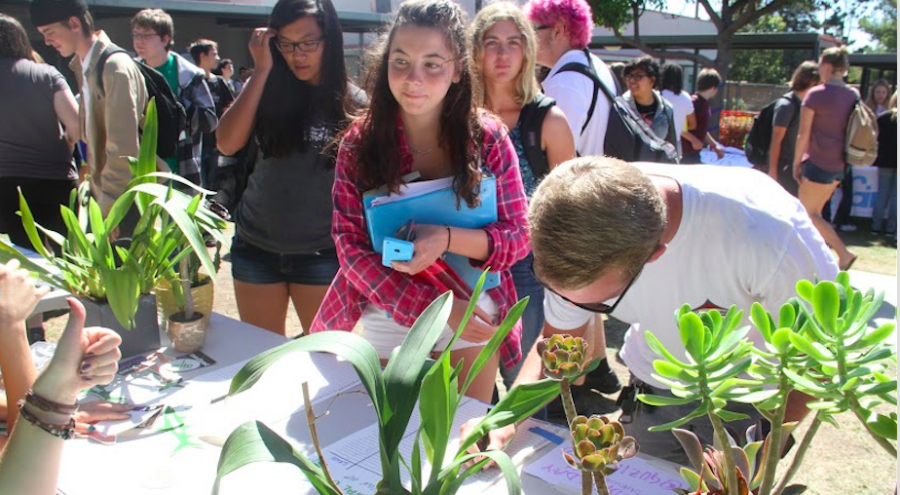 Yesterday during lunch, students flocked around decorated tables with colorful signs to join some of Foothill’s numerous clubs. The Foothill Club Rush offers students an opportunity to find their interests and pursue them in a supportive community.

Yesterday during lunch, students flocked around decorated tables with colorful signs to join some of Foothill’s numerous clubs. The Foothill Club Rush offers students an opportunity to find their interests and pursue them in a supportive community.

Associated Student Body (ASB) Advisor Melanie “Captain” Lindsey believes that clubs are “good, the more variety we have, the more potential we have for involvement of those students.”

Lindsey also believes that more extracurricular activities, such as clubs, students participate in, the better the likelihood of going to college is.

Wanting to join four different clubs, sophomore Noel Domke says that she most enjoys “finding other people with the same interests” and “being able to talk about the same things.”

Domke finds Club Rush “great because a lot of students at Foothill tend to be very focused on academics and these clubs give them time to focus on other things than academics, and hang out with friends.”

Her statement holds true with two other Foothill students, Sam Bova and Ian Canby. Both freshmen agree that the best part of clubs is making friends with people who have the same interests.

Mary “M” Mendoza, a senior and founding member of QSA, became club president because she saw the need for youth to have an environment that allowed them to express their sexuality and gender.

At first Mendoza was nervous as she didn’t know if “teachers were willing to host [their club]” but was surprised when a lot of teachers stepped up to the calling and offered.

“I think it’s actually really awesome that we have all of this, and students can run it, with all their different interests, and it’s a really great way to collaborate ideas,” Mendoza said.

Freshman Ryan Sequeira simply stated, “I think it’s a good idea because you get to see all the clubs in just a short time, you can get just a first impression.”

Correction: An earlier version of this article incorrectly stated the number of clubs and interest groups that were present at Club Rush. There were 20 groups present, including KIWIN’s, Movimiento Estudiantil Chicano de Aztlán (M.E.Ch.A), Yoga and the Fellowship of Christian Athletes.