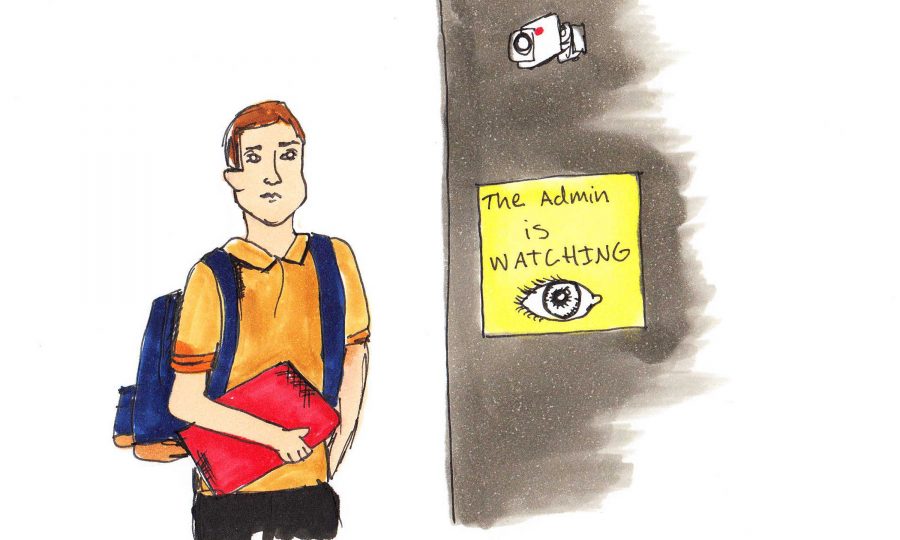 Our schools are institutions dedicated to providing a secure environment for the academic and social growth of the nation’s children. Thus, the implementation of security cameras have become a ubiquitous effort to ensure the preservation of this promise.

Our schools are institutions dedicated to providing a secure environment for the academic and social growth of the nation’s children. Thus, the implementation of security cameras have become a ubiquitous effort to ensure the preservation of this promise.

However, security cameras are a clear demonstration that schools have failed to uphold the safe learning environment they pledged to incorporate, relying on constant surveillance of all students, destroying the atmosphere of comfort with their ominous presence. These monitoring systems should not be implemented into schools.

The 2013-14 school year saw 75 percent of public schools utilizing cameras, in which 89 percent of the accounted high schools did so as well. These monitoring devices are designed to prevent illegal activity within schools such as possession of unlawful drugs, sexual assault and harassment, and forms of violence. However, such activities should be minimal in any school; it should be an initiative to ensure that such predicaments are repressed through directing of school officials and teaching from instructors

If criminal activity does occur within a school, then that institution has failed to promote an invulnerable environment.

It can be argued that, despite a school’s effort to advocate for a safe atmosphere, the addition of security cameras is supplemental support to maintain the desired environment. However, along with being irrelevant, cameras project an oppressive atmosphere of scrutiny. The presence of constant monitoring may have an efficacy for capturing most illicit activity, yet it compromises the security of the students in an Orwellian fashion, hypocritically protecting the environment by destroying the personal security of students.

Yes, it does discourage those wishing to perform appalling activities, yet what of those who come to school with no other intention except learning and contributing to maintain a protected atmosphere?

They are subjected to the idea that there is mistrust between them and the school; you cannot individualize those considered offenders with a camera system within the entirety of the school.

These cameras provide the notion that every activity is monitored, that every expression is recorded. While schools do not utilize this footage to reprimand the right to free speech and all it encompasses, it still presents the same atmosphere of authority seeking forbidden activity from you.

Consider a newly established school with no reputation. Would you apply security cameras to replace your job of upholding a secure environment? That is essentially what security cameras are – a sacrifice of human interaction and trust.

They substitute the connection established by an instructor or a principal proclaiming their care for your safety, exhibiting the genuine emotion they have to ensure no student feels excluded or insecure. Cameras are only symbols for neglect, showing that the school cares little to promote security and are expecting that perpetual monitoring will perform with the same result.

Security cameras only make students feel as if they are being watched, and the divorce from human emotion only worsens the sensation. Imagine your house, the place where you should be as expressive as you desire, containing cameras that relentlessly survey you, with an ambiguous source seeking to report any prohibited activity you may do.

Students spend around six hours at school, and it serves as a secondary home for them, and the same connotation of scrutiny is translated to that environment.

Schools should abolish security cameras and pursue establishing security through embracing a welcoming environment, investing in groups designed to remove felonious activities and support those attempting to spread the influence of care within the school. It should also be observed that security cameras aren’t inexpensive, and the funds could go to more supportive systems within schools such as equipment and technology, an increase of literature, or improvements to student services in the school such as lockers.

Surveillance systems are not the solution to ensuring a secure educational environment, yet are a substitution for the trust established between the staff and the students, creating an atmosphere of scrutiny and an illustration of scarce care. If a school is truly operating under the commitment they swore to uphold, then there is no need to compromise the security of the student for the security of the school.