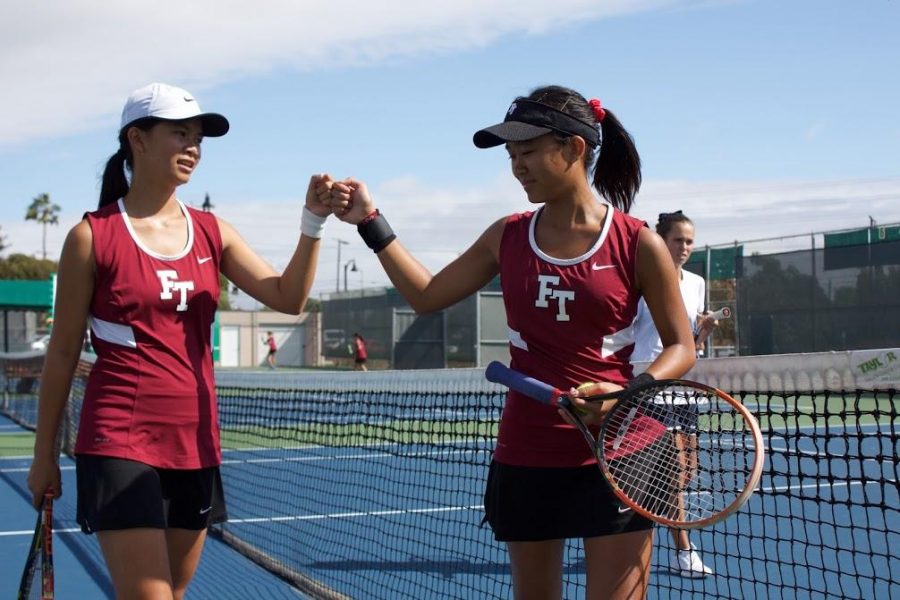 Freshman Erin Gaynor started off the afternoon with a “sweep” of her matches, winning all three sets. The first set, according to coach Brad McClain, was a “shutout” 6-0 win, and she went on to win the next two sets 6-2.

Gaynor was extremely satisfied with the way she played against the “tough competition.”

“I got off to a rusty start in the third set, but as I started to warm up I got increasingly better and I eventually won,” Gaynor said. “My biggest challenge today was myself. Ninety percent of tennis is mental and if you can make it past the mental roadblock, then you can do anything.”

Junior Laina Feath also won all three of her single sets with a score of 6-3 in the first set, 6-0 in the second and 6-1 in the third.

Sophomore Enkela Qoshlli had trouble in her second match against Villanova junior Pia Valtierra, but still was able to win her other two, taking a victory for the Dragons. She shut out Villanova junior Emily Mam in her third match 6-0.

On the flip side, sisters sophomore Sherlyn Khouvilay and junior Summer Khouvilay “swept” their doubles matches.

Summer Khouvilay thought that she and her sister remained concentrated throughout all three of their matches despite Villanova being a “tough team.”

“Villanova was consistent, but this is the best I’ve played,” Summer Khouvilay said. “I was really able to just go for my shots instead of holding back. What’s great about high school tennis is that you get to play so many different players and I can always try different techniques and that helps me improve a lot.”

“They [Villanova] are steady and consistent,” Stevens said. “Beyond that I believe our girls have the ability to pull off a win.”

McClain was pleased with how his team came out with a “strong start” and put pressure on Villanova.

“Today we went five and one in the first round,” McClain said. “I’ll take those kind of starts any day because it puts a lot of pressure on your opponents when they have to play catch up. We stuck to our game plan and I was very happy with the results.”

With his team still undefeated, McClain’s goal is to see his team in the playoffs this season.

“I always expect the girls to work hard,” McClain said. “My number one goal at this point is to make the playoffs. We made the playoffs last year and I will keep my fingers crossed because if we can keep this up I think we have a good chance at it for a second year in a row.”