“Patriot Day” is an inappropriate misnomer 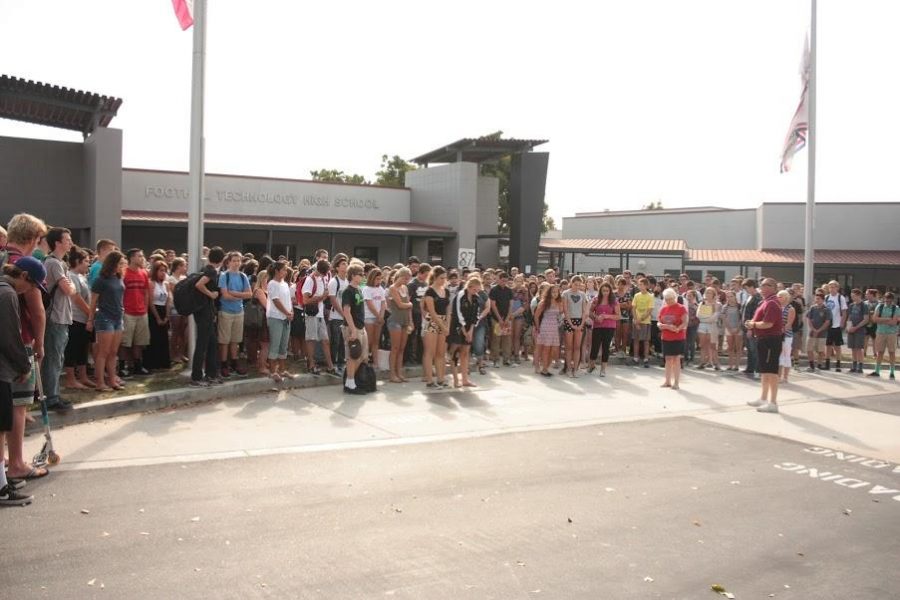 Students gathered outside the school on Friday, Sept. 11 to recite the Pledge of Allegiance. Credit: Grace Carey/The Foothill Dragon Press

Fourteen years ago, the United States experienced one of the worst terrorist attacks in its history. Three thousand people were killed when commercial airplanes were hijacked by terrorists and flown into the World Trade Center buildings and the Pentagon. A fourth plane was reclaimed by a brave group of heroes and crashed in an open field.

Fourteen years ago, the United States experienced one of the worst terrorist attacks in its history. Three thousand people were killed when commercial airplanes were hijacked by terrorists and flown into the World Trade Center buildings and the Pentagon. A fourth plane was reclaimed by a brave group of heroes and crashed in an open field.

Yesterday we remembered those whose lives were claimed in this attack, and our hearts go out to their loved ones.

As of Dec. 18, 2001, the date Sept. 11 was designated as “National Patriot Day” in remembrance of the lives that were taken and given in the attacks.

The events of Sept. 11, 2001 should not be forgotten, and many heroes rose from the flame and rubble on that day. Many brave men and women, firefighters, police officers and citizens alike gave their lives saving the lives of others.

Many men and women packed their suitcases that day without realizing they would never unpack them. Goodbyes were said as loved ones went off to work, thinking that they would see their spouses and children again in the evening.

And so the date of Sept. 11 has been designated “Patriot Day.” A day of remembrance.

However, is the naming of this day as “Patriot Day” really an accurate and respectful term? The word “patriot” has come to hold a negative connotation in many instances, and is not an appropriate term to use for unwitting citizens who had no knowledge that their lives would be taken.

The word “patriot” has taken on a completely different connotation when coupled with legislation such as the “Patriot Act” and Bill O’Reilly’s “Pinhead or Patriot” segment on The O’Reilly Factor. In many cases, the word has come to symbolize dogmatic doctrines and bigotry.

Should we allow even the chance for this connotation to be associated with the men and women whose lives were so cruelly taken?

Also, patriotism is generally associated with those who do something out of the ordinary for their country of their own free will. While this does apply to those who gave their lives for others that tragic day and risked life and limb to save others, the majority of the victims in the attack did not give their lives willingly, or of their own accord.

The majority of citizens who lost their lives were exactly that: citizens. Not military members, police officers or firefighters.

Had the citizens who lost their lives on that day been somehow able to discern that a disaster was about to occur, they would have taken all possible measures to avoid it. That is not to disregard the heroism of many people on that day, however, because love for a person’s family often outweighs all other priorities.

Patriot is not the correct word with which to honor the tragic loss of life on Sept. 11, 2001.

Students at Foothill Technology High School were requested to congregate at the flagpole and recite the Pledge of Allegiance in remembrance of the attacks. However, a simple moment of silence would be more appropriate.

The majority of citizens whose lives were claimed were not giving their lives in service of their country or some greater good, but rather were unwittingly killed by fanatics. Should these deaths be honored as “patriotic,” though it was not of their free will? It is neither sweet nor right to die, regardless of whether it is in service of one’s country.

The current generation of high school students are not old enough to remember the attack, and more education and context are necessary for teenagers and kids to appreciate the gravity of the event.

The attacks of Sept. 11 and the loss of life ought to honored not through reciting the Pledge of Allegiance but through a moment of silence, or prayer. This terrible day in history should not be called “Patriot Day,” but rather by a different word, more appropriate to remember those who were killed.