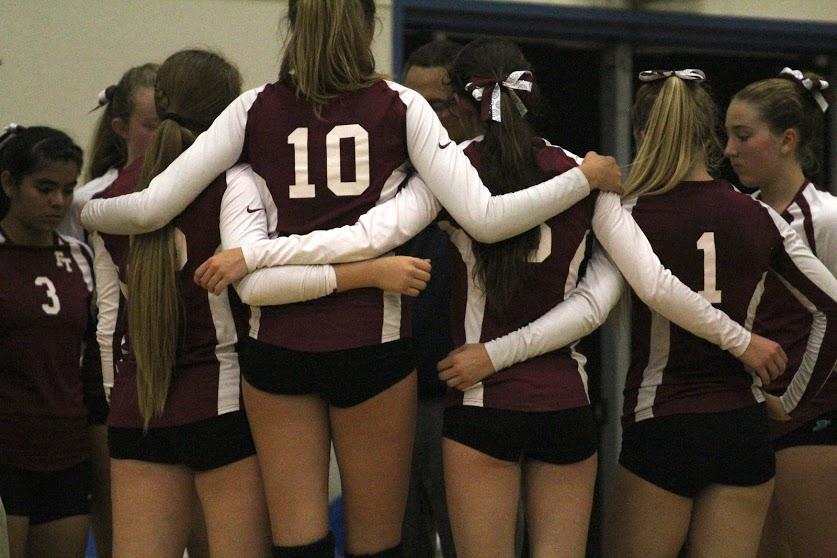 Foothill players and fans cheered on the girls’ volleyball team as they battled Providence High School in the first home game of the season. The Dragons lost 3-1.

Foothill players and fans cheered on the girls’ volleyball team as they battled Providence High School in the first home game of the season. The Dragons lost 3-1.

Sophomores Lily McCann and Alaina Hooks both noted that the junior varsity team needs to work on communicating with one another during the game. However, Hooks also noted that the team has improved on their serves and that she is excited for the rest of their season.

“I’m really excited for the season actually, I think that we can go really far with this team. I have high hopes for our team in general,” Hooks said.

The varsity team started behind, but after a timeout with the score at 3-6, sophomore Heather Ellison scored, giving the team a boost. Soon after, sophomore Morgan Gallagher was pulled out of the game after suffering a leg injury.

Coach Chip Tarleton believed that the team “compartmentalized it well. They stood up, somebody had to get in, and ‘next man up,’ as the saying goes. But they responded well to it.”

The game picked up as the teams battled back and forth. It was neck-and-neck, with Foothill coming up just two points short, with a score of 23-25 in the first set. The game continued as the girls conquered the second set 25-15. Providence bounced back to win the third set 17-25 and the fourth 15-25. Foothill ultimately lost with a final score of 3-1.

Tarleton thought that the team did well throughout the game but that they still need to improve on making fewer unforced errors and staying out of each other’s way.

“They played well in spurts but they […] still can’t get out of their own way. They are making a lot of what we call ‘unforced errors,’ which means that they are just little technical things that we work on every day that they are just not applying in the game,” Tarleton said. “And as soon as they fix those, they’ll be much happier.”

“I think it was a little bit of a roller coaster, you know they had some really high points and low. And the second game they won and they were on fire,” Stevens said.

Stevens was impressed with their winning streak in the second set and thinks “they can only go up.” She expects success from the team and hopes that the team can “keep that spirit up and not drop their heads.”

Junior and varsity player Aline Aguilar agreed with Stevens in that the team needs to keep their heads up.

“We should work on getting our confidence up and not getting or putting ourselves down,” Aguilar said.

Although Aguilar felt that her team’s confidence needs to grow, she was pleased with the way her team was “playing together, and passing the ball, doing three hits at a time, and getting it over [the net].”

Aguilar is excited for the season and is ready to “get out there and try to win.”