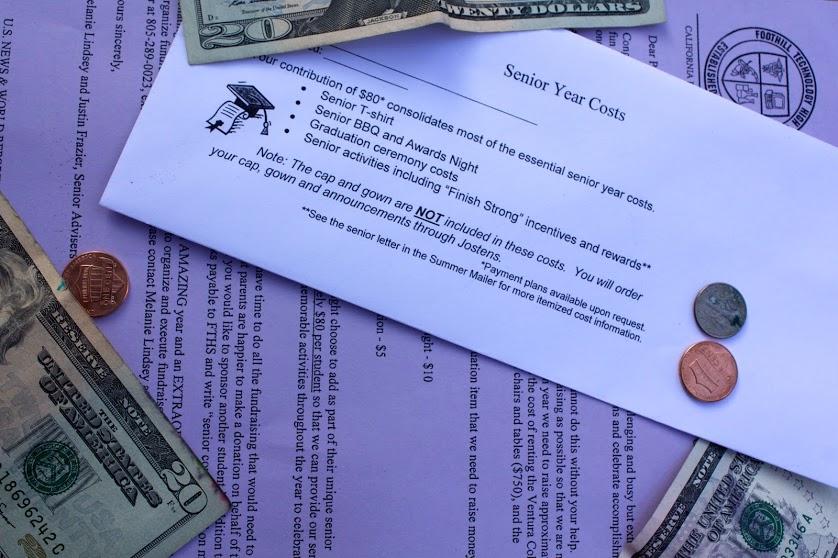 The lowest number of seniors in Foothill history contributed the $80 donation to ASB. Before the ACLU lawsuit and passage of AB 1575, ASB was able to charge a fee instead of ask for donations. Credit: Carrie Coonan/The Foothill Dragon Press

“The Senior Sunrise was a brand new event that we were going to put in. The goal was to bring the class together to have a senior breakfast and watch the sunrise together,” Associated Student Body (ASB) Advisor Melanie “Captain” Lindsey said.

“Then the Senior Barbeque would be the Senior Sunset which would be the final event of their senior year together, so it would bring their year full circle, but if we don’t have the money for it then we can’t do it.”

This year, 132 out of 240 seniors donated the recommended senior contribution of $80. Usually about 80 percent of the senior class donates the full $80, but 55 percent donated this year. Lindsey said that this low of a donation rate has never happened before.

The officers elected for each class raise money until their senior year by selling matchmakers, winter formal tickets and prom tickets. The amount raised is then put into an account for their class.

In addition, each senior is asked to make an $80 donation at the beginning of the year in order to add to the funds raised by ASB officers and reach the budgeted amount of $25,000.

Lindsey said that additional funds are usually raised throughout the year by students who choose to only buy the T-Shirt ($10) and the Senior Barbeque ($20), which ASB can charge for instead of asking for a donation.

After the donations at the beginning of the year, around $1,000 in additional donations usually comes in within the first couple weeks, but Lindsey said she cannot guarantee that will happen this year.

The Class of 2016 had $7,877.53 contributed by the ASB officers. Lindsey said this is about $1,000 less than what the ASB senior class officers usually raise, due to a greater cost for last year’s Winter Formal than usual.

Although there is about $1,000 less than usual from the ASB officers, Lindsey said the biggest problem is that the senior donations added up to a total of $10,565 of an expected $18,000.

Lindsey said that while financial problems could affect how many students can donate, she thinks it is more likely that it is due to the lawsuit against California filed by the American Civil Liberties Union (ACLU) in 2010 to ensure that public school is free for students.

The lawsuit was followed by the passage of Assembly Bill 1575 in 2012, which restricted schools from charging fees by implementing a new complaint process, beginning Jan. 1, 2013.

However, ASB hasn’t been able to ask for a senior fee for the last five years because Ventura Unified began making changes to be sure the district wasn’t named in the lawsuit.

“Since the ACLU I think people feel a lot less inclined to do anything. We have a definite attitude change with ‘Well, I don’t have to donate anything,’” Lindsey said.

“It used to be a senior fee, but now we are no longer allowed to call it a fee, so we have turned it into a donation. We have seen a decline in the amount of donations made since that happened.”

The deficit in the senior funds is going to result in a cut of several events, Lindsey said. She said the first thing that might go is the confetti at graduation, which costs approximately $1,000.

ASB will be holding a meeting tomorrow, Tuesday, Aug. 25, in D-108 where seniors can provide input on what they would like to cut with the class officers and Lindsey.

Lindsey has posted the senior budget on the Class of 2016 Edmodo group. Seniors are still able to donate to the fund.

Senior Nathalie Hendrix expressed her thoughts on why there was a decline in donations.

“I think this happened after all the fiasco of ‘Oh, we shouldn’t need to make donations, the school needs to pay everything,’ so parents start to feel like they don’t need to go and help contribute for all these extra activities,” Hendrix said.

Senior Ameet Rahane said that many students and families might not have the financial means to make a donation.

“A lot of people can’t afford it… and a lot of people have other places to spend that money, like for some people they have family they need to send money to or they have siblings in national sports or something,” Rahane said.

Lindsey said that usually, ASB has the means to pay for senior class events, even if some students cannot pay due to financial reasons.

“We’ve never ever turned a kid away. There’s only two things that we’re allowed to charge for in the senior class: $10 for the senior t-shirt and $20 for the barbeque at the end of the year. That’s 30 of the $80. Everything else we’ve always managed to figure out.”

“But that was when we didn’t have seven and a half thousand dollars less than what we need.”

“They need to donate, there’s nothing else we [ASB] can do… I spent last year planning prom raising money for the senior class,” she said. “So I don’t think there is a lot that we [ASB] can do – it’s what the rest of the class can do – and if they want these events then they’ll have to donate.”

Fidelity Ballmer contributed to the reporting of this article