Class of 2015 turns the tassels at graduation (59 photos, video) 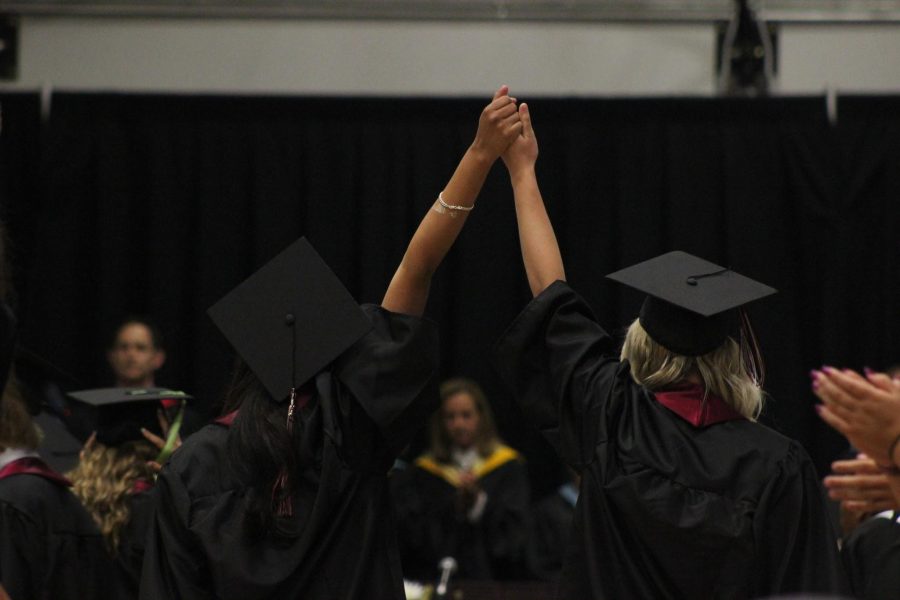 Family members, friends, teachers and staff entered Ventura College on Thursday to watch the Class of 2015 graduate from Foothill after four years of high school. The administration and teachers walked in first, as well as the Dragon Honor Court, a group of juniors who help run the senior activities and graduation.

Family members, friends, teachers and staff entered Ventura College on Thursday to watch the Class of 2015 graduate from Foothill after four years of high school.

The administration and teachers walked in first, as well as the Dragon Honor Court, a group of juniors who help run the senior activities and graduation.

“We are a class of divergent opinions […],” Hammer said in his opening speech. “But it’s that passion that makes this class so special. We all have tenacity, ambition, drive and spunk, and I know that every single one of us will go farther than we ever dreamed possible because of these traits.”

“We may of not always been the most cohesive class, but there’s most definitely one thing that we’re all united in, and that’s the desire to just get out of here,” he said, emitting laughter from the crowd.

Hammer then introduced the “League of Inspirational Heroes,” a program that “recognizes teachers, coaches, family members and other mentors who have made an indelible mark on these graduates’ lives.”

Each of the honorees were chosen by a graduate and were invited “to share in the celebration of the accomplishments that they helped mold.”

Principal Joe Bova then shared some of the accomplishments of the Class of 2015 with the audience.

Ninety-eight percent of the senior class will be attending a university, college or community college. These students stood and were recognized, as well as students taking gap years for internships or missionary work.

Bova also said that according to US News, Foothill is in the 1 percent of the 31,000 high schools in America, and the 77th in the nation according to Newsweek.

Students then stood and were recognized for their various accomplishments and extracurricular activities including the National Honors Society (NHS), the California Scholarship Federation (CSF), the National Forensics League (NFL), the BioScience Academy, the Foothill Intervention, Reinforcement and Enrichment (FIRE) program, the multilingual seal, the Foothill Dragon Press, Foothill sports and others.

Twenty-students had the Platinum community service award with over 225 hours spent serving their community, contributing 8,000 hours as a group.

Seniors reflect on their years of high school. Click the circles to hear their final thoughts on what graduation and their experiences or struggles at Foothill have meant to them:

Valedictorian Jameson Mah then performed a speech and rap called “Looking Back, Looking Ahead.”

After the applause for Mah’s rap, seniors crossed the stage to receive their diplomas as campus supervisor Dana Eaton and counselor Debbie Freeman announced their names. Students shook Trudy Arriaga’s hand as well as other teachers and officials.

Hammer then introduced the senior gift, a “token of our appreciation for this school.”

The senior class bought stoles for future classes to use.

“To the class of 2016 onwards, these stoles were really expensive so don’t mess them up please,” Hammer joked.

Before the annual turning of the tassels, Bova introduced Superintendent Trudy Arriaga and said that she would be retiring in three weeks.

After 35 years of service, Arriaga gave the class of 2015 advice for their future, reminding them of the love that they are surrounded by and the home that they will always have in Ventura.

Arriaga has been in her position since 2001, but started as a kindergarten teacher at Will Rogers. She pointed out that students James Florez and Marco Tadeo were in her class and now conclude their high school career along with hers.

With that, she announced that they had fulfilled their graduation requirements and invited them to turn their tassels.

As they shifted the string from right to left, the confetti cannons exploded. Streamers and graduations hats filled the air as the young adults embraced each other and the future that is now ahead of them.

The new high school graduates then concluded the ceremony by hugging their teachers that waited for them in the middle aisle.

Some seniors shared what graduation meant to them.

“Graduation today for me is honestly overcoming such a huge barrier in my life,” senior Lindsey Wyllie said.

“For my personal story, freshman year I was a truant at Ventura High School and I did three years of school my junior year, and then to come to Foothill my senior year and be able to walk such an awesome class and just actually graduate high school at an elite school, it feels awesome.”

“I felt like I had a lot of temporary friends but now I have some that will stay with me the whole way. I actually met someone who goes to this school that didn’t make it to graduation today, her name is Bailey Greenslit, and that was helpful for me,” Bangs said.

“That was kind of my biggest struggle I guess, how you socially interact because you are becoming an adult.”

Senior Joel Sobonya said that graduation meant a lot to him because he had overcome a lot throughout high school.

“Throughout my previous years I’ve done pretty bad, so all throughout junior year and the beginning of senior year, I was busy making up a ton of credits, but I achieved my goal and now I’m graduating,” he said.

Another senior, Lucas Gomez, said that he had to overcome feeling threatened by his teachers.

“My biggest struggle was really talking to teachers. I was always really hesitant to talk to them; I always felt that they were more authority figures rather than people that are there to help you and teach you and make you learn,” he said.

Gomez said that by the end of high school, he had overcome this fear.
“I felt more connected to the teachers and I listened to them more. To see them help out students was really beautiful to see,” he said.

Other seniors, such as David Whitcomb, recognized the freedom they now had after graduating.

“For me I feel like graduation is a big step from high school into the real world. I kind of realized a couple days ago that we have more freedom from this point,” Whitcomb said.

“From this point, it’s kind of like, ‘Oh hey! Go do what you want!’ and it’s kind of a weird freedom we’ve never had before. To be able to experience is really weird, but at the same time, really liberating.”