The Foothill Dragon Press • May 30, 2015 • https://foothilldragonpress.org/28837/arts-and-entertainment/events/festival-of-fools-successfully-encourages-laughter-for-a-fifth-year/ 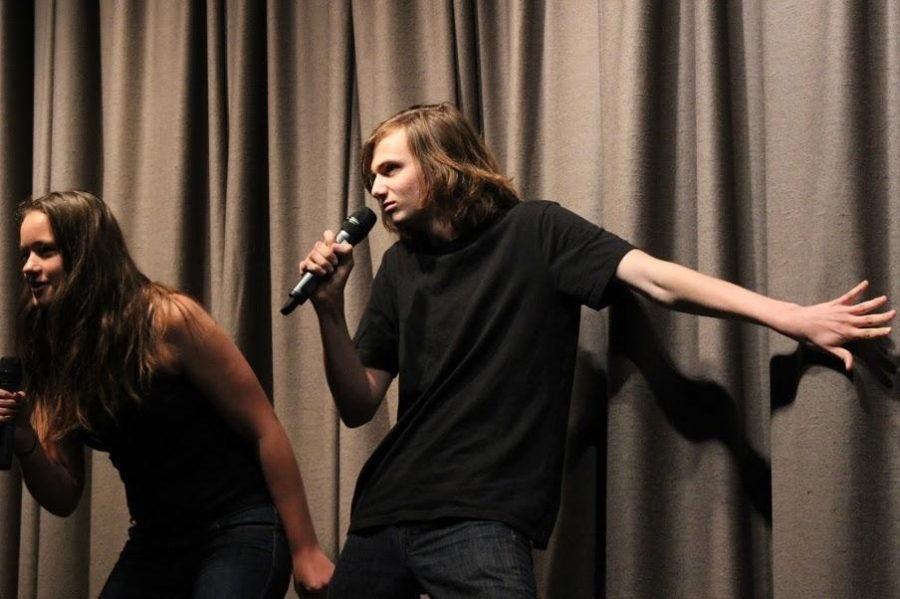 The lights were turned off at about five minutes past seven and the crowd immediately fell silent, anticipating what would happen next. Not knowing what to expect, they were greeted by two enthusiastic hosts who were ready for the festival to begin.

The lights were turned off at about five minutes past seven and the crowd immediately fell silent, anticipating what would happen next. Not knowing what to expect, they were greeted by two enthusiastic hosts who were ready for the festival to begin.

Some of Foothill’s very own comedians graced the stage in Spirito Hall this Friday evening as members of the Speech and Debate team and event coordinator Jennifer Kindred’s speech class proudly produced their fifth “Festival of Fools” comedy show.

The festival was hosted by seniors Alexia Khodanian and Ben Limpich, who are both accomplished members of the Speech and Debate team.

Their cheesy interruptions throughout the show added to the humor of this event, while also highlighting the participants’ knack for well thought out humor.

“I feel like this is a group production and I like being a facilitator to promote the comedy that others have to offer. For me personally, it’s more rewarding to introduce and promote the others and make it more about them,” Khodanian said.

This comedic event also doubles as a fundraiser for the Speech and Debate team.

Kindred proudly announced that the funds raised from this year’s “Festival of Fools” is going towards next year’s trip to UC Berkeley, which was a pleasant surprise to many of next year’s members.

The acts ranged from original hilarity to spin offs of well known comedic skits like “Tangled,” and “Cooking with Sarah Palin.”

Another act was as an interpretation of the poem “Death of a Toad” by Richard Wilbur, which is a favorite among this year’s Advanced Placement Literature students.

The work that went into this event involved a lot of experimentation with different comedic techniques.

Kindred expressed her love of teaching and comedy, as well as how she has successfully paired the two together.

“The fact that I get to spend an entire quarter with an entire forty people making me laugh everyday makes it really fun to come to work,” Kindred said.

She said she has her students participate in a series of trial and error when looking for a new routine by having them perform it in front of the class.

This allows these students to figure out what does and doesn’t work before presenting in front of a live audience.

One of Kindred’s graduating students, Kiley Becker, described this process as being more of a spontaneous one.

“What Kindred does is she doesn’t really tell us that we’re going to be doing stand up comedy or a comedy night, she just gives us a topic and then we nominate the funniest stories,” Becker said.

Laughter could be heard from the start of this festival to its finish and some of the funniest acts evolved from original stories.

Senior Ethan Tan commented on how a lot of the acts revolved around real life situations and how he enjoyed their dramatized versions.

For example, Becker told the story of how she accidentally ordered a Chuck E Cheese party to Spanish teacher Adrian Sanchez’s email.

Junior Hartung-Dallas talked about how her mother sent a note to the school giving her permission to carry pepper spray on campus.

Both of these situations ended in hilarity and turned into great stories.

Another favorite story were from sophomore Yume Dorsey, who used several drawings to tell the story of how a pencil hit her in the eye when she was little, and junior Blake McAlister, who talked about his fear of balloons.

At the end of the night, senior Bailey Greenslit pretended she was an imposter and took over the show, performing “Microphone Performance Art.”

The act included pushing the buttons of a toy into the microphone, whispering and breathing loudly, putting on deodorant and asking quietly about the temperature of the room.

Limpich and Khodanian chased her away and took back the show, and then thanked everyone for coming to close the evening.

Although this event lasted for only one night, the audience definitely enjoyed themselves.

The presence of laughter could definitely be felt throughout this year’s “Festival of Fools” due to the highly energetic performances and audience participation, which will carry on for years to come as the talent of these Foothill students continues to entertain.