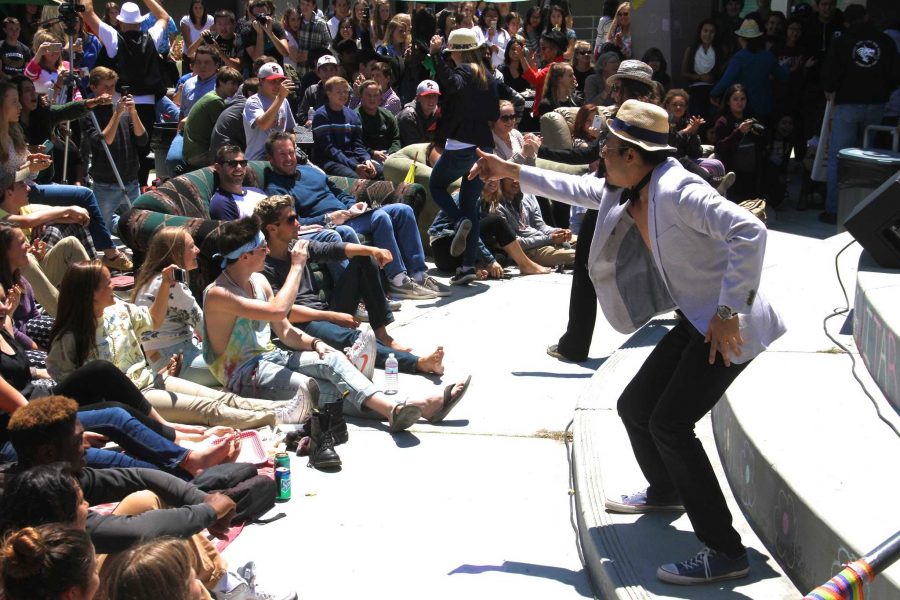 Couches were scattered across the quad and music streamed through the school as sunlight escaped from the clouds for Foothill’s annual Air Guitar. Tie-dye banners hung amidst chalk designs on stage, while students wearing flower crowns and flared bell bottoms swarmed, sending Foothill back in time to the 70s.

Couches were scattered across the quad and music streamed through the school as sunlight escaped from the clouds for Foothill’s annual Air Guitar. Tie-dye banners hung amidst chalk designs on stage, while students wearing flower crowns and flared bell bottoms swarmed, sending Foothill back in time to the 1970s.

Unlike any year before, food trucks lined up in the back parking lot, offering a variety of foods from burgers to nutritional smoothies. Students and teachers alike followed the delicious scent before and during the show.

Opening the show was senior Noah Tritschler and his band. They performed two songs that made the crowd roar.

Following their songs, principal Joe Bova introduced the annual Tanner Aubert Award. Every year, a hardworking freshman is chosen who shows determination with a great spirit, despite some challenges they may face. Freshman Savannah Toleto was honored this year.

Then came two singing performances. Seniors Morgan Castro and Brittany Richardson did a duet to the song “Treasure” by Bruno Mars, followed by another duet by seniors Sasha Poirier and Claire Beck, who performed the song “Soon We’ll Be Found” by Sia.

The third place winning act was next. Senior Summer Dosch and freshman Ethan Ambler were definitely a crowd pleaser with their hip hop and contemporary style of dance. With a mashup of songs, they combined their skills to create unique style.

Sophomore Brianna Corbett then gave a riveting performance of the song “Bright” by Echosmith while she played the guitar. She moved the crowd, causing some students to wave their arms into the air.

A clever and comedic performance caused the crowd to laugh thanks to senior Jason Borrajo. Before giving his performance, he explained that he only knew how to play the song “Don’t Stop Believin’” by Journey on piano, but refused to sing it.

The first place winner, junior Ashley Amaladhas, was up next. She played “Bohemian Rhapsody” by Queen on the violin while the crowd sang along.

“It was really fun for me, to be up there hearing people singing along. This year was my favorite because of the spirit I felt when everyone was a part of the performance, that was very rewarding,” Amaladhas said.

“NASKAR,” seniors Evan Askar and Nick Vaughan, then surprised everyone with “Foothill’s national anthem.” They sang a parody of “Wiggle” by Jason Derulo while dressed in umbrella hats. Askar also wore a coat that said “Fear the D” on the back.

Florez thought that Askar and Vaughan gave the best performance.

“I think Nick and Evan definitely blew it away with their Foothill song,” he said.

Other singing performances of the day were juniors Corinn Conant and Nicole Rockholt. They won second place with an original song by Conant.

Then came junior Rachel Howery, senior Jeanine Schultz and senior Ariana Vivian, all portraying their own unique style with every song, followed by Jasmine Basilan dancing.

“I saw a lot of familiar faces as I looked at the crowd, the whole time my heart was beating so fast. It was a great feeling being able to see my friends’ faces smiling. It was fun,” Howery said.

The final performance was an all time favorite. A few teachers danced and lip synced to the song “Uptown Funk.”

“I thought the talent was better than any years past. There were some super strong performers this year. Usually there are a couple where you go ‘oh jeez,’ but there weren’t any this year,” Frazier said.

Senior and co-MC of the event James Florez agreed.

“We definitely have a smaller school so we have a smaller [talent] pool to choose from. But I think we really do great. This year was very talented,” he said.

Sophomore Alysa Elliott thought that the final performance was the most entertaining.

“I liked the last performance, the one with the teachers. It was funny to see my teachers going up there and doing that,” she said.

After the show, students and teachers reflected on the impact Air Guitar has on the school every year.

“This is definitely my favorite event of the entire year- probably my favorite day of school. It’s such a great thing for the whole school to come together and have an enjoyable day on campus,” Florez said.

“If you think about it, we’re all sitting outside. There is no real security, everyone is just enjoying themselves, including the teachers,” Frazier said.

“I think that is unique to Foothill- we are all together as a community,” Frazier said.