The Foothill Dragon Press • May 3, 2015 • https://foothilldragonpress.org/28187/news/annual-art-show-celebrates-high-school-talent/ 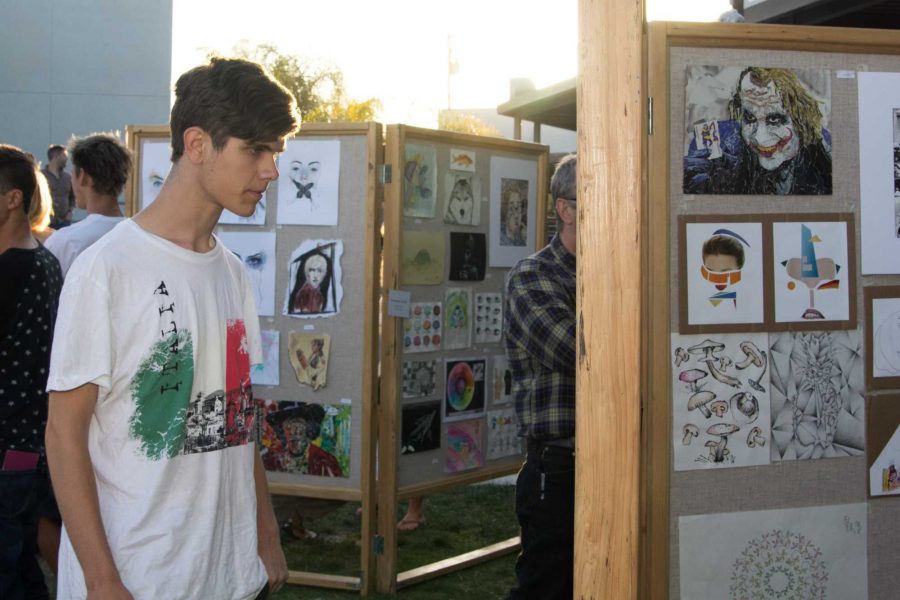 Creativity flourished Friday evening as a handful of talented art students’ work was displayed during Foothill’s annual art exhibition. The event has been going on for five years and was originally designed to recognize students and their artwork, as well as be a fun way to fundraise for the school.

The event has been going on for five years and was originally designed to recognize students and their artwork, as well as be a fun way to fundraise for the school.

Foothill’s art show had a start time of 5 p.m., but many of the spectators did not arrive until after 6 p.m. and stayed until the 8 p.m. close time.

During this time there were various musical performances that kept the audience entertained.

Live music was also performed on the stage by Foothill students.

This year’s art show consisted of vibrant drawings, paintings and chalk posters that were laid around the quad area.

Along with these varied pieces were photographs that were selected by Foothill’s photography teacher, Cameron Crouch.

Junior Brandon Jacobson, who is in Crouch’s AP photography class, has been in photography at Foothill since ninth grade.

He said he enjoyed his first year proudly exhibiting his work, which he had up for purchase.

Gustafson was excited to finally see her photos on display.

Her photos were not for sale, but she received many compliments.

In attendance was history teacher Dan Fitz-Patrick, who said he enjoyed the show, particularly the photography.

“I’m always impressed by the talent and work the Foothill students produce. The photos are some of my favorite, but I see some really good art as well,” Fitz-Patrick said.

There was also Mexican cuisine served towards the back of the displays, which included a taco plate served with rice and beans.

Especially excited about the food was art teacher and show coordinator, Justin Frazier.

“Each year [the show] gets bigger and bigger… now we have tacos, everyone likes tacos,” he said.

Foothill’s annual art show began in 2007, and with Frazier’s dedication, he was able to turn a once “tiny” after school affair into a “big event,” he said.

“I’m really impressed and proud of the students,” Frazier said. “I wouldn’t say I have a favorite piece; a lot stand out.”

Many Foothill art students were excited to display their work.

Junior and second time art show participant Alex Fern proudly displayed six pieces, one of which was for sale and received an offer.

She is taking art at Foothill for her third year now, and said she has been artistic since kindergarten.

Fern has an undeniable passion for creativity, and hopes to pursue it by going to a college focused on art.

Foothill students also showed large diversity in the types of artwork they were displaying.

Not only were photos, drawings, and paintings for sale, but also Vans shoes that were painted by students were up for auction.

The shoes had originally been created by the AP Art students for a Vans contest, but were being sold in the silent auction to support the art program.

There was a “Swan Lake” themed cake made by Culinary Club President Madeleine George.

George considered her two tier, fondant decorated, butter cream frosted cake to be art as well, and decided to donate it to the fundraiser.

Foothill’s art show has celebrated another year of success. Many members of the community came out to celebrate these artists and showed their support.