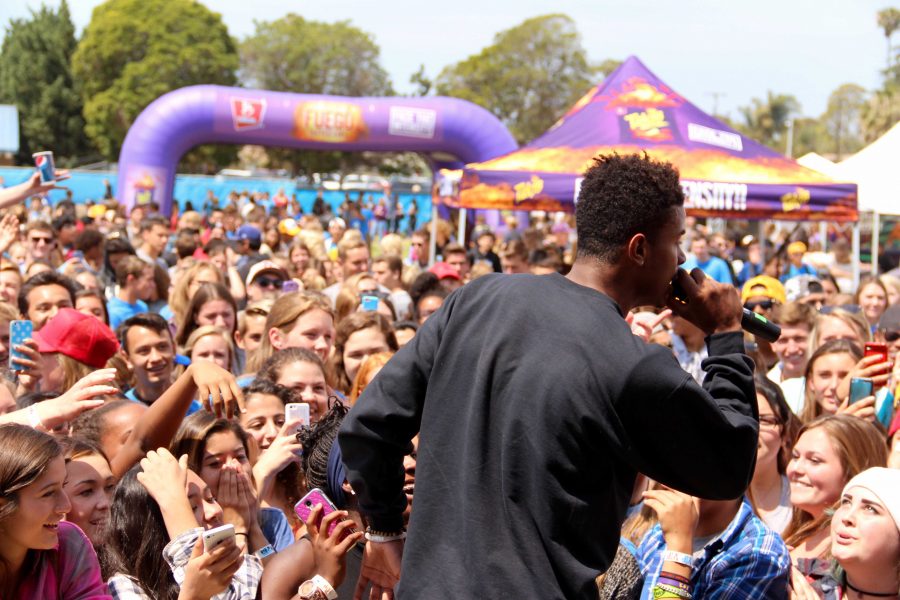 As students from three different schools flooded into Buena’s baseball field on Thursday morning, a tangible anticipation buzzed throughout the crowd. No one knew exactly what to expect from the new form of Renaissance Rally put on by High School Nation, but they seemed ready to find out.

When a Foothill senior contacted High School Nation earlier in the school year, the organization gladly agreed to bring a performance to Ventura. The senior informed ASB advisor Melanie “Captain” Lindsey of this information, and they chose Buena High School as the location. For this reason, Buena, Foothill, and some El Camino students attended the rally.

ASB President Evan Askar knew many students were apprehensive about the new type of rally, but thought they were going in with the wrong mindset.

“They should try to embrace what’s going on. It’s really fun if you have an open mind to it,” Askar said.

High School Nation is a traveling festival that supports the arts in public schools. Founder Jimmy Cantillon was never very artistically talented himself, but loved being around the arts. From this dilemma stemmed the organization High School Nation.

A Q&A session was held with the bands before the performances. In an auditorium full of Foothill students, DJ Unique, the announcer of the day, asked for “questions to help you further your career.”

While some questions were not serious, many students asked legitimate questions that provoked heartfelt responses from the performers regarding how to start a career in the arts and be successful at it.

Sophomore Gracelyn De La Cruz’s perspective of the entire event was changed by this Q&A session.

“I did have some doubts coming in, but the Q&A made it so much better,” she said.

Reassured by this session, Foothill students headed over to the baseball field. Once inside a circle of tents where the event was to take place, students were greeted by the energetic DJ Unique who hyped the crowd up for the first musical act, Palaye Royale.

Palaye Royale is a rock band whose members take pride in their songwriting. They were the first band ever to win an MTV award while still unsigned to a record label. Drummer Emerson Barrett stressed the importance and authenticity of writing your own lyrics, something the band is very proud that they do.

Another performer, Kaya Stewart, was insistent that writing your own lyrics aids in success. A high school student herself, Stewart knows that producing her own lyrics will be imperative to her career.

The New Officials, a band who have toured with Demi Lovato, were a large hit with the crowd. Their indie-pop style brought many people up front to the stage. Lead singer Gabrielle Symons expressed her gratitude to be working with High School Nation.

“Its a blessing to be able to reach out to the exact demographic that can really change the world, and we hope our music can really empower kids,” Symons said.

Following The New Officials was fifteen-year-old Stewart, singer and actor Chris Bones, and finally the two heart-throbs of the event. Originating from Spain, pop singer Leroy Sanchez had many girls swooning and rushing to the stage. Likewise, rap singer and former Disney Star Trevor Jackson was a hit.

Many students stayed after the event had ended to snag selfies, get autographs, and even purchase the performers’ merchandise.

Since there was a wide range of music styles presented, from rock to indie to rap, there was something to please everyone. Six performances took place during the entirety of the concert.

Foothill senior Tomas Snyder was grateful for this diversity of music.

“I thought it would be all pop music, but I guess there’s going to be rock. I like rock,” Snyder said.

This musical diversity made the concert more enjoyable for many students.

For students who were less interested in the concert aspect of the event, there were a plethora of booths to visit. Aside from the booths selling artist merchandise, there were many interactive art-based booths.

Tilly’s provided locations for students to design their own hats and t-shirts. Additionally, they offered a sweepstakes to win a one hundred dollar Tilly’s gift card and a pair of sunglasses to everyone who entered to win.

Paul Mitchell, a beauty school in Santa Barbara, had a booth where students could get their hair styled by students. Additionally, the school was giving away a one thousand dollar scholarship to a senior who entered to win.

The Tulip Art Zone allowed students to draw and paint all over the walls, and to design shoes on a piece of paper. The top five designs submitted will be designed into actual shoes.

Both the New York Film Academy and Sony Media Zone provided areas for students to experiment with cameras, and even practice using a green screen.

The Guitar Center Music Zone was an area for students to try out a variety of musical instruments. They gave away prizes of a guitar and a keyboard.

The interactive and art-based aesthetic of the rally was completely new for students from all three schools, garnering a variety of reactions, but junior and ASB Renaissance rally assistant Haley Gustafson believed everything ran smoothly.

Cantillon is excited to see what High School Nation does for the current generation, and the impact they will have.

“I think that the real impact that you’ll feel from High School Nation won’t actually be felt for another ten years when all the students we’ve been meeting graduate, get through college, or start careers,” he said. “We sort of see who develops into these stars in music, and art, and media. And that’s what I think probably I’m going to be the most proud of.”

Gabby Sones contributed to the reporting of this article