The Foothill Dragon Press • May 25, 2022 • https://foothilldragonpress.org/276674/a-latest/inside-with-m-l-f-foothill-techs-rockstar-teachers/ 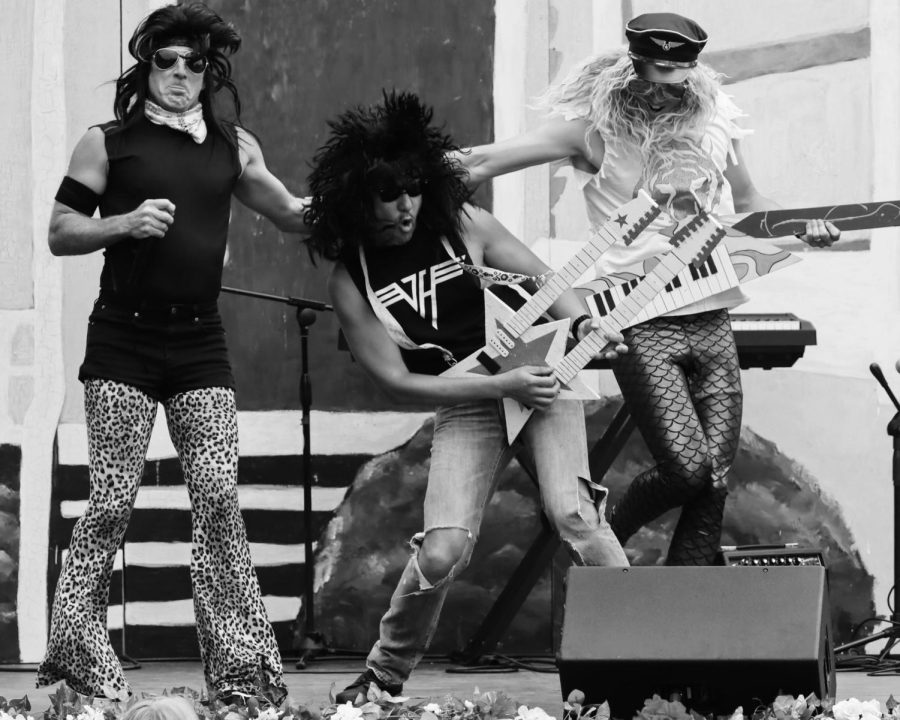 Fitz, Li and Miller fall further into their Rockstar personas as the interview went on in Miller’s classroom during lunch, bickering over whether or not they could open for Harry Styles and finally settling on Harry Styles opening for them.

To start, I ask M.L.F. what kind of Glam Metal they were into in the 1980s. Miller shoots back immediately, asking if I think he’s that old. The room erupts into laughter as I clarify, “I don’t think you’re old. He is,” I say, gesturing to Fitz, who smiles and takes the opportunity to answer the question.

The band covered “Kickstart My Heart” by Motley Crue and “Panama” by Van Halen this year at Air Guitar. I try to get an answer from Miller again, this time asking what kind of Glam Metal he likes, even if he may have not been there to see the movement.

ETTEDGUI-SCOTT: So you weren’t a baby listening to Glam Metal.

MILLER: I was definitely not a baby listening to that stuff. No, I’m just the confused millennial who’s along for the ride. These are the guys who are driving the motorcycle, so to speak. They bring me along and I just do *that* with my head.

Miller bangs his head up and down a couple times for good measure. It’s strange to see him do that without the wig.

M.L.F. is taken aback by my mispronunciation, but can’t seem to hold back their laughter as they reaffirm that their name is Miller-Li-Fitz.

LI: No, no, no. We are M. L. F. That’s what we are. It’s a coincidence that it pronunciates like that. People love that, taking acronyms and doing that with them.

FITZ: Miller, Li and Fitz. Straight up, that’s our name. We have that period at the end of each, that’s an abbreviation.

I’m careful to get the name right this time. Li explains that Fitz put the band together four years earlier and Miller adds that, at the time, the three taught similar courses, so they were often together to plan out the curriculum.

They keep calling their 2022 performance their “reunion tour.” I inquire further, wondering if this was a reunion tour because COVID kept them from touring, or because M.L.F. broke up.

FITZ: COVID broke us up…but we decided to hit the road again in 2022. What, four years since we last performed on our stadium tour? We came back for it all.

When I ask them if M.L.F has performed anywhere else, Fitz explains that they’re looking into a stadium tour of North America, and then to Europe, where they hope to open for David Hasselhoff.

MILLER: Or Knight Rider, either one.

We get into a conversation about the creative differences that have strained the bonds of M.L.F. For the band, a major problem seems to be tights—at Air Guitar, all members but Li wore tights.

MILLER: The big thing for us, the big disagreement is the tights, if we should wear tights or not. I always default to more tights.

FITZ: We were upset with Li on that one.

It’s true: at Air Guitar 2022, Fitz wore leopard print flares (with black jean shorts on top) and Miller sported shiny green leggings. Li, on the other hand, wore ripped skinny jeans. Fitz pulls the group back together, remarking that no matter what M.L.F. fights about, they “work it out through just rocking out.”

FITZ: I couldn’t have done any of it without these two on my side right there, and we’re intertwined.