The Foothill Dragon Press • May 9, 2022 • https://foothilldragonpress.org/276546/a-latest/opinion-re-imagining-the-holocaust-curriculum-as-a-solution-to-contemporary-antisemitism/

Opinion: Re-imagining the Holocaust curriculum as a solution to contemporary antisemitism 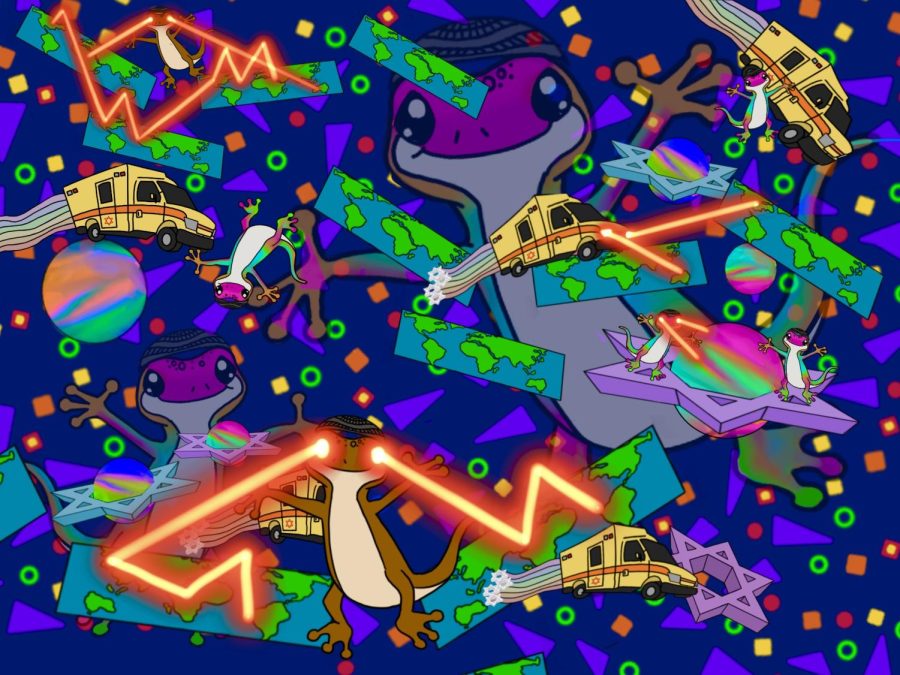 The Universe, as Congresswoman Marjorie Taylor Greene sees it. Lenny the Jewish Space Lizard shoots lasers out of his eyes as he terrorizes the Earth.

Teachers have the unique ability to impact the prejudices of an entire generation by the way that they teach history. By refining how they teach about the Holocaust within units dedicated to human rights and/or World War 2 (WW2), teachers have an unparalleled opportunity to refine the way that the education system frames the Jewish people and diminish contemporary antisemitism in the west.

So as WW2 fades out of public consciousness, there’s no nationalistic reason to keep American antisemitism tied to the mast. And it’s not that America isn’t steadily plugging along towards a more liberal future, it’s that American Jews don’t fit into the “social justice” mold.

Suddenly, the only thing keeping antisemitism at bay is a sort of knee-jerk reaction to WW2 slipping further into time—a sort of perversion of Holocaust remembrance: “Never forget that the Jews were once oppressed so society should give them the same concern and attention given to other vulnerable groups.”

Burgeoning antisemites can’t be “scared straight” by the gory details of the Holocaust. Especially when most of the time, teachers manage to get through the entire unit without discussing who the Jews actually are.

The idea of teaching Jewish identity alongside the Holocaust is easily misconstrued—it’s not a matter of identity politics or theology, it’s about the very nature of antisemitism. Most forms of antisemitism work by changing the narrative around who the Jews are.

The biggest mistake when teaching about the Holocaust is letting the Jews exist as an ambiguous people; it opens the door for libel and makes it easier for leaders like Marjorie Taylor Greene to convince people that the Jews are lizard people building a space laser to give everyone Havana Syndrome.

As long as fearmongers can define and redefine at will what Jews are, contemporary antisemitism is going to exist. A simple shift in the way schools teach about the Holocaust could tamper antisemitism in an entire rising generation. Here are three things to address in the Holocaust curriculum:

Explain that the Jews were alien to Europe.

It is crucial to Holocaust education to understand the fundamentally xenophobic nature of European antisemitism. Additionally, framing the Holocaust as persecution onto a Middle Eastern faction sojourning in Europe after repeated expulsions from the Levant highlights the most crucial fact of Jewish history: the diaspora. (And leave the Israeli-Palestinian conflict out of it.)

Establish Judaism as an ethno-religion. Expand your understanding of race.

While the Holocaust was based on the manufactured idea of the Jewish race it’s important for students to understand that Judaism is an ethnicity in addition to a religion—and how European Jews could be white in America, but not white in Nazi Germany. Not only does this further discredit the entire institution of race, it crystallizes “who” the Jews are.

Make connections to other pogroms throughout the world.

A major flaw of Holocaust education is the Eurocentric narrative it perpetuates of the Jews: as a European people or a people resigning solely in Europe. It’s impossible to teach about antisemitism without acknowledging it on a global scale, specifically in Asia and Africa where the Jewish populations are overlooked.

So when teaching about the massacres at Babi Yar, teachers should make connections to the Fez massacre in Morocco, the Farhud in Iraq, the pogrom during the Ethiopian revolution and how frequently synagogues are burnt down in Nigeria.

The Jews are so easily scapegoated because of the inherent sense of mystery that follows them around the world. But a multifaceted view of the Holocaust as a major pogrom onto one sector of an ethnic community spread out all over the globe dispels the ambiguity, making it much harder for antisemitism to take root.