Blast from the past: Seniors take a trip down memory lane at Senior Recess 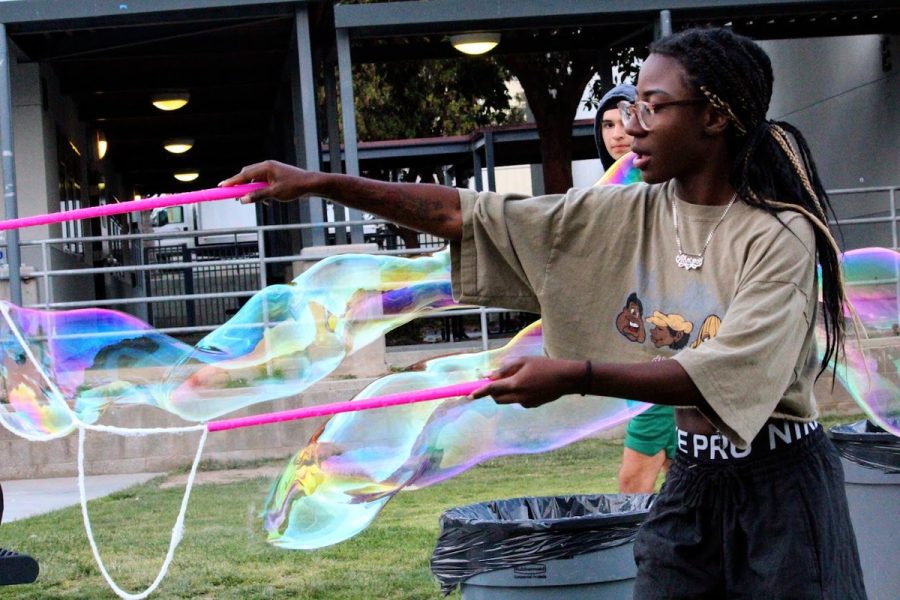 Playing with bubbles was a popular pastime for many of the attendees, it allowed for many students to reminisce about earlier school years.

Hopscotch, bubbles, four-square and other typical elementary school games were set out for eager Class of ‘22 while 2000s music wafted throughout the quad, filling the air with a nostalgic feel.

When the clock struck 6:00 p.m. on April 21, seniors rather than children, gradually streamed into the quad, scattering to relive childhood memories.

The Associated Student Body (ASB) organized an event, Senior Recess, based on the typical recess students enjoyed before the playground-less middle and high school.

“After the pandemic restrictions, we just wanted people to have fun,” Athina Ananias ’22 expressed, “seeing people come together and participate in events like Senior Recess can be so simple, but so effective.”

On the stage, various snacks and drinks were set out for the students to enjoy. With Lunchables and Go-Gurts, Caprisuns and Nesquik Chocolate Milk, the quad quickly transformed into a elementary lunchroom-lookalike.

Just down the stairs, a four-square game was set up, which was quickly filled with competitive seniors who sent balls flying across the quad, leaving others to hurriedly duck and yelp.

On the tables, drawing books, playdough and slime were laid out for them to enjoy, but the rope bubble wands quite swiftly became the favorite.

On the walkway, a game of The Floor Is Lava was drawn with chalk, followed by hopscotch. On the other side of the quad, a Twister-themed jolly jumper was set up. Laughter and grunts of effort emanated from it as the players attempted to contort themselves without falling.

Friends reminisced about their academic journeys and discussed graduation. They shared post-school plans and dreams, expressing how bittersweet it felt that the year was coming to an end.

Supisara Supsakijanan ’22 commented on what senior events can do, “It really helps you bond with your classmates before everyone departs to whatever colleges they’re attending.”

The Class of 2022 began to trickle out of the quad and the toys were put away. An evening of escape from the inevitable pressure of an incoming adult world allowed for them to reflect together and look forward to the future.