Janine Cobian is enthusiastic for the boys’ volleyball season 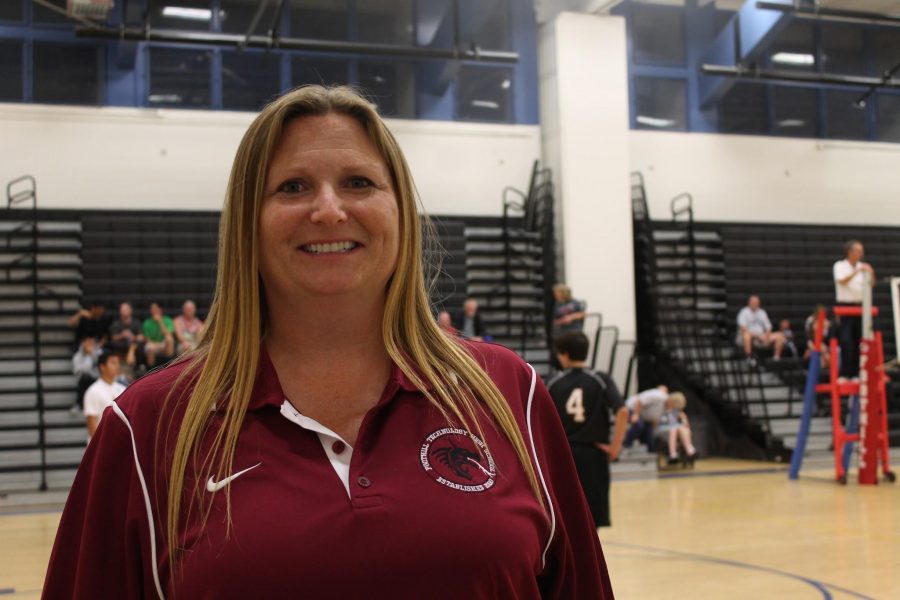 Coach Janine Cobian is ready to jump into the first Foothill boys’ volleyball season with a positive attitude. Senior and varsity player Aaron Hooks believes that what sets Cobian apart from other coaches is her encouraging mindset.

Coach Janine Cobian is ready to jump into the first Foothill boys’ volleyball season with a positive attitude.

Senior and varsity player Aaron Hooks believes that what sets Cobian apart from other coaches is her encouraging mindset.

“I like that when we mess up or make a mistake, she is really positive. She just tells us how to improve so we don’t make it again,” Hooks said.

Cobian’s experience with volleyball is part of why Foothill Athletics Director Emily Stevens hired her. Compared to other coaches who applied for the job, Cobian “brought the most to the table” and showed that she was the best for the position.

“Coach Cobian had extensive experience. It seemed like a great fit with all [her] experience and commitment to teaching boys the game of volleyball,” Stevens said.

Cobian was first introduced to volleyball in high school when she was approached by the coach of her school’s girls’ volleyball team because of her height.

“I was probably the tallest girl in school. They [the coaches] kind of picked me out because my head was above everybody else’s head and said, ‘Hey, do you want to play volleyball?’ and I said, ‘Sure, why not.’ I tried it and fell in love,” Cobian said.

She started coaching local volleyball in high school at the age of fifteen as a way of “giving back to the community,” and played from sophomore year until she graduated.

Later on, Cobian received a scholarship for volleyball and went on to play at Ventura College. Then, she moved on to play in the AVP.

Cobian enjoys coaching the boys’ volleyball teams at Foothill because of the energy and positive attitude from everyone.

“Sometimes we have to pull them back to focusing on volleyball, but they’re great kids and we’re really, really enjoying it,” she said.

Stevens believes that Cobian and her staff work especially well with the team. As a team, they have created a good atmosphere amongst the parents and players.

“She’s fantastic. She has two sons so she’s great with the boys and then her staff, Tim Coonan [assistant coach] and her husband Oscar [Cobian] who coaches with her,” Stevens said. “They’re great with the boys and the parents. They really know the game of volleyball so they’re able to teach it and make it fun. Most of our boys are playing volleyball for the very first time, so they’re able to teach them a very good foundation.”

The team has faced very few difficulties so far this season, except for the issue of having a place to practice, which has been an issue among most of the Foothill sports teams.

“The only challenge I would say that we had is maybe trying to get some gym time because we don’t have our own gym. We’re using Cabrillo and that’s a little bit of a challenge,” Cobian said.“As far as the boys go, they’re fully committed, and we haven’t had any challenges with them.”

Cobian believes that both the junior varsity (JV) and varsity teams are filled with players who have great personalities and positive attitudes.

“These guys are awesome. JV and varsity are both just great boys. All of them are successful and they’re all doing really well,”Cobian said.

Compared to previous coaches, Hooks believes that Cobian’s positive attitude is what makes him want to work harder.

“She just brings the best out of me as a player and a person. She just has a kind heart and I’m really happy that she’s my coach,” Hooks said.

Cobian believes that freshmen Kyle Cobian and Chad Talaugon, two varsity players, have stuck out in a positive way. They both have been playing the position of setter for this season despite not having experience in the position.

“They have really stepped up and worked hard to learn the position and just maintain composure in that position. It’s a really hard position to play. If you don’t know it and it’s new it can get frustrating, but they’re doing a great job,” Cobian said.

She also believes that freshman Jerod Frederick and the “middles” senior Aaron Hooks have made an impression on her by the way they have been playing.

Cobian believes that the team will do well during the season.

“The future looks fantastic with all of our freshmen. In about a year or so I think we’re [going] to be dominating the league,” she said.

Cobian is very proud of her team, and is proud of the achievements and improvements she has already seen. She appreciates their dedication to the game and their work ethic.

“I wish I could say how well these boys are doing and how hard they’re working and how committed they are. They not only come to practice but they’re early, ready to go; they work hard. They’re developing and we’re proud of them. Both JV and varsity, it’s a great group of boys,” Cobian said.