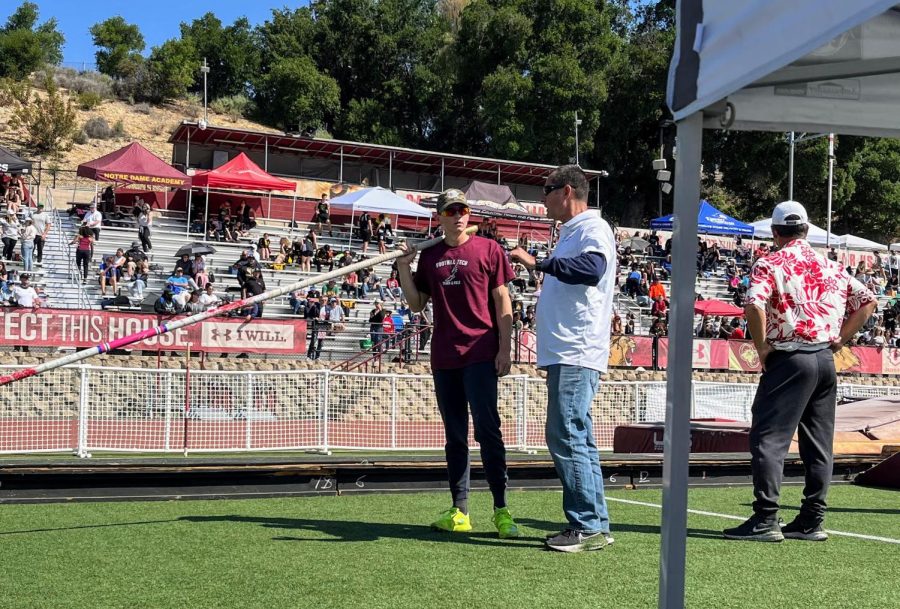 Aiden Haggerty ‘22 prepares to warmup at a recent invitational by discussing his jumps with a coach.

Aidan Hagerty ‘22 is described by one of his coaches, Victor Birasowski, as hardworking. He says, “He came to my house every morning at 6:25, in the morning before school, and we did an hour of work. We do it five times a week, he has never been late.”

Hagerty has used hard work and determination to build his way up to second in the state of California for pole vaulting. As a sport that is competitive and technique heavy, Hagerty has used what he already has and worked to get to his goals.

“D1 scholarship, then Olympics,” says Hagerty, who has dreams and goals for his future. Starting vault when he was just a junior, in a year and a half he built his way up to the top.

Being a unique person, Hagerty lifts weights every day to build up the strength he needs to get over the pole. Also using arm wrestling as a fun way to build strength, he competes in many arm wrestling competitions around Ventura County, where he plays to win.

On March 12, Hagerty reached his goals after flying over a top height of 15’ 6” with a Personal Record (PR) of eight inches. After this, colleges were seriously looking for him, since he moved from fifth in the state to second in the state of California, in just one day. Also having the achievement of taking the boys pole vaulting school record for foothill tech.

His fellow teammate, Cadden Wu ‘22, describes Aidan, saying, “Aidan is really hard working. When it’s not pole vault time or during school practice, he would go up north with a private vault coach and constantly practice there,” and he ends with, “he deserves it all.”

Being known for his hard work and holding the top pole vaulting record at Foothill Technology High School (Foothill Tech), he walks around with pride. You can often find him in math teacher Wayne Powers’ classroom, challenging people to arm wrestling. Arm wrestling not being the only unique thing about him, Hagerty can always be found wearing his signature army hat. When working, running, and even vaulting, Hagerty has never taken the hat off. “I’ve never met someone that wears a hat while vaulting, Aidan is cuckoo,” says Coach Birasowski.

When being asked why he started vaulting, he says, “because it’s fun. It’s got a lot of technique, which is something that I’m good at.” Hagerty works whenever he can, which means a lot of coaching, “I’ve got four coaches, and my grandfather has helped out a lot too,” he says.

Being offered scholarships by all of the Universities of California and some Cal States, Aidan is looking into California Polytechnic State University (Cal Poly) because, “they have a great vault program. I’m also going for biochemistry.” Wanting a good education and a good vault program, Hagerty is keeping his options open, wanting to stay in California for college.

Aidan follows up by saying, “Pole vault is one of the things that the most obsessed people in the sport seem to reach the top. If you don’t put in all of the work that you can outside, you’re not really going to jump that high.”

As someone that uses determination and work to get to his goals, his teammates, family, and coaches all believe that if he keeps working the way he is now, he can reach his Olympic goals. Hagerty claims the best thing about pole vault is, “Getting higher up in the air, it’s a nice feeling when you fly.” With good habits and a good path, Aidan is sure to continue to fly at a great college, and leave his legacy on the fascinating sport of pole vault.