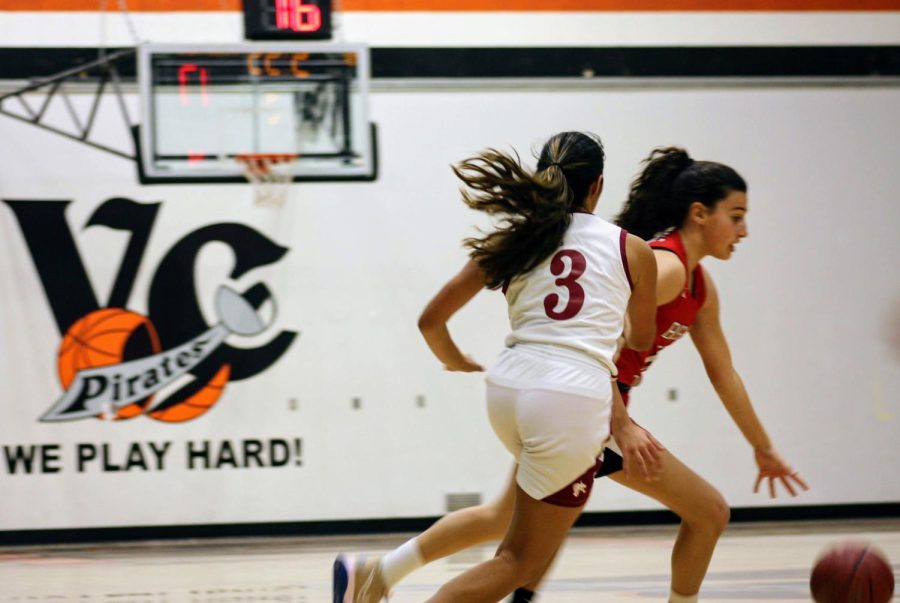 Playing intense man-to-man defense, Esmi Casarez '23 runs alongside her opponent in hopes to steal the ball for a fast break.

The recent rise of the Covid-19 Omicron variant has emptied out gyms and limited spectators around the country, but high school sports have yet to slow.

The first league game for each team started promisingly for Bishop Diego, who possessed the opening tip-off and drew a foul for one layup. They were unable to convert the three-point play, but drained a three-pointer on their next possession to jump out to a 5-0 lead over the Foothill Tech Dragons.

The Dragons junior guards were able to close their early deficit when Olivia Huynh ‘23 hit the first of her several three-pointers, and tied the game on a transition layup from Esmi Cesarez ’23.

The teams traded a variety of threes, layups and midrange jumpers, but Emma Bartlett ‘22 ended the first quarter by shooting 1-2 from the free throw line, pushing the Dragons ahead by one, 13-12.

To start the second quarter, Dragons Coach Chuck Ferris showcased his coaching chops by drawing up a perfect set play to open up Cesarez for a wide open layup.

The rest of the quarter featured the referees more than the athletes: with the Dragons and Cardinals shooting eight and five free throws, respectively.

Despite the choppy rhythm of the game, Dragons star Rome Falcocchia ‘22 made her presence known, both from the free-throw line and the field. Going 3-6 from the line and making two field goals in the period, Falcocchia led her team to a five point lead at half.

Foothill Tech’s frontcourt continued their dominating ways into the second half, as Falcocchia and Chloe Scofield ’22 combined for a series of blocks, steals and acrobatic finishes at the rim.

Reflecting on the third quarter, Falcocchia said, “we came out much more intense, and our defense opened up more offense opportunities, so we were able to get some steals which led to some easy layups.”

With the Dragons on the brink of breakaway, the Cardinals answered Cesarez with three of their own to bring the score to 31-24; but that would not be enough to halt the wave of Dragon momentum.

Foothill Tech caught fire, out-running and out-gunning the Cardinals in transition and the half-court. Ashley Kaller ‘23 compiled a one-player run with a leaping steal, three offensive rebounds punctuated by a put-back tip and one more steal before finishing a layup through contact.

Bishop Diego sprinkled three-pointers between the Dragons’ runs to keep the game within reach, but the Foothill Tech juniors continued to shine. Huynh, Cesarez and Kaller combined with Mia Gray ‘23 to pull ahead of their opponents 49-37 going into the fourth and final quarter.

Midway through the fourth the Cardinals made their run, ripping off a 10-2 run and pulling to within 62-49, but Cesarez and Huynh took over the quarter to guarantee the win. The two guards took turns feeding Falcocchia in the post for easy buckets, and Huynh compiled a series of transition layups and a three-pointer to secure the 68-52 victory.

Following the win, Huynh remarked, “we came out really determined to pull ahead, we got a lead in the second quarter, but when they came back we really wanted to pull ahead even further.”

Looking forward to the rest of the season, Coach Ferris shared an optimistic outlook, saying “our plan is to roll through the league, I think we learned a couple lessons tonight and we just can’t slack off on defense. If we come out as tough as I know we can, we will make other teams nervous.”

Unfortunately, the girls next two league games have been postponed, but their next scheduled game is set to take place against Dunn School on Friday, Jan. 14.