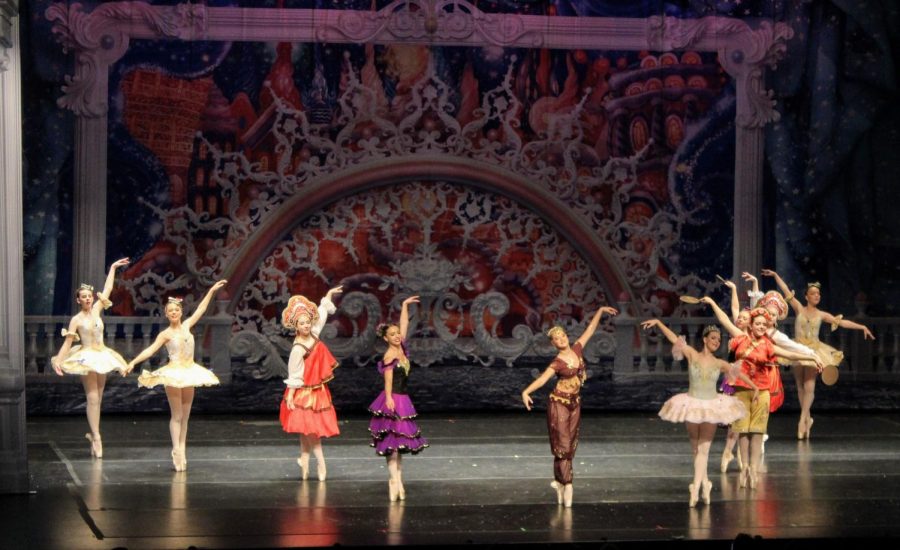 The Ballet Academy Ventura dancers extend their arms, gracefully welcoming the audience into the dreamscape lands of "The Nutcracker".

With the holiday season in full swing, many eager Christmas-lovers are on the prowl for a festive atmosphere, ready to get into the merry spirit. From staying in and making cookies to going out and ice skating, an abundance of activities are sure to stimulate that warm, fuzzy feeling inside. This feeling can also be ignited within the world of art—particularly the world of ballet.

On Dec. 11 and Dec. 12, the Rancho Campana High School Performing Arts Center held a buzzing full house filled with little girls in petticoats, teenagers in groups, proud fathers with bulky cameras and everything in between. All were there to enjoy a long-awaited production: “The Nutcracker”.

Local establishment Ballet Academy Ventura (BAV) performs sensational shows each year of “The Nutcracker”, a ballet rendition of E.T.A. Hoffman’s classic tale “The Nutcracker and the Mouse King”. Following the musical score by Pyotr Ilyich Tchaikovsky, the two-act production creates feelings of heartfelt nostalgia as it guides the audience through the magical journey of imagination sprinkled with innocence.

“The Nutcracker” follows Clara Stahlbaum, a young German girl who grows fond of an awkward Nutcracker doll gifted by her godfather, Herr Drosselmeyer, at her family’s holiday party. She later falls asleep with it and sinks into an eventful dream where she finds herself shrinking as Toy Soldiers and her Nutcracker become life-size—along with large, hungry Rats led by their Rat Queen. After an arduous battle, Clara saves her Nutcracker and conquers the Rat Queen, transforming into a princess and the Nutcracker, a prince.

Together, they venture through the Land of Snow, welcomed by dancing Snow Fairies before they arrive at the Land of Sweets. Greeted by the Sugar Plum Fairy, the pair are rewarded with a celebration of dances that lead into the Waltz of Flowers, where they also meet the Dew Drop Fairy.

The dream then ends as Clara awakens by the Christmas tree with her Nutcracker doll by her side.

Translating this story through an abundance of beautiful costumes and impressive choreography, BAV’s tremendous effort shone on stage. Under the guidance of executive director and founder Kathleen Noblin, choreographer Marina Fliagina and instructor Emi Goleta, the student dancers gave a high quality performance, each scene being a cohesive body of art.

Ella Hoyt ‘22 shares her experience preparing for the ballet as Rat Queen and Dew Drop Fairy, saying, “we started in September with auditions, and we’ve been rehearsing every weekend. Rehearsals were six hours, sometimes more.” Hoyt carries 13 years of experience with BAV.

This intense practice schedule was unquestionably the most challenging aspect of preparation according to the cast.

“I’d say the hardest [part] was just the long days and [the amount] of work. When we’re not in rehearsals, we have five to six classes a week, and those were just normal. So, it’s a pretty intensive schedule, but I think performing [makes it] all worth it,” Miranda Aguilar ‘25 shared. Aguilar, a 10 year veteran with BAV, played the roles of Clara, Columbine Doll and Flower Fairy.

While the first act predominantly focused on storytelling and the second act was mainly composed of different themed dances, Hoyt and Aguilar came to a consensus of their favorite scene to dance in: the battle scene. “I hadn’t been in it for a while—since I was Clara actually—and it was really fun to act,” Hoyt comments.

Russian variation and Battle Rat dancer, McKenna Parcher ‘25, stood in the middle ground, “I love my variation, but it is fun acting in battle. I like both equally.” Parcher has been dancing with BAV for nine years.

With memorable melodies ringing in your ears and stunning visuals imprinted in your mind, “The Nutcracker” is a great show to get you into the holiday spirit. As shown by the BAV production, this timeless tale is truly a joy to watch for all ages. Our Ventura community unites for a happy holiday, all while appreciating a beloved, traditional story told through the art of ballet and music.